I’m not really the biggest fan of Fiction House pre-code comics from the 50’s… sure, Ghost and Monster have great covers and are full of top notch art, but nearly everything I’ve read from their horror titles so far contained very little in the writing department considered “on par” with the pretty pictures. So, for the next few days this week I tried to find a sampling of stories that are better than the usual FH fare, and oddly enough all of these examples come from the 1953 issue of Monster #2, starting with this fun little Monster-fest by Johnny Belcastro featuring 7 crammed pages of inspired art and ideas with a creepy, rampaging, tentacled Squiddly Diddly monster straight out of Lovecraft, (and totally keep your eyes peeled for the hilarious “Austin Powers-esque, Nudity Obscured” panel at the top of page 2.) 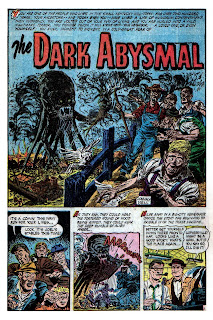 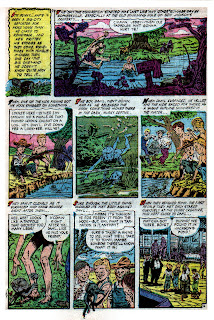 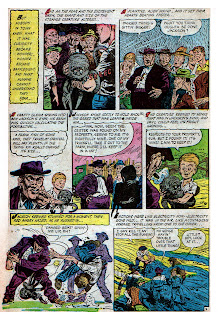 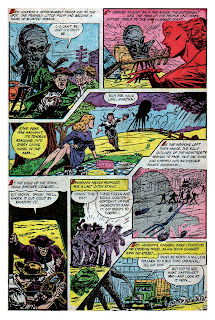 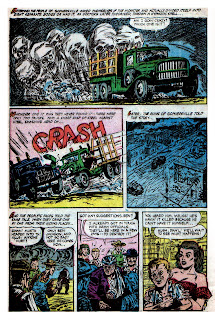 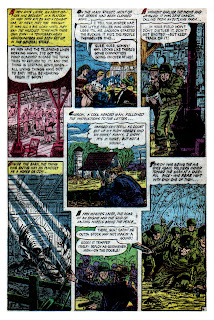 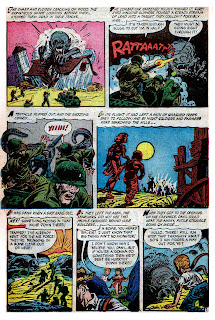 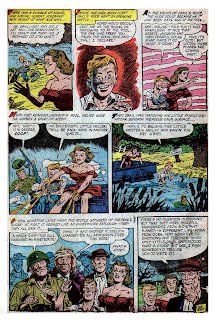 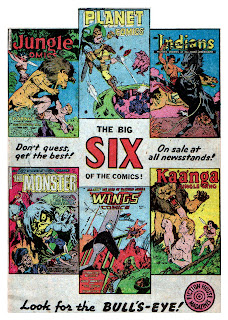 Well tan my britches, Jethro, whaddeya reckon that alien thing was a-doin' in Jackson's POND? Maybe they done set down thar and wanted theirselves a DRINK. But what they really come for was a little LOVE, I 'spect.

Yes, the love of a young tow-haired boy. Only one that done understood them li'l ol' love-hongry alien bastards. A little boy name o' Dan'l. Not Daniel, just Dan'l. And Dan'l had a sister, you see, and a mighty fine lookin' gal she was. Tended to crop up in the middle of things, all the time. And she helped Dan'l save that little bastard, on that fateful occasion.

An' arter them aliens done went 'n' FOUND the love they come all the way across the galaxy to find, they went on home to their own planet.

And you know who that tow-haired young'un was, son? Why, he was YORE GRAN'PAPPY, that's who!

The story itself isn't bad, but the story-telling is terrible and fairly amateurish (can't have the reporter as your narrator when he's never an active (or present) participant).

The name of the town, Gophersville cracked me. You're right that's some bad writing, but at least that alien/monster was scary looking!

Funny Black Walnut, I like how you lost yer place there for a sec but immediately found it again in the same hillbilly manner. A classic comment.

And Todd, somehow I just knew I'd be hearing from you today, Gophersville of course located just round the bend from Dogpatch afterall.

Okay gents, if you think the writing was bad today wait'll you see tomorrow's tale. The zombie art sho' iz perty though.

I LIKED THIS ONE AND DIDN'T THINK THE WRITING WAS ANY WORSE THAN MOST STORIES REALLY. IF THE POINT IS TO BE ENTERTAINED THEN I CERTAINLY WAS.. WAY COOL MONSTER AND I LOVE THE PANEL ON THE BOTTOM LEFT OF PAGE 6 WITH LIGHT COMING IN AND IT JUST SITTING THERE EATING. I CAN CERTAINLY SEE THIS AS A SCI FI MOVIE FROM THE 50S, ESPECIALLY ONCE THE MILITARY GET INVOLVED.

Dane: "The Friendly Little Polyp" should be the new mascot for the Proctology Awareness Council.

I liked the idea of the creature reacting to the emotions around it, and as a native Arkansan I loved the tip of the hat to Lil' Abner's fashion sense and rural patois. But I'm still having trouble figuring out where they got "The Dark Abysmal" as the title. Sounds more like the sequel to a movie about a 3-armed Judd Nelson...

Don't y'all forget about me...

German for octopus is sea polyp (Seepolyp). Glad the thing didn't die at the end.

He is the same artist who illustrated the story "Ghost of the Gorgon" from Ghost Comics #10, also from Fiction House.