The Monster from the Mound!

I’ve set aside the Horrific series fest for another day or two and by popular demand adjusted the coordinates of the THOIA Time Machine for the January 1973 issue of Chamber of Chills #2, where we find yet another great Robert E. Howard horror classic adapted by Roy Thomas for Marvel Comics, with art by Frank Brunner. 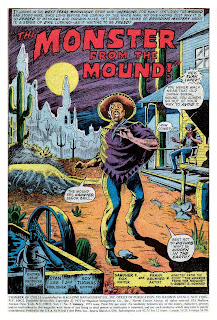 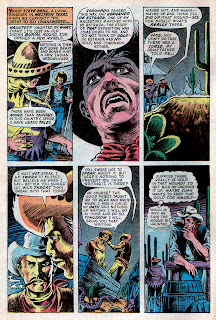 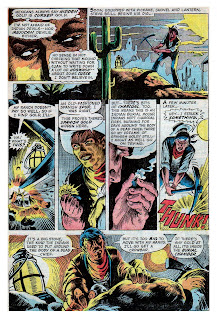 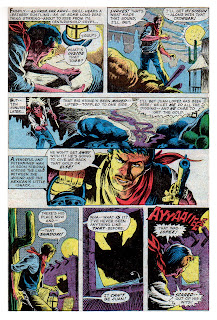 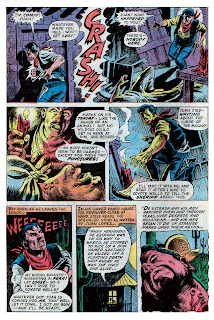 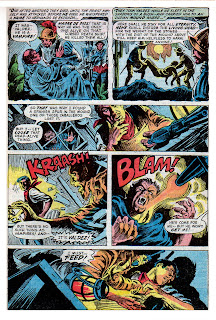 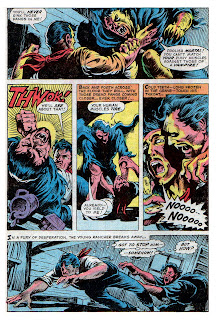 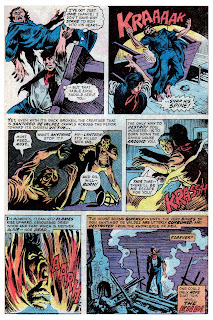 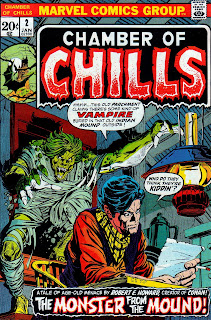 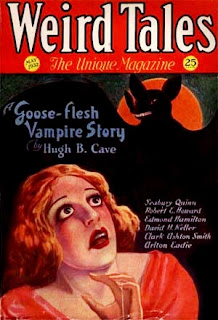 Originally published in the May 1932 issue of Weird Tales as “The Horror from the Mound” this odd vampire western hybrid was actually one of the first REH tales I ever read… and when I did, it literally made my skin crawl! The vampire creature seems much more terrifying in the original than Brunner's more human-ish visualization for Marvel, here is an excerpt:
“At the window a face glared and gibbered soundlessly at him. Two icy eyes pierced his very soul. A shriek burst from his throat and the ghastly visage vanished. But the very air was permeated by the foul scent that had hung about the ancient mound. And now the door creaked—bent slowly inward. Brill backed up against the wall, his gun shaking in his hand. It did not occur to him to fire through the door; in his chaotic brain he had but one thought—that only that thin portal of wood separated him from some horror born out of the womb of night and gloom and the black past. His eyes were distended as he saw the door give, as he heard the staples of the bolt groan. The door burst inward. Brill did not scream. His tongue was frozen to the roof of his mouth. His fear-glazed eyes took in the tall, vulture-like form—the icy eyes, the long black finger nails—the moldering garb, hideously ancient…”
Posted by Mr. Karswell at Tuesday, February 17, 2009

I remember reading the original story last Halloween, and it scared the bejeebus out of me. Definitely a story to read in the daylight.

It's too bad Marvel never did REH's 'Pigeons From Hell'. That would have been cool.

VERY COOL COWBOY HORROR STORY. HOWARD OBVIOUSLY HAD ALOT MORE UP UP HIS SLEEVE THAN JUST CONAN AND KULL........THE EXCERPT FROM WEIRD TALES MAKES ME WANT TO READ THIS NOW TOO. REALLY LIKE THE BRUNNER ART HERE, REMINDS ME OF GENE COLAN A LITTLE BIT. GREAT STUFF KARSWELL, THANKS!!

Even if Brunner didn't capture the essence of the beast, I still dig his artwork on this one. It's crazy to see a character desecrate a grave in a horror comic...and get away with it!

Joan Collins co-starred in an old [1950's? It was b/w] Western which prominently featured a vampire. I've only seen it once, perhaps 20 years ago; can't recall film's title.

This is the story that inspired STRANGEWAYS. True story!

one of my favorite howard tales and the comic version is pretty good too but he looks too much like colans tomb of dracula. the vampire is scarier in the old story.

Love that story. Chamber of Chills #2 is high on my list of all-time best comicbooks.

The monster may be a bit commonplace, but the tension in the artwork was what built the story. Also does CURSE OF THE UNDEAD(1960)ring any bells, Cindy?. I don't know if that has Joan Collins in it, but i'm sure you are not thinking about BILLY THE KID VERSUS AN AGING JOHN CARRADINE.

Hmmm, I have no idea what movie Cindy is talking about either, but I did discover that Joan Colins is starring in a new UK film (currently in production) which is actually yet another remake of The Wicker Man?! Also starring Christopher Lee, the relevant twist here---it's gonna be a western! Titled "Cowboys for Christ" the synopsis on IMDb reads as follows:

Young Christians Beth and Steve, a gospel singer and her cowboy boyfriend, leave Texas to preach door-to-door in Scotland . When, after initial abuse, they are welcomed with joy and elation to Tressock, the border fiefdom of Sir Lachlan Morrison, they assume their hosts simply want to hear more about Jesus. How innocent and wrong they are.