Another nifty crime tale today from the October 1953 issue of Witches Tales #21, this time from the great Howard Nostrand, and like yesterday’s tale this one also found it’s way into a TV adaptation on the Alfred Hitchcock Presents show… but I’ll be damned if I know what the episode is called. Someone wanna help me out here? I’ve probably seen this episode a dozen times but I’m totally drawing a blank on it, even glancing through the AHP episode guide at IMDb doesn’t prove to be much help. Wah!

[The Alfred Hitchcock Presents episode was apparently made for the 1985 revival series and was called-- uncreatively-- "Happy Birthday". -- Nequam.] 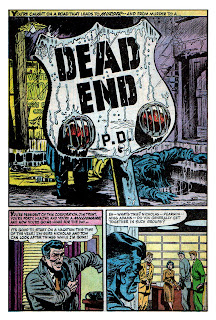 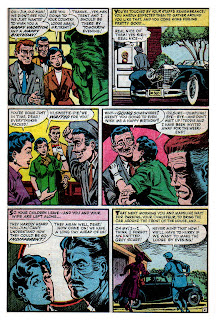 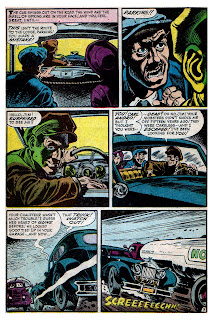 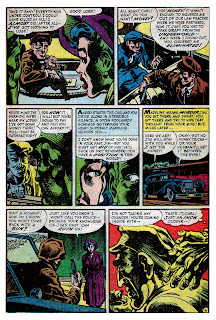 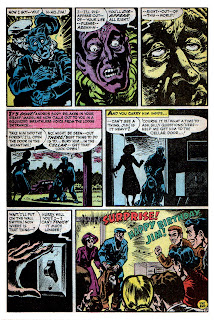 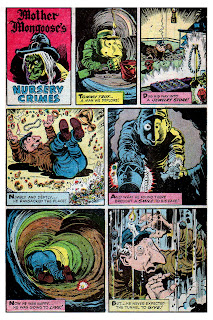 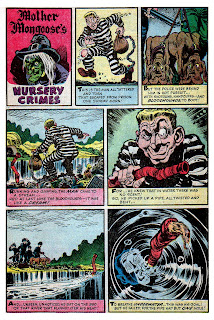 Oh, the embarassing things we have to put up with on birthdays. I've had experiences which could honestly qualify as WORSE than this. I laughed at the rhymes, i know Nostrand was so good many thought he was Jack Davis under a different name, but what they don't know is that Melvin Mole also did some moonlighting for Harvey!. Really like the Hitchcock theme you're working up, that show is the only reason i still watch Chiller.

Probably the very best way to trick a deadly mobster up to his surprise party is to terrorize his family with greedy vengeance from his hidden past. I mean, it's not the journey that matters, just the destination.

Say, I loved the art and especially the coloring on this one. Thanks.

Oh, Prunella. That was a beaut.

I was a little confused on pg. 2 as to whether the people at Jim's house and the people at his office were supposed to be the same group--they look startlingly alike, just in different clothes. I guess the artist ran out of his stock of faces. However, to the artist's credit, I do love that "husband/wife whisper" shot in the middle of pg. 4.

I also like the spunk of Jim's wife. "Listen dear, I don't know what horrible things you've done in your past, but one thing is clear: YOU GOT TO WASTE THIS PUNK!"

The Mother Mongoose tales are a nice treat. The swirly death-eyes are a cool touch.

If you need more Mother Mongoose, I posted a whole slew of Nursery Crimes back in May of 2008 here:

I HAVE SEEN THIS AS A HITCHCOCK EPISODE TOO, IT'S A CLASSIC. I WILL GAZE OVER THE EPISODE GUIDE AND SEE IF ANYTHING RINGS A BELL TOO. LOVE THOSE NURSRY CRIMES!!

"J. Jonah Jameson: the Early Years" ;)
He probably got away by blaming Spider-Man for the murder. ;)

Great art in this one; the very first panel was particularly stunning. The ending reminded me of a 'Tales from the Crypt' episode wherein a jealous husband kills his wife and best friend (her alleged lover), only to find out that she was pregnant and that they had set up a surprise party for him. Ouch.

Another terrific crime story idea, and perfect for Hitch. I've seen that episode, too. Tried to locate it, but no dice. Got to thinking Gary Merrill was in it. He did a bunch of AHPs, but not that one. Ah, well. Something else to keep me awake, and take my mind of the price of turnips...

good gravy, i go away for a few days and Lux Interior dies? i was just telling a co-worker last week that i'd seen The Cramps more times than any other band(5 times). sorry i'm late on this topic but i'm just shocked. i haven't even read any of yer posts yet! what a life he lived though. he's dead and i'm still envious!

Clever of ol' Tommy Trot to dig a tunnel in the shape as his head and shoulders coming into a place, and then in the shape of his buttocks going out. Guarantees he won't get stuck. Well, unless it caves in. Friggin' Nostrand, man. Gotta love him.

This is one of my all-time favorite pre-code horror stories. Love that ending!!!

Dead End was remade in the 70s in one of those black and white extra-gore mags. The only difference was that the businessman beheaded the limo driver with a sword cane, and they walked into the surprise party just carrying the head. Ah, good times.