We finish out the work week with a wonderfully ridiculous A. C. Hollingsworth skeleton classic from the October 1953 issue of Dark Mysteries #14. So was this a fun week of posts and comments or what? And next week I have lots of good stuff lined up too, in particular a couple mind blowers from a notorious issue of Weird Mysteries.

And stick around this weekend for another 2-day theme--- that is, unless you have a thing about creepy killer clowns... 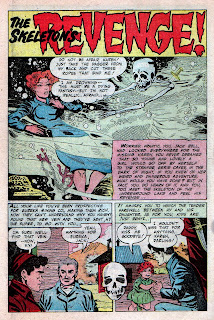 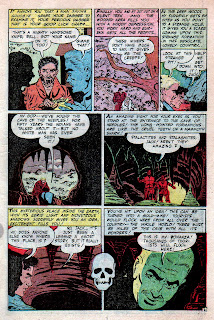 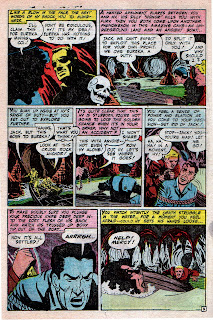 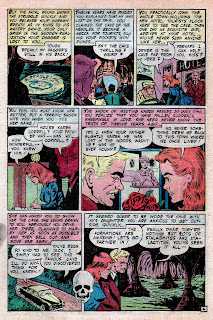 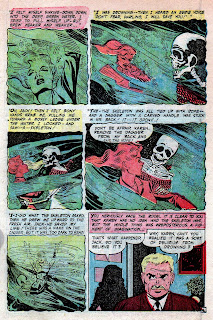 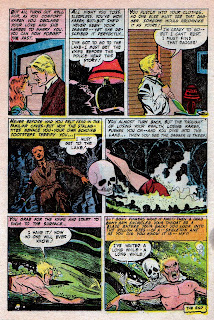 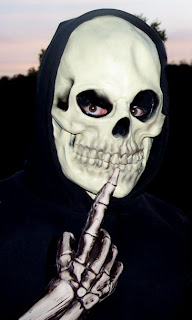 Speaking of skulls, I’ve had a few people email me asking about my Halloween mask from the “Cryptic Cadavers” series by PMG Halloween. It was purchased at one of the many local Johnnie Brock’s Dungeon stores here in St Louis MO for $20.00 ...though it is of course available online as well. Click HERE. And yes people, that was NOT my real face. Sorry!
+++++++++++++++++++++++++
Lost Skeleton Day in Los Angeles! 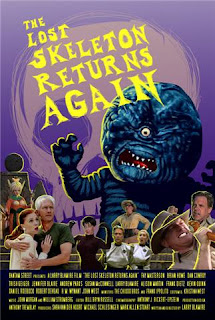 Sunday, November 9 - 5:00
THE LOST SKELETON OF CADAVRA. 2004, Sony Repertory, 89 min. Dir. Larry Blamire. If you missed it before or just need a refresher, here's the original cult favorite! A gleefully deadpan recreation of those ultra-cheap '50s sci-fi horror movies, as a host of stereotypes descend upon Bronson Canyon in search of a meteorite containing a mysterious radioactive element. A rare chance to see one of the most quotable movies of recent years on the big screen. Plus Ub Iwerks' 1937 cartoon classic, SKELETON FROLICS.
Writer/Director/Star Larry Blamire will introduce the screening.
Sunday, November 9 - 7:30
Los Angeles Premiere!
THE LOST SKELETON RETURNS AGAIN. 2008, Bantam Street, 91 min. Dir. Larry Blamire. It's two years later, and the action shifts to the Amazon Jungle, as old friends and new enemies schlep into the dreaded Valley of the Monsters in search of yet another rare element. This bigger, better, bonier sequel moves up the budgetary scale from Ed Wood to Sam Katzman, containing some nifty special effects and a dynamic musical score--along with the expected hilarious performances and Blamire's trademark loopy dialogue. But you can still see the wires!
Discussion following with the cast and crew.

Tickets are available in advance at the Egyptian box office or through Fandango. The Egyptian is at 6712 Hollywood Blvd., 2 blocks east of Highland. For more info please visit: http://www.americancinematheque.com/
Thanks To Larry Blamire for the update!
Posted by Mr. Karswell at Friday, November 07, 2008

am i crazy or did Jack and Hy exchange names on page one? and who's narrating this thing? it must be the delerium from drowning. but i AM really...afraid...

love the little pop-up skulls that appear throughout to remind you to be really...afraid...

Jack is one of the most despicable characters i've seen,he's old enough to be her father(if said father was alive)!,oh well at least Hy triumphed. This post also makes me notice that Hollingsworth draws girls really well,did he gain his (inexplicable)cult following from romance comics?.

So, is the wedding off or what?

Sure Professor, the bubbly word ballons are switched on the first panel of the story. Then, later, the square accusatory second-person narration and the word ballons totally disagree on which character "I" am supposed to be on panel five of page three: JACK MUST DIE! "Don't kill me Jack!".

The artist, who seems only really interested in the underwater scenes at the end of the story, cannot be bothered to place his focal characters into the panels in an identifying way. Sure, Rosencrantz (or is it Guildenstern?) is older, has a mustache, but both characters are frequently so tiny within the busy art that the story, visually, doesn't seem to be about them at all.

So by the time this got to the overworked colorist, I think he just threw his hands in the air, picking whatever hues happened to be on top for the clothes and hair in the first three pages. Guildenstern's (or was it Rosencrantz's?) identifying shades change on the very first page along with the dialog balloons.

Frankly, those two panels at the bottom of page one are the most confusing morass of graphic storytelling flubs I think I've ever seen. Someone should teach a class with this story.

Oh, and teach a class on these sexy cave innuendos, too: "IT SEEMED QUEER TO BE INSIDE THE CAVE WITH HY'S DAUGHTER! ...KAREN DRAWS YOU FURTHER INTO THE INTERIOR--UP TO THE LAKE!" Whew. I need a cigarette.

For years I've been incredibly underwhelmed by nearly everything I've ever seen by A. C. Hollingsworth (you've all heard me rant about this before.) But one day I was over at the Comic Book Catacombs and found Chuck had posted a gorgeous golden age jungle girl story illustrated by AC--- and it totally blew my mind! It was like a completely different artist suddenly stepped in, but lo and behold there was his familiar signature. (Chuck, if you read this send the link for that story on over please.) But as much as I bitch about Hollingsworth and his sloppy horror output, I do think his stories are alot of fun and like today's example, really capture the grimier side of pre-code comics.

I WAS GOING TO SAY FOR SOMEONE WHO DOESN'T LIKE HOLLINGSWORTH MUCH YOU SURE DO POST ALOT OF STORIES BY HIM! I LIKED THE UNDERWATER PANELS ON PAGE 6 ALOT, YOU CAN TELL AC HAS SOME TALENT BUT COMPARED TO OTHER STUFF I'VE SEEN BY HIM ITS OBVIOUS HE JUST RUSHING THROUGH THINGS.

Been gone so long I barely knew the place!

The thing that struck me on page one more than the character confusion was the strange punctuation of the dialog:

And the chubby-cheeked cherub on page 1 can't be more than 2 or 3 years old...which would make her 14 or 15 when Jack starts putting the moves, on--her right?

I also love Jack's thoroughness. "To make doubly sure, you plant a piece of unique and iron-clad evidence against yourself right between Hy's scapulae!" Good work there, dude.

Still, I do like the splash, and the skeleton head on each page. But the "OMG IT'S HY" last panel seemed rather lazy.

Beggars and choosers, I know! Thanks for keeping it real, Karswell!