The Haunting of Sleepy Hollow!

Today is Dick Ayers turn to give us the 20 cent tour around Sleepy Hollow, only this time the setting is a bit more contemporary (for the 50’s, I mean) than yesterday's tale. Originally presented in the July 1954 issue of Uncanny Tales #22 under the title “The Horror of Sleepy Hollow”, it was later reprinted / retitled “The Haunting of Sleepy Hollow” for the March 1974 issue of Crypt of Shadows #9. 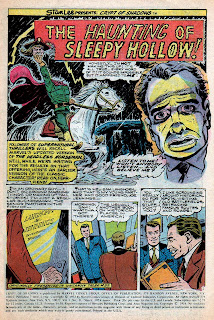 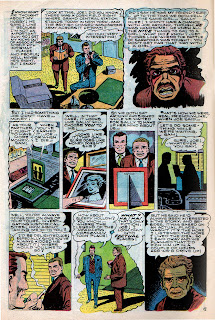 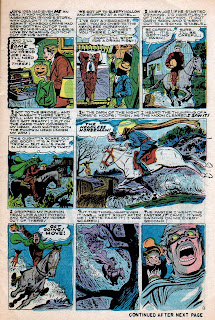 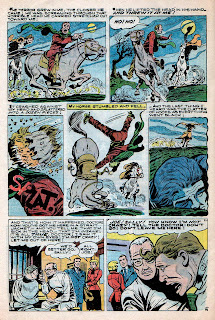 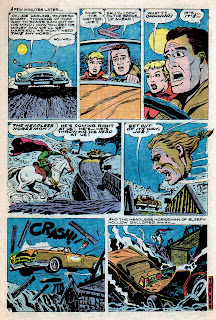 NEXT: The severed heads continue to fly! Plus: a giant rat attack, a violent prehistoric babe on the loose and, um—killer pajamas?! It’s a complete issue of Ajax/Farrell’s Voodoo in its insane entirety this week! Starts tomorrow, don't miss a day of it!

And don’t forget about the THOIA Halloween Costume Murderathon Contest going on all this weekend. If you missed the rules check Friday's October 31st post. FYI: Below is an example of how Karswell kills in kostume AND rekreates the THOIA banner, with all apologies to my niece who splendidly played The Victim! (Wouldn’t this have made a great Aurora model kit?) 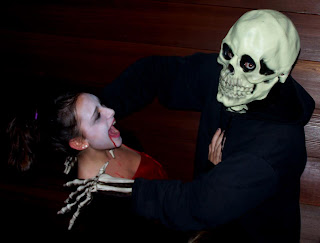 Karswell, why aren't you wearing a costume in the pic? :-D

HA!! HUGOMARINK BEAT ME TO THE SAME JOKE KARSWELL. GREAT PHOTO, LOOKS LIKE YOUR NIECE HAD FUN PLAYING ALONG TOO.

COOL STORY TODAY TOO. LOVED THE HEAD SPLATTER PANEL ON PAGE 4--- EWWW! AND THANKS FOR THE YOU TUBE LINK TO THE DISNEY CARTOON VERSION, I HAVENT SEEN THAT IN YEARS! LOVED IT!

That picture is great. I can only imagine the goofiness, I mean sheer terror, that goes on in the Karswell home at Halloween.

I'd like to thank you for the link too - it was fun getting to watch it again.

A number of visitors got a chance to ride the lightning at the house of Macabre this year, but sorry I didn't get any victim pics (those could be used as evidence after all).

Ah, comedians... the truth is I just couldn't find a mask good enough to recreate my own banner so I merely gave myself a haircut (real close to the scalp) and as you can see I got a little carried away. Facial flesh grows back right?

Tomorrow: You're all DOOMED!

really liked yesterdays sleepy hollow post better than todays but it was still pretty good, ayers is hit or miss with me
the story art starts off looking kind of rushed but the last two and half pages are not bad

This may be the funniest story you've posted ever. When I got to the part where the head bounces off the car door, I laughed out loud. Ayers may not have had the most appealing style, but he could draw just about anything (back in the 50's, anyway). I don't know if people realize how tough it is to draw a running horse. Under appreciated, to say the least.

Really enjoyed this one,and i love how EVERYONE gets what they deserved in the end. As for Dick Ayer's style(Kirby's best inker in my opinion),he was definitely an old-hand when it came to phantom horsemen,he was the definitive artist for ME.Enterprise's GHOST RIDER character,a cowboy who wore a ghostly costume to fight criminals. PS.:sorry i wasn't here for Halloween,i was having one of the wildest parties of my life!but i'll be here next year,and sober i promise!.

i love Dick Ayers' style ,and how it's got "Marvel Silver age" written all over ...
THanks for sharing !