For the next few days we’ll be looking at some really different stories from the March 1954 issue of Weird Mysteries #9, not really the whole issue, but more like a "best of." FYI: tomorrow you’ll be reading one of my favorite screwball cannibal classics... but today is a pre-code tale unlike any other, as it’s serious (dead serious) with an unusually heart wrenching, almost poetic climax that plays out in complete contrast to the whacked-out insanity of the other tales from this issue. So grab a shovel, and maybe some Kleenex, it’s time to head to the cemetery for the final chilling word in undying love from beyond the grave. 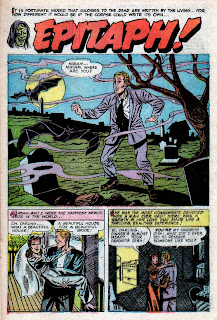 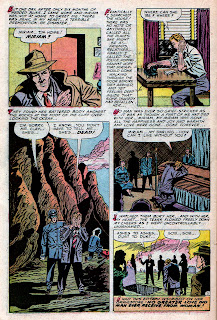 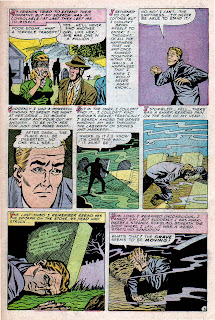 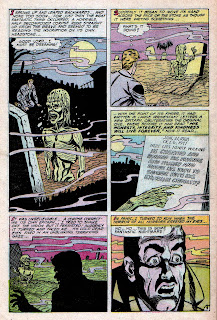 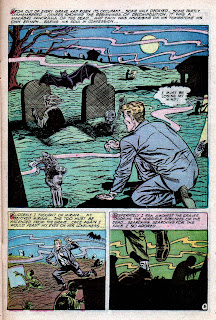 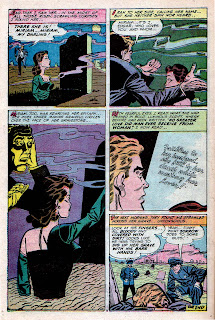 
Fans of NEATO COOLVILLE and WEIRD HOLLOW might recognize the smiling face in this photo--- it’s Mayor Todd Franklin himself wearing his THOIA tee-shirt at St. Louis MO’s first annual Monstrous Weekend Convention. And to top it all he’s rubbin' elbows with Night of the Living Dead actress/scream queen legend Judith O’Dea--- WOW! 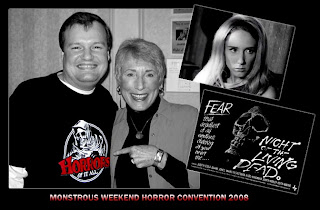 For more neato cool stuff visit Todd’s fab blog HERE, (and for the weirder stuff go HERE.) And fans of Judith O'Dea should check out what she’s up to these days online by clicking HERE as well. Thanks Todd!
Posted by Mr. Karswell at Monday, November 10, 2008

Not perfect in execution, but certainly quite good, and an excellent gimmick for the story, even if the climax was predictable.

huh... wasn't this a poem or short story of some sort? I'm pretty certain I read this somewhere before.

Great story. Well written, some truly inspired ideas, like all those dead writing their true story.

It was based on a story by Guy De Maupassant.

This comic is based on the story, "La Morte," by Guy de Maupassant, which ends:

I liked the de Maupassant rework quite a lot, actually. The narration had a pretty light touch with the clever and mostly no-frills melodrama. I think a better ending might have been the cops finding Mr. Clay dead on Miriam's grave, his fingers scraped bloody by his own delusional or subconscious editorial vandalism of her epitaph. Did he secretly know something he wouldn't admit? Or was he possessed?

But, much as I liked the story, this has to be my least favorite art maybe ever. Lousy with awkward three-quarter perspective, clunky scatter shod composition, and the time-saving shortcut of dirty field crosshatching. At best it reminded me of seasonal 1970's kiddie place mats at Shoney's Restaurant. I've seen better graphic storytelling in fanzines.

Not that I didn't love this, of course. I did, in fact love it precisely because it's such a bewildering specimen of good and bad. Thanks Karswell!

There's an english translation (pdf) of Maupassant's story at HorrorMasters. But I like the added detail here of the man having been digging at the grave. It's nicely ambiguous knowing what he just saw - was he driven by grief, or rage?

Good read! More emotional horror than anything else, and I like the ambiguity too.

And it's Todd! Meeting and greeting the stars! I had no idea that the mayorship was such a glamorous job.

The 4th and 5th panels of the 4th page raised the creep factor for me! I have always been scared when the evil LOOKS RIGHT AT YOU! Whether it is a ghost, killer, monster - whatever - if it goes about it's business oblivious to you, that is one thing. But when it becomes aware of you, when it looks at you, ... eeep ...

I REALLY LIKED THIS ONE, I GUESS I'LL HAVE TO CHECK OUT THE ORIGINAL MAUPASSANT VERSION NOW TOO. I ACTUALLY THINK THE ART HERE IS SUPER, LOVE THE SPLASH AND BIG PANEL AT THE TOP OF PAGE 5 IS REALLY COOL.

tim, thanx for the english translation link! i liked this story- one of man's worst fears horribly realized...

I'll have to check out the original as well. This was as creepy as you'd expect, but there wasn't usually such raw emotion in pre-Code Horror ...

Thanks for the de Maupassant info, that's why you guys are the best readers a blogger can ever hope for.

Tomorrow, more Weird Mysteries--- in fact it's a DOUBLE SHOT! See ya in the mourn..

I would like Shoney's more if the placemats were really horror-themed.

"Why you looking down here? The horror is in your hand."

Whoa--score on the Judith O'Dea thing.

Now this is a good one. Not much in the way of true horror or shock value, this is more melancholy and haunting. The image of the corpses rewriting their epitaphs with the ugly truths their friends and family didn't have the heart to print, wow. That's some pretty brutal stuff.