Okay, if I’ve said it once I’ve said it a million times… any pre-code character who buries himself alive as part of some sort of cunning scheme (diabolical or otherwise) has obviously never read a pre-code comic book. Case in point… 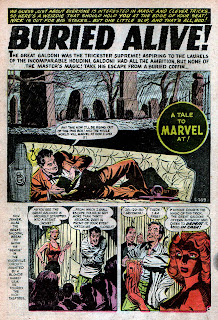 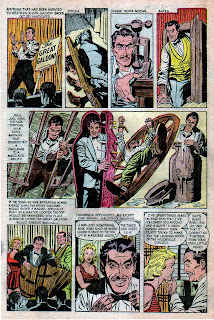 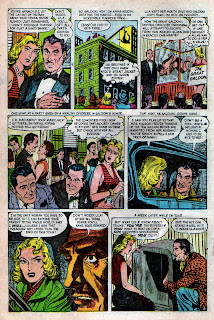 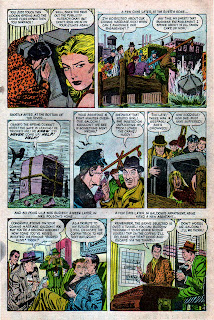 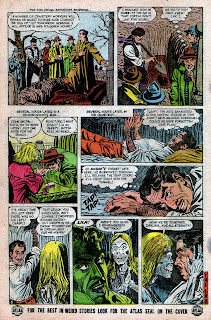 
Another THOIA tee shirt photo surfaces, this time from Sir John Angelo, as he makes the mistake of reading Al Luster’s “They Dive by Night” without first installing flood gates around his perimeter! Whether soaked to the bone in sea water, or drenched head to toe in slaughtered werewolf blood, it’s quite possible that John was merely distracted by the hordes of supernatural evil he battles everyday in Heroscape. 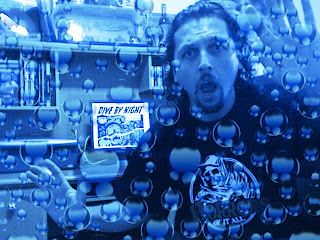 For more about John and his Hex Enduction Hour / Administrative duties, check out his fan site / art thread by clicking HERE. And John, it’s a bit late but your THOIA snorkel is in the mail! Thanks! *glub*glub*
Posted by Mr. Karswell at Thursday, November 13, 2008

Fake magic tricks, clever ways of killing your assistants, and water-logged nympho-zombie girls with reverse necrophiliac tendencies. You really can't go wrong with the old buried alive formula when it's mixed with THAT stuff. Great art too, hopefully someone'll guess the artist.

what a horrifying ending! he ends up stuck underground for all eternity with JONI MITCHELL!!!

for that reason alone, i would say this one was drawn by The Devil Himself...

I love that milk containers and safes and common garage vises are advanced as items "invented to restrain a man." Kinky.

I also love the idea that the populace would get all up in arms if they were to suspect that these magic tricks were mere fakery. (Apparently, Houdini was really actually magical, much to his own chagrin.) Oh the power hot stage assistants across the globe must hold over their duplicitous bosses!

Not that the hot assistant in this story is all too bright. Sure, the spring door pops right open when you press the thing, but probably not when the safe has been roped to a crane in such a way that ties the door shut.

(But today's really scary revelation is the apparent replacement of comment celebrity Horror Pariah by a fake who punctuates English totally differently. What have you done with the real Horror Pariah, Pod Man?)

It´s always a laugh how adult relationships are described in this stories. The boys treat their girls as if they were retarded, for the girls no trick is mean enough to get the holy grail of marriage, so they can really dominate him.

And I guess this must be the first time a zombie uses k.o.drops to win time. (Not to mention that the guy must have been in a delirium already if he didn´t notices anything wrong about zombie-girl.) Today she would eat his face :-)

"what a horrifying ending! he ends up stuck underground for all eternity with JONI MITCHELL!!!"

LOVE THE SPLSH! THIS WOULD HAVE MADE A GREAT BASIL RATHBONE MOVIE

Inneresting - the vengeful undead don't normally resort to Mickey Finns. She seems sharper on the far side of the grave (I mean, honestly! falling for that safe-trick.)

Loving the comments on this post this morning, if ever I needed something to cheer me up you guys are the ones to do it. And does anyone know if this really is Robert McCarty or not?

>What have you done with the real Horror Pariah, Pod Man?)

Haha, I know what you mean Mr C... I've come so accustomed to HP's brand of punctuation that I didn't even recognize his comment here for a sec as him either. He's one of my oldest commentors too, don't know what I'd do without him. A few months back he moved and was MIA around here for a few weeks, a truly terrible time in THOIA history.

I certainly would say ir's Bob McCarty. 1uzt look at those faces on page two.

dont know if this is mccarty but it sure is a good story.

No, my friends i have not been replaced by a pod. It's just that after an argument with a particularly assholish troll on the IMDB who spelled and typed like a drunk immigrant that i decided i was a hypocrite for bashing him for his spelling when a guy my age was typing the way i did; which was mostly out of laziness, at least i spell good give or take a few typos and honest mistakes, i just guess punctuation was never my strong suit(and i know "i" should be capitalized!, it's my trademark like All-Caps's....Caps...). And should i ever be assimilated by a pod or shoggoth, rest assured you'll know the difference if i say anything about Uwe Boll's "talent" and it's not in quotation marks.

I'd love to see that IMDb argument HP! Hey, can you email me? I have a task for you, if you're willing to do it: karswell@hotmail.com

And thanks again everyone for a great day of fun comments. More Atlas terrors tomorrow, as well as all weekend, don't miss any o'it. Cereal.