Return of the Ghoul

Got a bizarro Jay Disbrow creature classic for you today from the Daring Adventures #9 (1963) reprint. This story was originally printed in the October 1952 issue of Blue Bolt Weird Tales of Terror #115. To make things more confusing than ever need be, this issue of Daring Adventures uses slightly modified artwork from the cover of the 1952 issue of Eerie #6. WTF? Whew! 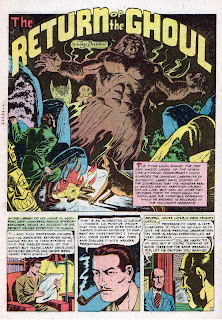 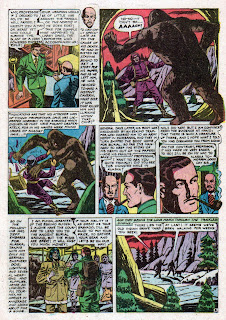 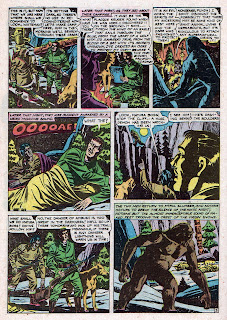 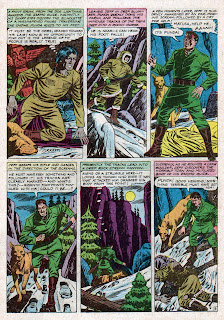 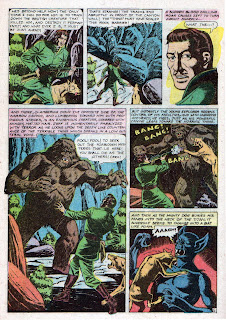 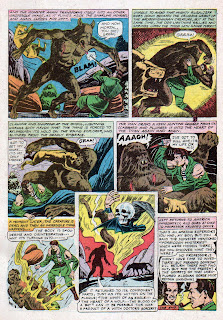 (This issue also contains a fun Sergeant Spook story I plan on posting later this month. More for the kiddies to read...)


KARSWELL HISTORY
FACT: At the tender young age of nine I apparently read 40 books during the ‘77 school year. And as proof, check out my awesome MONSTER Reading Achievement Certificate! 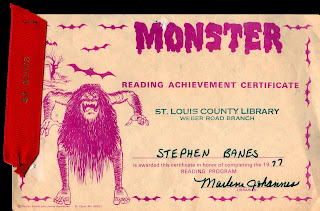 So, what books did I read, you ask? No idea. Probably some Three Investigators adventures, Blubber by Judy Blume, etc... and this total of 40 books of course obviously didn’t include the massive amounts of comic books I surely devoured too that year, but still… pretty cool, especially since it’s got a monster and some bats flutterin’ around in a graveyard and stuff on it.
+++++++++++++++++++++++++++++++++


ALSO FYI: Tomorrow, Wed the 13th on TCM, watch a full day of Peter Lorre classics! Over a dozen of his best films! Check TCM for more info and show times in your area! 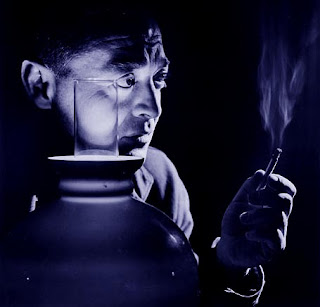 I have to admit i was expecting some kind of twist;like that Davis never really died and Kruger made that up because Davis became the ghoul from a curse or somenthing,it may not have delivered that,but it was still fun to read a great,simple man vs. monster tale. by the way,did Disbrow ink this himself? the inking looks better than almost anything else i've seen by him,almost Wood-esque.

Pre-code weirdness at its best ; never heard of this Jay Disbrow , but he's surely one hell of an artist ; one more reason to thank you for sharing !

Neat monster. :) Sounds rather like the Greenland tupilak - opposite side of the Arctic, but I daresay those old-time shamens got around a bit.

Say it with me, everybody: "Awwwwwww."

THAT WAS ONE OF THE WEIRDEST YETI TALES IVE READ YETI. I DO LIKE DISBOWS STYLE, KIND OF OLD GOLD BUT LOTS OF GREAT DETAIL

YOU USED TO HAVE THAT CERTIFICATE HANGING ON YOUR WALL WHEN WE WERE KIDS DIDN'T YOU? I THINK I REMEMBER IT.

AND THANKS FOR THE HEADS UP ABOUT THE LORRE FEST! MAYBE I'LL JUST CALL IN TO WORK AND SPEND A WHOLE DAY IN MY PJS LIKE YOU DO.

WOW. This tale really kept me guessing! First I thought it was gonna be a Wendigo/Sasquatch tale (I love the Wendigo legend--the re-telling of the story in Scary Stories to Tell in the Dark gave me nightmares as a kid), but then it turned into some Frankenstein/Golem sort of think, and ended up in complete batshittery! Which is the BEST place to end, as we know.

Like Todd above, though, I was distracted by the juxtaposition of some spectacular writing ("The thing which roamed the frozen waste lands of the North was a titanic monstrosity which guarded the unknown labyrinths of antiquity!" Good work if you can get it!) and the absolutely HORRENDOUS spelling/grammar. To wit:

* "His skepticism CAUSED him his life!" Holy homophones, Batman!

* "PLACQUE"? When in doubt as to spelling, use ALL the variants!

Not to mention the author's strange habit of separating compound words into their components...like the GHOUL was separated at the end! Hey, was that META?

There is a lot of great stuff here too though--Tokoma was nice to translate his Inuit spell into doggerel just for us, and the bat/wolf change at the end caught me COMPLETELY off guard. And while Lightning doesn't look much like an Alsatian (unless he's shaved), he still RULES for jumping on the Sasquatch like that. Good boy!

But my favorite line has to be the guide's contempt-dripping line at the top of p. 3: "Where shall we commence to look, WHITEY?" You can tell he's bitter at being talked down to.

And of course "sort of think" is totally intentional and meant to represent the ideas which form in the mind while reading, while making a play on the more mundane "sort of thing." It's ART, people! ;)

So the monster is pretty much made of EVERYTHING THAT IS AWESOME, then? The world needs more Witch Doctors--they're always coming up with crazy crap like this.

Confession: I was secretly hoping for Skunk Ape involvement. Skunk Ape needs some more press, because Bigfoot is always stealing his thunder.

Todd and Vicar already made most of my comments for me.

Is there any reason why the ghoul could be hurt by a knife and not a gun?

And I would not at all be excited to discover someone else's "plaque." Yuck.

Is there any reason why the ghoul could be hurt by a knife and not a gun?

Well, making up a bit of occult lore on the fly... Maybe a magic-created monster, embodying and animated by some surviving part of its creator's mind, tends to be more vulnerable to the things its creator could imagine hurting it. The ancient shamen Tokoma knew nothing of guns, but knives are as old as humanity.

Honestly, I think the animals had the best lines.

It's the whole story in a nutshell, actually. Minus, of course, the strange blob of parts that rises above the melting "ghoul", revealing that he's been fashioned from the right half of a bat, some kind of bird wing, the tail and hind leg of a canid, Yorick, and a galley slave. Bon Appétit!

love the captain caveman certificate too

The man with the pipe is maybe subgenius Bob? Love this story... the mutant Sasquatch it's so funny.

Someone should collect all of Disbrow's horror stories that he did for Star and put out a nice Masterworks-Style hardcover. His stuff is awesome, but usually the only great thing in the Star horror books. Of course, the covers rule earth as well.

More monster mayhem tomorrow, and thanks again to everyone who stopped by and commented. I sound like a broken record but I really do appreciate a good comment.

See ya'lls in the mourn!

"His skepticism CAUSED him his life!" Holy homophones, Batman!

Good Lord. I'm not sure I'd ever have understood that without you pointing it out. I'd likely just take it for granite.

"His skepticism CAUSED him his life!" Holy homophones, Batman"

"I'd likely just take it for granite."

But you'd have mist the point entirely.

With apologies to Harvey Danger.