Tune of the Zombie Queen

I’m going way beyond the norm on the type casting today for the two leads, but imagine how great it would be to see Annette and Frankie in juicy horror roles such as this instead of Beach Blanket Boobfest? Starring Annette Funicello as Doris, Frankie Avalon as Ferdie, Billie Hayes as Ezilie, and Geoffrey Holder as Pedro the Zombie… (with the title theme song sung to the tune of April Wine’s 1981 hit “Sign of the Gypsy Queen.”)
From the April 1954 issue of Baffling Mysteries #20 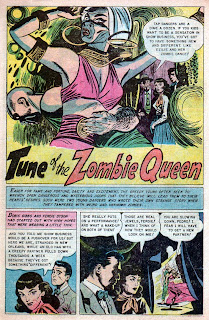 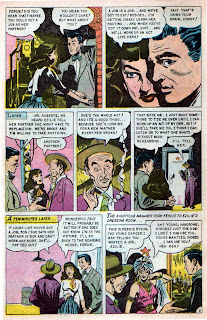 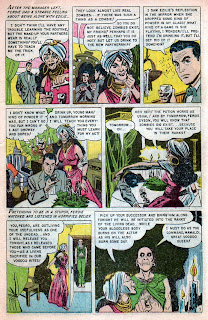 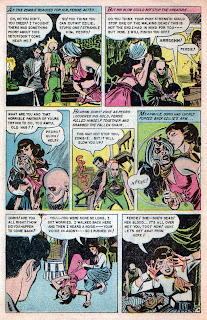 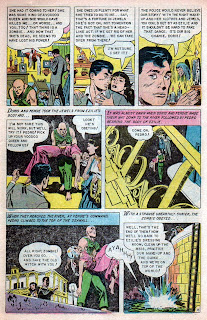 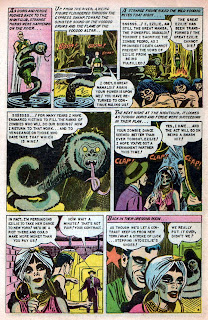 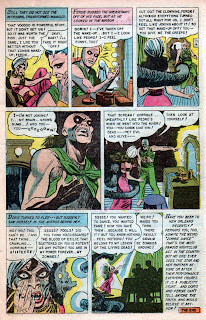 FYI: Pappy's has a wild west werewolf tale by Dick Ayers today too, go check it out pronto but don't forget your silver bullets! Click HERE!
Posted by Mr. Karswell at Tuesday, July 08, 2008

Wow, You have one of the best blogs in the world for freaks like me. I love being able to read these odd ball stories, that would otherwise be unknown, outside of a certain circle of people. thank you, for your hard work. I am just getting back into older comics. I seek out cool colors and strange creatures and new takes on art. I really love that Basil Wolverton one with, Where Monsters' Dwell. he is great and so is that series. I would like to see more of him and that series if you have any. I can only find very few in the stores that do carry that series. but thank you again for sharing your knowledge on this stuff.

Weird and cool lil' jewel , the title sounds like a track from one of Rob Zombie's albums,and the story is miles away from the usual tale of revenge from the grave ,even the demon Mamaloi is menacing despite his "muppetish" looks ...
Thanks for sharing !

ANOTHER GREAT ACE TALE, THIS HAS SOME SUPER FINE ART AND A COOL TWIST. LIKE I SAID YESTERDAY, I'M TERRIBLE AT THE CASTING CALL GAME BUT HOW ABOUT THE DUDE FROM I WALKED WITH A ZOMBIE AS THE ZOMBIE HERE TOO?

AND NOW I HAVE THAT APRIL WINE SONG STUCK IN MY HEAD ALL MORNING EVEN THOUGH I HAVENT HEARD IT IN 20 YEARS! THANKS

"Learn her routing! After that, we'll piggyback on her DSL!"

As for casting, I'm all for Frankie and Annette. As for the rest, only Eartha Kitt could pull off the role of Ezilie! Pedro from Napoleon Dynamite as Pedro--typecasting is a bitch, but there you go. :) And John Waters as the nightclub owner.

Blood on hands at bottom of pg. 4 == AWESOME. Would love to see Annette pulling that scene! And of course only in New Orleans would the clubgoers not even notice the Jim Henson's workshop creature coiled in the shadows watching the act! Laissez le bon temps roulez!

Ok, I'm down with the Frankie and Annette casting too, and I like the vicar's choice of Eartha Kitt for Ezelie. My choice for the big lug is Ted Cassidy. He can even come straight from the set of that Star Trek episode he did, "What Are Little Girls Made of," because that's the look!

Another amusing and creepy story today Karswell! I decided to cast the characters today as follows:

Ha ha, man... everyone's crackin' me up today with their Casting Call choices. It's funny to see how people think, or don't think, or overthink, hee hee.

To the first comment, there's a bunch of Basil Wolverton stories in my archives, just dig around and you'll find them. And thanks for stopping by too... I'll definitely post more Wolverton in the future, as soon as I aquire more!

I like Patrick's choices, except instead of Sandra Bullshit how about Diana Rigg as Doris.........

As I was reading Ezilie's text, I kept hearing Madame Zena's voice in my head, so I would cast a younger Sylvia Miles in her role. Her zombie-puppet, Pedro, couldn't be played by anybody but Ted Cassidy.

Casting the roles of Doris and Ferdie (why do the men always have such weird names in these comics?) was tougher; they didn't seem to come naturally to me. Then, it hit m: John Astin and Carolyn Jones should join their pal Cassidy. An all-star Addams cast would put aces in the seats, don't you think?

The Great Mamba Snake Thing would be played by Amy, the fake gorilla from CONGO. In order to make this happen, I would demand that a time machine be erected to transport her designers back to the mid 60's. :D

You know, the more I looks at Doris in her voodoo garb on page 6 the more I think maybe Siouxie might have been the best choice for that role.

Brilliant! But ya better thank Dane for the assist if you win the shirt Kitty. So many good cast choices this week though, there may be a couple prize THOIA shirts getting mailed out actually.

Duhhh... I totally missed Dane's comment, in which he beat me to the punch (and also senseless).