Revenge of the Corpse

Here we go with a week of living dead tales! And to make it more fun lets play the “Casting Call” game, shall we? Just tell us in the comments section what famous name or face you’d like to see in the roles of the main characters in this week’s stories. We do it here occasionally anyway from time to time so let’s just make it official.

Actors can be from any era but lets try to keep them all within their own acting career time frame per story, (for example don’t mix Drew Barrymore with John Barrymore.) Also, your cast does not have to look EXACTLY like the characters in the story, just as long as they are type cast properly.

So have fun, be creative, and enter as many times as you want. The best, most unique and inspired casting call of the week will win a THOIA shirt or something. Start casting NOW! 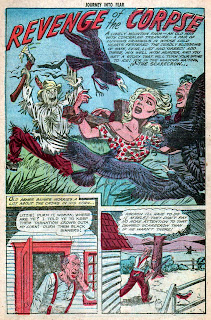 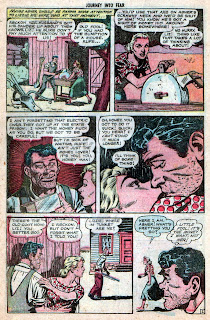 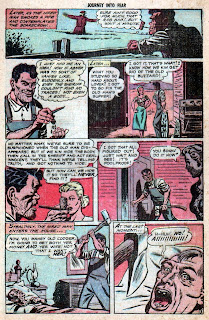 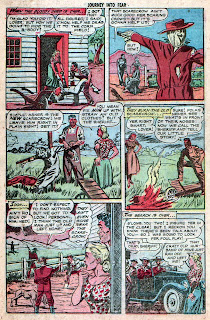 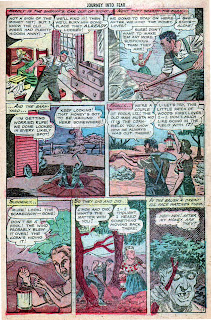 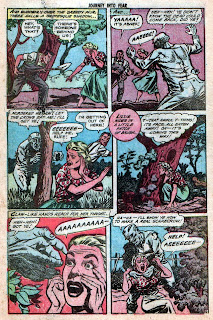 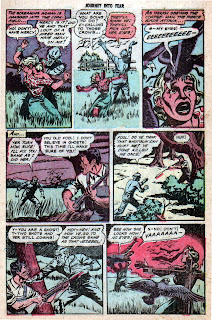 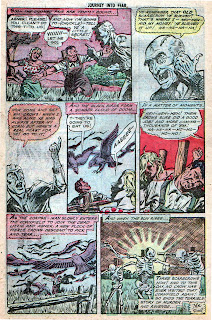 Wouldn't it have been more feasible to put Abner's corpse INSIDE the existent scarecrow?man criminals really must have deficient brains(or comic-writers are really good in letting the readers in on things).my cast: Joan Crawford as Lizzie(see the splash,that is SOOO her),Lon Chaney jr.as Rufe,and Julian Beck as Abner.(for those not in the know,Beck was a distinguished stage actor who played bit roles,but is most famous for his portrayal of Kane in POLTERGEIST 2,the most realistic depiction of a preacher i have EVER seen.).as for actors i want to see in the future,Peter Lorre,Dick Miller(as janitors and gun salesmen as usual)and Barbara Steele...especially her.

Quite the typical pre-code horror tale of revenge from the dead ( with its little flaws ) , yet fun and cool , and with a great splash page !

A couple of my picks may be more obscure to alot of folks these days, but I wanted to suggest a "cast" that may actually have been featured in such a film back in the good old days, so here goes:

I would have paid to see that movie!

In an effort to capitalize on the success of Postman, Jessica Lange stars as Lizzie in this picture, while Jack Nicholson owns the screen as the hunky, brutish farmhand Rufe.

As for Ol' Abner, I will settle for nothing less than Charlton Heston.

My first thought was that I wanted the cast of I Love Lucy to take a stab at lust, murder, and revenge from beyond the grave.

I shore do love a good horror-comedy.

I'm going to go even further "afield" (Ha!) and suggest one performer who has already done a version of Lizzie for that pivotal role:

Of course, he would also be good as the sheriff: "Where's the old scarecrow? How'd it get burned? HOWDITGETBURNT?"

No bears to punch out, though. Oh well.

Love this tale--I feel a little gypped that we didn't get to see the scarecrow brandishing an axe over the crucified lovers like on the splash, but that final panel almost makes up for it. It's like an Easter of Lust and Revenge! The best kind!

And if you're looking for a good "out of context" panel, you couldn't ask for much better than the love scene on pg. 2: "Oh, Honey! You got to do it quick! Quick, you hear! I can't stand it much longer!" IYKWIM!

Great stuff! Can't wait for the rest of the Living Dead week!

One last thing--am I the only one who found the "binding" panel at the top of pg. 7 EXTREMELY HAWT? Yeah, probably so. :)

Wow! I'm blown away by the great responses here already this morning, and all are surprisingly well casted too! I can see it's gonna be tough choosing a winner, especially with a week's worth of shamblin' Z's still to come.

I hope everyone had a great 4th of July holiday weekend, check out the posts from Fri-Sun if you missed them, they're all excellent. I also wanted to take a moment to steer people over to Chuck's Comic Book Catacombs where for the last week or so he's been kind enough to play host to some of the other gems I have in my collection. This is non-horror golden era stuff that doesn't quite fit into the evil scheme of things here at THOIA, but it's all good and funny and of course very well illustrated: See! a Parody of High Noon from Howard Nostrand! See! How to Marry a Billionaire with Al Hartley mocking Dan DeCarlo! See! Super Duck lose a tooth! Use! Lube Cube to quicken your hand... technique.. uh... you'll just have to visit Chuck's place to understand that one fully:
http://comicbookcatacombs.blogspot.com/

Vicar: You are right, sir. It's Certified Hawt.

AHH! GREAT STORY TODAY BUT I SUCK AT THIS CASTING CALL GAME. HOW ABOUT MARILYN MONROE AS LIZZIE, JOHN GARFIELD AS RUFE, AND FOR ABNER HOW ABOUT THAT OLD GUY THATS IN LIKE EVERY 60S TV SHOW EVER, CAN'T THINK OF HIS NAME THOUGH.

The story reminded me a bit of "Dark Night of the Scarecrow".

Cast wise... how about a Rock and Roll All Stars lineup...

The skeletal scarecrows at the end were my favorite part. Very cool!!

Love this one. The crows make it especially twisted.

Burgess Meredith as Abner. He had the range to pull it off.

Maimi Van Doren as Liz. Nobody in the 1950s played trashy and desperate more believably.

James Dean as Rufe. Doesn't look like the comic but looks like someone who could influence Maimi Van Doren.

And of course it would have to be directed by Roger Corman. Made in early 1955 for a summer drive-in release.

So many great comments and cast suggestions today, is this fun or what? I'm very anxious to see what additional surprises are in store for tomorrow's post. And thanks again to everyone who joined in the fun, and tell your friends!

PS: The first batch run of THOIA shirts are in, if you're interested in one drop me a line. All sizes available, and ladies we also have babydoll T's too! $20