I’ll save the space and spare you the Bill Everett bio introduction--- for he needs none! Quite simply (and repeatedly), he’s my favorite comic book artist ever, and that includes ANY comic era he’s worked in. He really had a fantastic grip on the horror genre as you will see over the next 7 days, and there’s tons more of his pre-code stuff backlogged in my archives too, you’ll just have to dig around since I’m too lazy to tag anything. 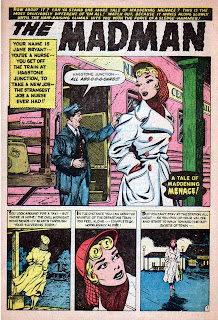 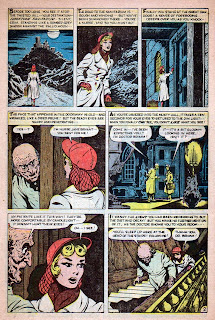 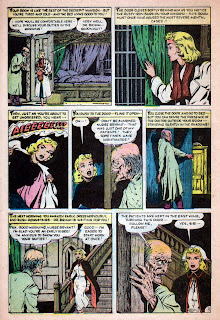 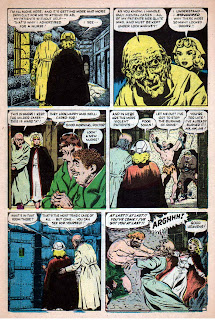 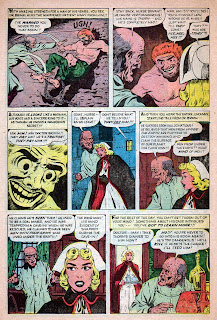 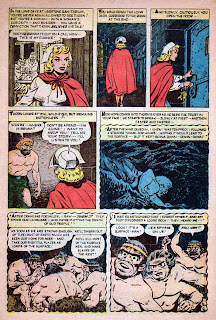 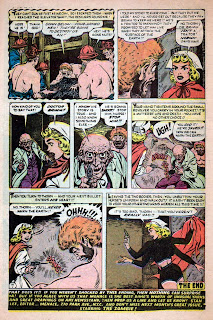 +++++++++++++++++++++++++
QUESTION: If comics were just for kids in the early 50’s then how come many of them contained these bewitching adult ads for women’s negligee? Huh, Wertham? Huh?!! I suppose if you had some spare change left over after sending away for x-ray spex or exploding gum you could order something for your mom… and heck, dad might like the idea so much he may even buy you a few more copies of Menace, or Super Duck. 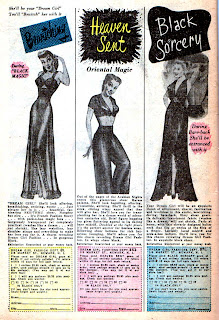 Dang--and I thought I was putting one over on the folks when I got the bikini barbarian babes in Savage Sword of Conan--if there had been lingerie ads in the back of my comics, I'd never have left the house! Well, not that I did much anyway...

Love this story--"I am Nurse Jane Bryant, and I am ROCKIN' the forehead curls!" When the "madman" attacked, I was thinking, "Holy shit! He's got Bluto locked in the dungeon!" I kid--the art was great, and I really loved the doctor's grotesque face. But is it wrong that my favorite panel is the one on pg. 4 with one of the patients screwing with the other one: "I've got to stop them burning Rome!" "Too late, I already burned it! HAW-HAW!" That kills me, for some reason.

And for some reason I find Jane--I mean, "myself"--much hotter with 4 arms than with 2. Maybe it's that Hindu goddess fetish of mine...

I've said too much.

A PERFECT EVERETT STORY! AHHHH, WHAT THE WORLD WOULD BE LIKE IF ONLY WOMEN DID HAVE 4 ARMS!

I agree about Everett. He does an excellent job rendering Dr. Brimm in every panel, emphasizing all his creepy wrinkles and such. It really helps lead us to the mistaken conclusion that Brimm is the villian.

Is Everett trying to convey something naughty by showing the "heroine" get off a pink train in the opening splash?

Forgot to say that I too have always thought it weird they'd put these risque negliee ads in comics. Provocative illustrations aside, even the descriptions could prove "useful" to a strapping young lad in the throes of self discovery. I've worked with less.

It's hilarious how an ad like this can still light a fire in people's britches half a century later... imagine what they thought back in the 50's.

Glad to see today's post is a hit, and coming up there's lots more Bill Everett to go with some really great tales of werewolves, witches, evil old codgers, a great silver age example of Everett inking Don Heck, and maybe even a visit from 'ol Prince Namor too. You know, I'd really wish they'd put him on the tube...

Stick around, it's gona get Everetty.

Superb Everett post, this early style is an excellently balanced mix of realistic and cartoony, the perfect capacity for comic books of the time.
The negligee ad is a nice bonus, gives a whole other meaning to the term "Seduction of the Innocent."

Yeah this a great one,Stan even used the plot again in the Googam era!.not hard to see why.Also glad to hear Everett's your favorite,he's MY biggest influence too,so i know im gonna love this week.

That's fantastic. I always wanted to be a four-armed nurse.

A couple things I had lined up I noticed Pappy has already posted over the last few years, (remember he's been doing this much longer than I've been.) So a quick shuffle of planned posts and I believe I still have enough for a full week of Everetts. Whew!

>>That's fantastic. I always wanted to be a four-armed nurse.

I always wanted to HAVE a four-armed nurse! Hubba-hubba!

I often wish I had 4 arms just to get everything done, but then I realize how weird it would look and I wish for an assistant instead ;-)