A Playmate for Susan 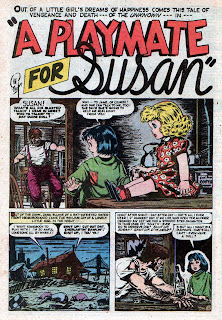 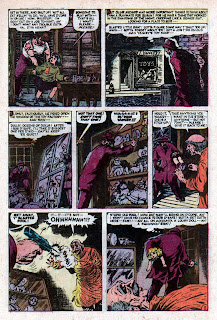 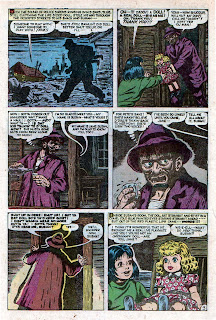 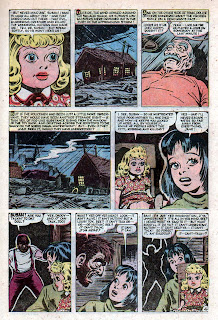 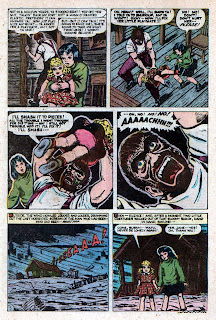 I like this one, and how it does not even say "The End," as if this is only the beginning.

Money quote: "We-e-ell… what do you think, Susan?"

Great story... maybe the best of the 'nineteen that went over'. When Stan Lee went from numerical job numbers to jon numbers with letter prefixes after reaching number 10000, he either made the decision too late or nineteen stories came in after the decision was made made to start again with #A-1. Therefore there are 19 stories, from 10001 to 10019 scattered through the early 1952 issues of all Timely/atlas books. A great crosssection of everything they did as well as an interesting bookkeeping oddity.

Yeah, this was good tale by the late Everett. Variations on this theme pop up from time to time, but they are always effective.

The "mystery" of the doll and what slug saw in his waning moment is a bit frustrating though.

I too was hoping for a killer doll money-shot here, or at least a little more evil from the doll with her sweet painted face. Cuz everyone knows dolls are evil.

The art and writing are done so well here I can't really make fun, so instead I'll tell my own true evil doll story--pull up a chair kids, this one's a little long...

I have a girl cousin who is eleven days younger than I am, so we quite literally grew up together and have always been very close. When we were little and my parents would come over to her parent's place to play cards (yeah, this was the OLD days...) my cousin and I would play in her room, which held all her toys and her large collection of dolls.

She had one porcelain doll that always sat on the windowsill right over her bed, a big antique thing the size of a small toddler. The kind that had weighted glass eyes so that when you laid her back she "went to sleep," and when you sat her up she "awoke." Pale face, red lips, black hair in curls and ribbons, an old-fashioned dress with lace cuffs and collar. It was creepy because it was bigger than all her other dolls, and didn't seem "of" them. Plus those dead glass eyes...

Anyway, one day my cousin had excused herself to the little girls' room, and I was playing in the floor with whatever game we had out. Late afternoon sunlight streamed through the window over her bed, throwing a halo around the doll's contours and leaving the rest in shadow. I continued playing, but something made me look up suddenly...and I swear to God, the thing turned its head! Just a little bit, but perceptibly, as if it had been staring at me and was trying to appear as though it hadn't been. I was an easily spooked kid, so I beat it but good. We spent the rest of the day playing outside. I didn't tell my cousin for fear of being teased.

Epilogue--years later my cousin and I had both become huge horror geeks, and one evening I finally remembered to tell her the story of the Living Doll in her room. Her eyes got big. "Oh my god!" she said. "I haven't thought of that doll in years! Did you know that when I was a kid I always carried that doll around everywhere?"

I didn't remember, and said so. "Your favorite, huh?"

She paused, then plunged in.

"She would get mad."

I don't remember what I said, but "WTF?" is a close approximation.

"She didn't talk or anything, but I could just tell when she was mad, and it scared me. So I played with her and took her places, just to keep her happy. Funny, I don't know whatever happened to that doll...I honestly can't remember getting rid of her..."

Make of it what you will. Absolutely true story.

For those of you who read The Vicar's comment / story above, I'm sad to relay the breaking news that these were the last words he ever typed before police found his strangled corpse slumped over his computer keyboard this morning. Forsensics is still under investigation but they were quoted on the scene as saying the Vicar's throat "showed signs of strangulation by what appears to be tiny, tiny fingers." The extremely frightened, agitated state of his frozen facial expression also shows that he died screaming "like a little girl."

>The "mystery" of the doll and what slug saw in his waning moment is a bit frustrating though.

Chuck, if you look at the 3rd panel on the last page you'll notice that he's looking UNDER the doll's dress as he holds it up... my guess is he saw a penis or something.

Also want to thank Ger for that interesting bit of Atlas / Timely info.

And for anyone interested in cartoons and strips from the 50's and 60's check out his great blog here: http://allthingsger.blogspot.com/

AWESOME STORY, I LOVE KILLER DOLL TALES!!! USE THE IMAGINATION AND IMAGINE SOMETHING EXTRA HORRIFIC HAPPENED, SO HORRIFIC THAT IT COULDNT BE SHOWN!!

Fabulous story and super anecdote by vicar. I, too, would have liked a nice money shot of the doll doing in the father. Even something as simple as a blood splattered shot of the dolls face grinning maniacally.

I think the story leaves us with two take home messages: one, never get involved with a man named Slug (I mean, when you don't even bother to change your name from 'Slug'- what does that say?) And two, don't openly announce to the man who chose to keep the name 'Slug' that you plan to run off.
Just good advice.

I like this one as it is, myself. It's creepier having Slug's fate - and the doll's vengeful powers - remaining a mystery.

My favorite story of the type is F. Marion Crawford's "The Doll's Ghost". Not an evil-doll tale - quite the contrary - but still very unsettling with the elderly protagonist's mounting loneliness and fear.

When it comes to posessed doll stories I NEVER have a neutral opinion,im always either scared silly,or laughing my ass off,but this...here i wasn't scared,but i actually felt sorry for the girl,her dad's even worse than the ones from CREEPSHOW and CURSE OF THE CAT PEOPLE.and as for Vicar's story i'll just say this,ever heard of an old woman in Texas called "Crazy Peg"?your description of the doll sounds a lot like a doll my friends crazy grandma had,it never MOVED,but i always felt somenthing EVIL about it,and so did everyone i lived with and went to school with,the woman would walk the streets with the thing,and EVERYONE would go inside.looking back im sure she had alzheimers,but still...it's possible the doll was sold later on...was it a family heirloom?

Not at all disparaging of the stand-alone parenting skills of Irishmen!

This doll would go on to inspire a whole cottage industry of life-like, silicone dolls.