It Waits in the Box

Erupting from my ancient files haphazardly labeled “What’izzit?!” and “Who’drooit?!” comes this smashing monster classic from the October 1952 issue of Journey into Unknown Worlds #13. For the artist credit the Atlas site says “Stallman?” with a big question mark… anybody know for sure? [They seem to have confirmed it as Stallman. -- Nequam] 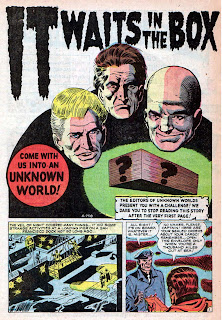 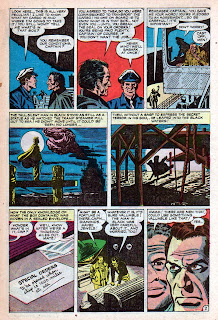 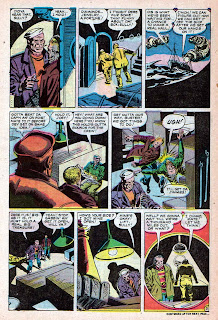 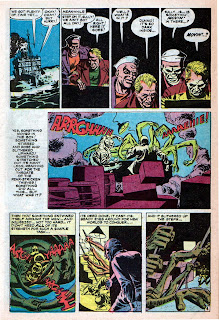 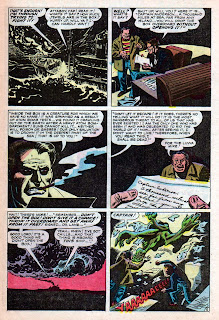 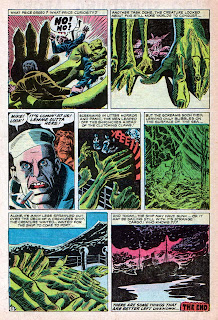 To see a sci-fi Stallman collaboration (this time from Harvey Comics) head back in time to Pappy’s post from yesterday!


CONTEST CLUES!
In case you’ve missed the helpful contest clues I’ve supplied in the last few comments sections of this week's posts here they are in one easy breezy list... plus one last final clue that will probably not help anyone in the least bit. Contest ends tonight at midnight! Let the reckless, no holds barred guessing commence!


2. This film has been re-made over a half dozen times, once for televison even.

4. If you're on “The Horrors of it All” blog then the answer (or one of them) is staring you right in the face.

5. One of the film’s stars later became a famous Hollywood gossip columnist.
Good luck everyone!
Posted by Mr. Karswell at Thursday, May 22, 2008

If you compare the figures to those in pappy's post, you'll see how similar the figures are... so yes, this is obviously by Stallman. I don't know if he inked himself on this story and others. If you google him, you'll get to a late nineties obituary by Mark Evanier, who says that for the start of his career he was often teamed up with John Giunta. He also quotes Gil Kane, who says Stallman didn't come into his own until the sixties - and I totally disagree. His work for Timely/atlas (and Harvey) is strong and solid. He could draw weird stuff with great believability (as in this story) and his sometimes work with Eisner shows in his storytelling abillities. His style changed over the years, which makes me wonder if he had different inkers or changed his inking style himself. Strangely, I think it is the latter.

With all of those appendages I guess you could say that creature was born of the nuclear "arms" race! (Ouch!)

I added a link to this posting on my own posting from yesterday.

I tried to stop reading after the very first page, and I JUST COULDN'T DO IT! You win Journeys into the Unknown!

I love the thick, thuggish looks of the sailors on pg. 2, almost as much as I love the patois--"We got t'ings ta do! I'll get da jimmies!" LOVE IT.

I do admit to smirking at the top of page 5, imagining other responses to the captain's speech bubble there:

WHAT A WEIRD AND SPOOKY MONSTER, I'M ALWAYS A SUCKER FOR THOSE OMINOUS DOOM ENDINGS TOO.

I suspect that Karswell has been snickering a little too much over the movie conundrum that he's left us all in.

I was determined to ferret out the mystery of the thing, but my brain melted down this morning after I entered another blind alley and found myself stressing out over another futile search clue.

The creature in todays tale is a real "handful"! Creepy.

>compare the figures this is obviously by Stallman.

Though we have seen many examples of excellent style aping and flawless swipes, I trust your opinion Ger... thanks!

>found myself stressing out over another futile search clue.

Well Chuck, I do apologize... my intention for the contest was aimed more at having fun and not causing someone to have a mental collapse! But with the added clue this morning I now suddenly have two correct answers so somebody is apparently going to win this conundrum after all.

>I tried to stop reading after the very first page, and I JUST COULDN'T DO IT!

Vicar, face it--- you're ADDICTED!

I love that creepy ending!.it still could be out there...as for the art,it's Stallman all right;you can tell by the thugs faces.the Vicars comments cracked me up and killed the mood for me though(kinda gross too considering that i envisioned Anthony Dawson and Ernest Borgnine as Anderson and the mate).will he have to have an intervention?

Great read. I love the monster, even despite his strangely varying size.

I was in the same sort of mindset as the Vicar, except what caught my attention was page 5's "For the love of Mike" followed by page 6 where we actually meet the first mate's apparent boyfriend 'Mike' ("Mike, look!").

Well, I guess that's why they call them 'first mates'...
(ughh, that was bad even for me.)

Let's see -- impervious to bullets, poison, gasses, and atomic blasts, but can be rendered immobile by placing in a wooden crate.

But once we get this near-immortal threat to mankind in the box, we're going to entrust its destruction to a suicidally depressed man and greedy merchant sailors, and hope for the best.

Still that was a pretty good monster. And the end is a nice twist on the ghost ship idea.

>>but can be rendered immobile by placing in a wooden crate.

But once it's out, it can rip through the steel bulkhead into the captain's quarters! Maybe all those arms and elbows need space to generate leverage...

Many illogical details and foggy plot points but still tons of fun, I really like the Atlas horror stories best.
I'm new to this blog but for the last few days I've been reading and very much enjoying your Bill Everett posts from earlier in the month. Thank you for sharing.

But once it's out, it can rip through the steel bulkhead into the captain's quarters!

Heh. You made me think of the opening-the-ark scene from Raiders. Except instead of Hebrew, they spoke in Joisey accents.

is the still from the cat & the canary? Been awhile since I saw it.

This is definitely Manny Stallman. He collaborated with John Giunta as inker on many stories, but I think this is an example where Stallman inked himself. You can see many more Stallman stories at my CAF gallery here: CAF: Manny Stallman