Bill Everett Tribute: Day Two rolls on with another horrific Atlas weirdie… appropriately titled too, because when you get to the last page and see the head on this monster you might just black-out from laughing so hard. Too cool.

(Also, make sure you head over to Pappy's today for TWO more great Everett tales! Click HERE!)
From the July 1952 issue of Spellbound #5 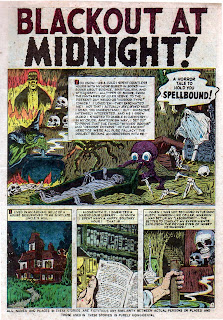 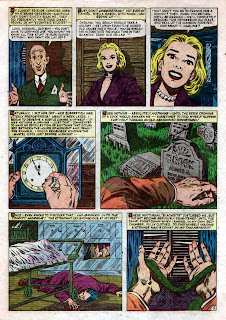 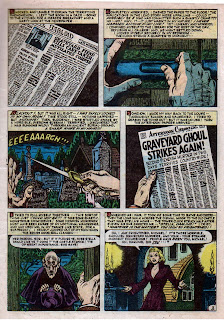 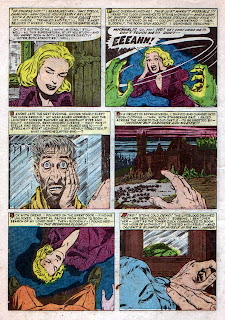 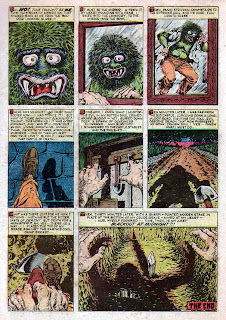 Yesterday we looked at a sexy negligee ad scanned from a 50’s comic; now let’s jump forward 20 years to 1973 with a fondly remembered t-shirt ad that was featured in nearly every comic book on the shelf at the time. I’ll say the superhero and hot rod images were much more appropriate in a comic ad than say, silky sheer sex panties, but the inclusion of Bud Man and Panama Red (takin’ a toke on the smoke bloke) might be pushin’ it. Does anyone know what ever become of Roach Studios in Ohio? 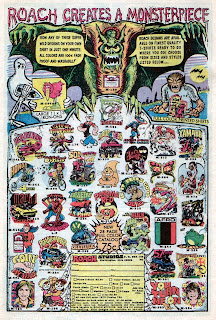 The part of me that loves the Rocky Horror Picture Show wanted to make cheap gay sex jokes all through the second page.

I'm not an Everett expert, but this story just didn't have Bill's art vibe for me.

I thought that the tale was fun and I enjoyed it, but I'm just saying.

I'm probably just too enamored of his 1950's Sub-Mariner stuff.

Ha, what a face, a future avatar for sure

I need to make one of those t-shirts to wear for Stella--"YOU TURN ME ON!"

I really loved the first-person pov of the art in this--reminded me of the experiment in the Robert Montgomery film noir The Lady in the Lake, only I think it worked much better here. Loved the (typically misspelled) newspaper headlines, and even the wild eraser-topper look of the monster.

And is it just me, or do "I" look like a haggard Vincent Price in the mirror before "I" change into one of the Fry Gang?

And Stella's stylish collar on that red gown gives me a funny feeling...like a blackout's coming on...

I THINK THESE EVERETT POSTS ARE SOME OF THE BEST STORIES YOU'VE EVER GIVEN US. MY MIND CONTINUES TO BE BLOWN EVERY MORNING!!

Great story. The POV shots actually reminded me of any number of video games. This would have made a great horror version of Myst.

I'd have to dump Stella, though. Any lady, even one who lives in a castle, who tells me "...we'll completely remodel this depressing old place, and seal up the dungeon forever" is clearly on a very different page than I am.

"When Muppets Go Bad". No, that is not a face one would want to find in one's mirror...

Well,i'll admit the monster looks more like a rejected design for Cookie monster(first one to type in Om,nom,nom dies.)than a ferocious ghoul,but the artwork and dialogue more than make up for it,a true triumph of execution over the material.Stan always seemed to write his most prose-heavy(though this could be because Everett occasionally co-plotted things and did his own lettering) and intelligent scripts for his best artists,it's obvious he considered Everett one of those.

I think this one was taken from H.P. Lovecraft's 'The Outsider'. With some alterations of course. Personally, I love that monster. It's so stupid that it's awesome.

Okay, so with today's post we have a stupid, Mysty, cookie monster muppet, furry freak brother, mind blowing, eraser toppin' fry gang, avatarish, unenamored, Rocky Horror sex joke of a creature. Sounds like we have a whole slew of "no prize" winners this week!

Congrats to all who commented!