Performing a quick IMDb search for “Mother’s Day” unearthed over two dozen different film entries all bearing this title, many of them are comedic film shorts... of course the most famous “Mother’s Day” of them all is the disturbing, exploitive, slasher classic from 1980. 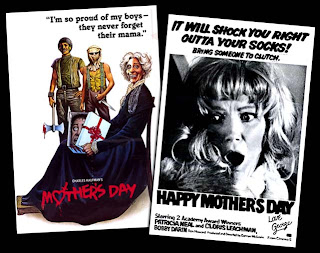 But just as I was wrapping up my research on this “holiday”, I noticed a film entry called Happy Mother’s Day, Love George (‘73.) Apparently, Darren “Kolchak” McGavin directed two feature films in his career and this was the first. Also known as Run, Stranger Run, this PG rated “psycho-murder” flick has a wild all-star line-up, check it: Patricia Neal, Cloris Leachman, Bobby Darin, Simon Oakland, Gale Garnett, and Ron Howard! Synopsis: A series of gruesome murders shakes a small New England fishing village as an adopted teen searches for his biological parents.

Has anyone ever even heard of this film or have a copy I could borrow? Man, just when I thought I’d seen them all…
Posted by Mr. Karswell at Sunday, May 11, 2008

hi!!!! have just bought in newspaper kiosk " the house of seven corpes" be a really strange film, I have not seen him/it yet, but I believe that within today I will know about thing speaks! let's feel soon there! hi friend

I'VE NEVER HEARD OF IT EITHER BUT IT SOUNDS GOOD AND THAT CAST IS INDEED INTERESTING.

MOTHERS DAY '80 I HAVEN'T SEEN IN YEARS BUT I REMEMBER IT BEING NICE AND SICK.

Peter from the UK writes in saying that Happy Mother's Day, Love George can be bought at:
http://www.superhappyfun.com/content.cfm

Thanks! And Happy Mothers Day, you muthas!

I wonder why I've never seen this blog before! I really like it! Happy Mothers Day, Love George sounds fun and bizarre...does anyone remember that movie Die! Die! My Darling, I think it was an old Hammer film, does that count as something for mother's day too?

>does anyone remember that movie Die! Die! My Darling

Excellent film! And one I know that Karswell likes too as he has posted about it several times in the past when it has aired on TCM

>And one I know that Karswell likes too

Indeed I do! I suppose any movie with a bizarre "mother fixation" would qualify as good Mummy's Day viewing (ie: Psycho, etc...)

And welcome aboard the horror train, T. R Xands...