I had originally planned a TRIPLE wicked witch feature for Walpurgis Night, unfortunately I ran out of time, plus the third story scans (witch were kindly donated by Will-- thanks man!) required a wee bit of clean-up. So yeah, apologies, but I basically just ran out of time. So here's the third sinister story finally, somewhat slightly fixer-upper'd, from the January 1954 issue of Weird Mysteries #8. GCD notes that this one was reprinted / remade more than a half dozen times in the 70's by Eerie Pubs, K. G. Murray, Gredown, and even Stanley Morse himself. Looks like pretty much everything in the original precode issue was reprinted numerous times as well, including the gory shock classic, I Killed Mary! (witch we reprinted in Haunted Horror #22.) Witch. Witch. Witches. 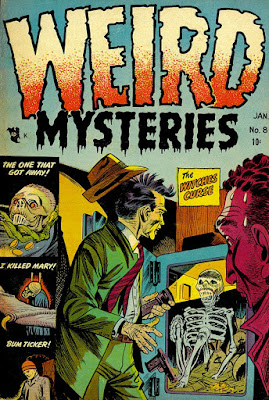 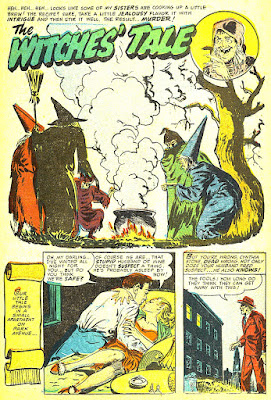 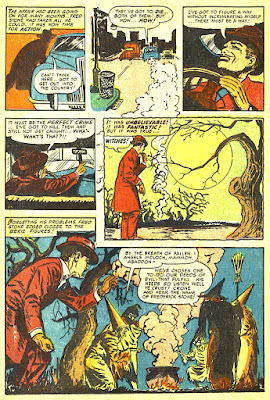 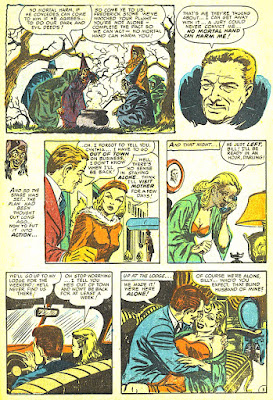 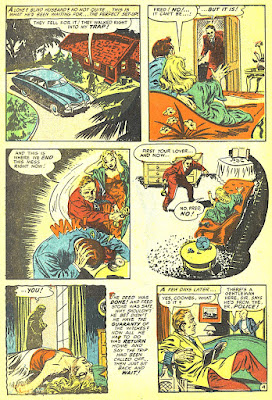 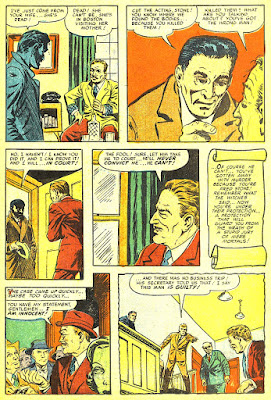 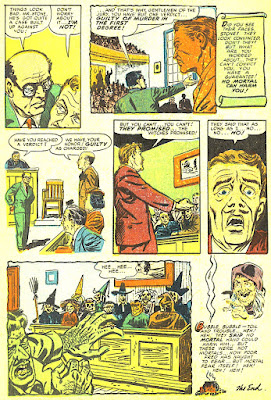 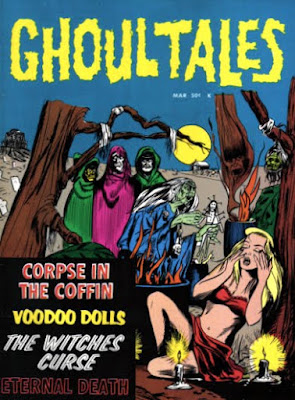 Oh what an awesome ending. I outright laughed at that. The skeleton with the scraggly hair! The puritan (what?) The witches of all sorts. Incredible. I loved it. BTW, did everybody else in the court room see them warp in (notice the jury is normal in the other shots) or was the jury always this collection of creeps with a masking spell?

Honestly, I really enjoyed this ending!

Now I don't know who came first (I'd assume Atlas) but they lifted Atlas' cover style (I love Atlas but that was always one of my least favorite bits) and Weird Mysteries had their own prettier version of the Old Witch, even with the same general color scheme.

Also liked the off panel murder of the wife, it leads a bit more suspense to it.

This one has enchanted me.

Ghoul Tales are the best tales!

You have to either be really desperate or really stupid to decide that it's now okay to murder your cheating wife and her lover because you heard a bunch of witches in the woods say that you'd be able to get away with it--in Shakespearean rhyme even!
That ending is pretty fun, although it kind of makes you wonder what the witches' motives were for in the first place. Apparently just an excuse to get Stone's soul apparently.
I also wonder if the court could see the actual jury for what it really was or if they simply thought that Stone had gone raving mad at the end when he claimed that the witches had promised that he'd get away with his murder.

Nowadays Stone wouldn't need to drive into the woods to find witches, he could look up his local coven on Facebook, Twitter or Craigslist. Modern technology makes things so much easier today.

I didn't see the ending coming, I thought Stone would be punished with him in his car going off a cliff or driving into a tree (a machine, not a human being, doing him in.)

I have to agree our little story of fatal adultery was a colorful tale well told, but you don't trust witches. It just goes without saying.( What an oxymoron.) Did that one juror have his brain sticking out like your recent post of just desserts. Thank you Mr. K.

Great story! (Thanks for the scans, Will!) I love the panel of color-coded witches at the top of page three. They're like a coven of magical sixties HYDRA henchmen or Super Sentai witches or something.