Another one from the April 1954 issue of The Thing #13, (see Poor Fish! in our previous post) and as it seems that some of you out there are actually still alive and have not yet died laughing --and I've been trying so hard this year!-- I feel it's time to give you all a great big hand. We reprinted this one way back in 2013 in Haunted Horror #6 as well, (which featured Mr. Karswell's first ever HH cover appearance!) so it might be frighteningly familiar to some. This also fulfills a couple of requests for some early Steve Ditko, in both story and cover art. Happy? Now get dyin' already! 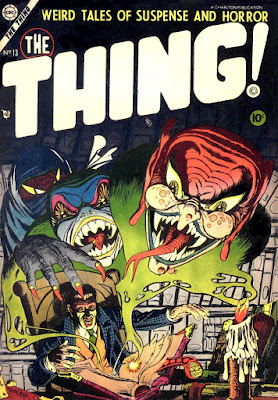 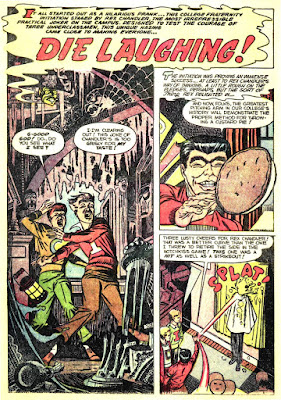 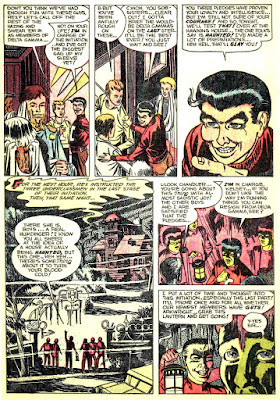 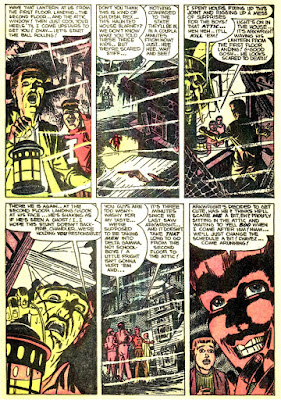 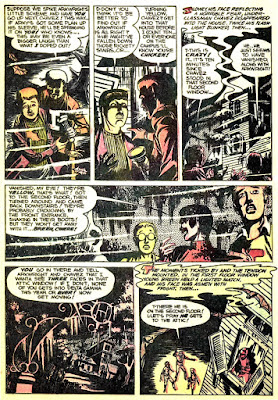 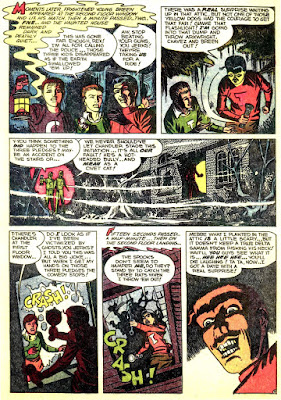 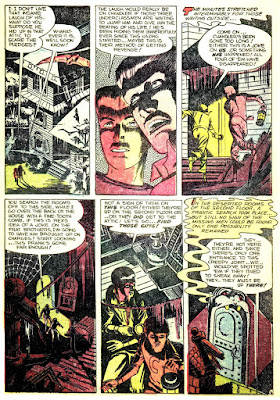 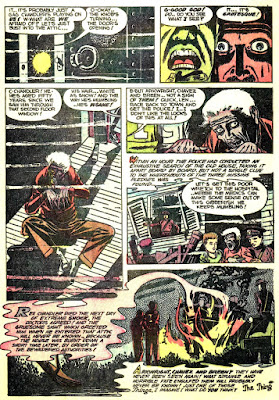 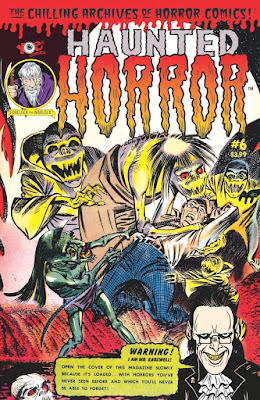 Die Laughing is similar to the story "The Curse" found in Alvin Schwartz's 'More Scary Stories To Tell In The Dark' (the trio of scary stories books by Alvin Schwartz are a great read for young and old, even if they changed the art for the worse in later editions.) The origin of 'Die Laughing' and 'The Curse' are a retelling of a legend titled "The Fatal Fraternity Initiation"

This was a great little story during the golden age of Charlton horror. Thanks for the post.

Thank you Mr. K. for a great work from hall of famer Ditko. Bottom of page six last panel, that door made me think Aldous Huxley. What door of perception are these pledges going to pass through? Well, we never do learn. This reminded me of "Picnic at Hanging Rock". Today's post was an enjoyable perfectly illogical offering even without a conclusive conclusion.

Sometimes, it's more terrifying when what occurs in a horror tale is never shown or described as opposed to showing it in all of its gory, glory. We never do see what goes on inside that haunted house or what sort of pranks Rex set up in there. We only know of the aftermath as each pledge looks absolutely terrified when they reach the 2nd floor of the house. We also never find out what became of the missing pledges or their fate--we only see Rex who takes the secret of what frightened him so badly to his grave. I'm surprised that nothing actually happens to the last two college boys as everyone else doesn't return after reaching the attic.

"Mean as a civet cat." Now there's a term you don't hear too often.

Was also an EC story.

This is my favorite period for Ditko's art, I think. For me, he was never a perfect fit for the straight super hero stuff of the early Silver Age--though much of his output then was also wonderful. But this period of his career, man, what anxiety driven fever dreams that guy got onto the page. How experimental and surreal. Does everything work perfectly? No. But I'd rather read Ditko's trial-and-error stuff than about anybody else's slick, by-the-numbers output. Look at those hand-drawn halftone dots. That's just so weird. But it really kinda works, too: Pages four and five--each with a big, dotty horizontal smack in the middle--are both superb, especially when viewed full page.

I really like these precode stories that are based on urban legends. I don't mind at all that Ditko left the mechanism vague (the very definition of a McGuffin); and well, if his then leaving the ending equally unsatisfying is maybe going a little too far, it certainly didn't bother me any. In some stories, all this mysterious anti-resolution might strike me as lazy, but not here for some reason. And maybe, again, it's those weird dots. Nobody putting in that much labor is being lazy, so there must be some method to the madness of this plot as well.

As pointed out, this is a old urban legend, I remember hearing various versions of it at summer camp, etc. It's paced very well, my only minor complaint is the unnecessary monster door, page 6, last panel. Just leaving it at a spooky house would have been fine. Well done story, a enjoyable read.

The inking is clouding up Ditko's art here, but his art is always so strong that it can take it and the heavy shading works well with the story. I also don't mind the coloring. Ditko does some great camera angles in this one.

The fake haunted house that becomes a real one is definitely a tradition. A story in House of Mystery # 190 uses the idea especially well.

It's understandable that they gave Rex Chandler that appearance, but it really clashes with the name. When it comes to colleges, the name "Rex Chandler" goes with a "pretty boy" Ivy Leaguer type character.