But today’s ghostly terror tale comes from the Dec. ‘52 issue of Diary of Horror #1, and features a truly nifty bit of cover art. It's a fun issue, I'll be posting another tale from it later this month. 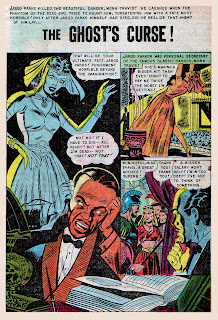 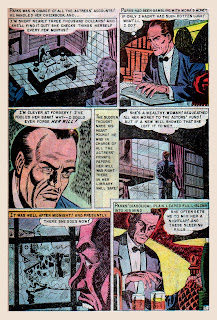 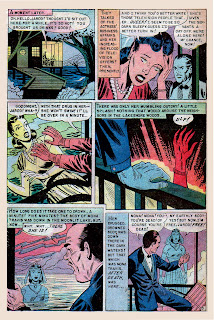 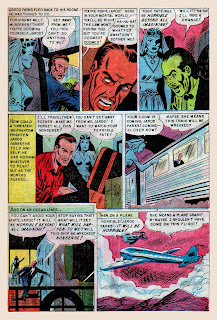 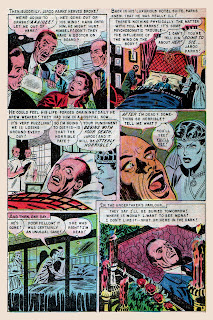 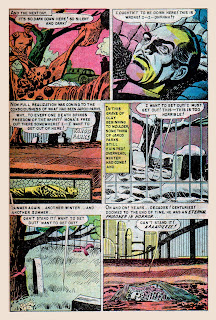 
And just in case you’re wondering about those scantily clad, buxom young lasses on A. C. Hollingsworth’s classic bondage cover, I’ve also included the text story that tells what happened! 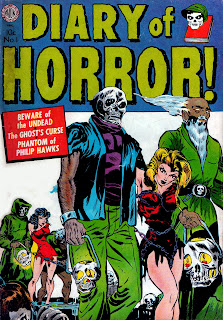 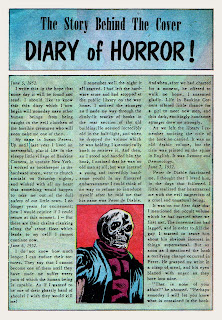 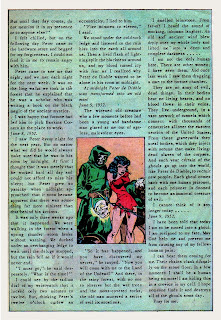 "...an Eternal Prisoner in Horror!"

aren't we all, hasn't the ghost of our eventual fate been pointing her finger at us our whole lives? isn't that why we read this stuff?

what's that all about?

The prose story was also funny. If you date a stranger called de Diable, you geht what you deserve. At least she must have had some really good qualities if he dated her for a WHOLE year before he "recruited" her.

CHILLING FINAL PANEL, LITERALLY! AND YES THE JERK TOTALLY DESERVED IT. THAT IS A REALLY COOL HOLLINGSWORTH COVER TOO, LOVE THOSE SKULL LANTERNS!

I just wish the ghost of my eventual fate was some scantily clad classy dame! Maybe if he asked, she would have told him of his fate through interpretive dance.

And what a revelation that last panel is! In the future, man will live in phallic symbols. No wonder he went crazy!

Send me a kiss by wire
Baby, my heart's on fire

If you refuse me
Honey, you'll lose me
Then you'll be left alone

See, because that bleak, melancholy ending really reminded me of the Warner Brothers cartoon with the frog. I think future me would take the unearthed singing corpse on the road, the big show tour--we'd make millions, you hear?

I would love to see more from these Avon one shots, real good stuff.

What a terrific story. I was first struck by Jarod's decision to remain indifferent to the ghost before her constant presence began to wear on him, and also by that ending -- really different, low-key and stark. Of all the possible Hells, wouldn't that one be just perfect?

As to that additional treat, what a find! A text story that relates to the cover! I'll bet there aren't many of those.

I wasn't really aware of these Avon one-shots. If you have access to any others, I'd love to see them.

Thanks again, Karswell, for excellence that keeps on comin'.

This one has a lot of unexplained happenings--for instance, why does the dancer come back in her stage outfit, which she WASN'T wearing when she died? Why does Jarod not seem at ALL bothered by seeing the ghost of the woman he just killed moments before? Why does he just *think* "AAAIIIEE!" on page 5, but everyone still reacts (telepathic blast!)? And why does Jarod merit this fate "horrible beyond all imagining"? I mean, he's a jerk, but people kill people all the time. How come he gets coffin-eternity, and someone else gets boiling cauldrons, and someone else gets endless death repetitions? What is the standard for justice here?

I liked Mr. Cavin's Looney Tunes ref., but for me the last panel brought back the end of the North-going Zax/South-going Zax story from Dr. Seuss! Except if the Zax were dead, and trapped in their mouldering corpses. Which they probably are, by now. :)

I think Jarod probably earned this particular Hell because he must have been a claustrophobe. I know it would work for me.

That cemetery certainly did not have a very good groundskeeping department.

A nice batch of laugh out loud comments today, you guys 'n ghouls are too funny. And to answer one question, I have actually posted a story from an Avon one-shot before, it's called The Thing in the Mirror and is from Phantom Witch Doctor #1, you can see it here:

Also, check the THOIA archive on January 1st for a non-Avon one-shot spectacular called The Dead Who Walk. I kicked off 2008 with the full issue broken down over 3 days. Awesome stuff.

TOMORROW: A gorgeous ghostly gal, and maybe an impaling or two... it's wild weirdness from the Web of Mystery!

Ugh. What a grisly fate. That's my worst nightmare.