The Amulet of Terror

Welcome to THOIA’s Stink of Death Weekend. Why’s it stink, you ponder? Well, because today and tomorrow you shall bare witness to two of the most foul smelling creatures in pre-code comic history. Don’t believe me? Read on then brave soul, and just try not to hold your nose! 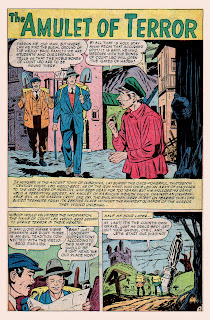 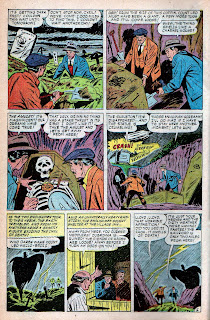 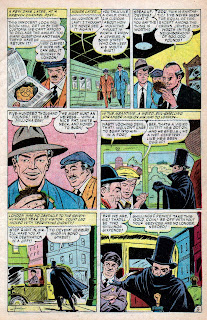 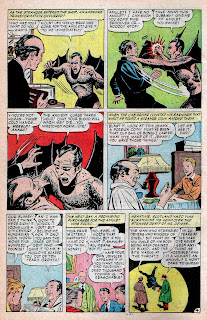 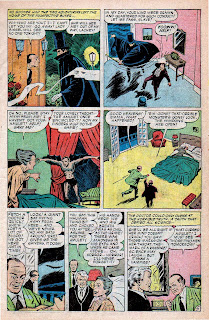 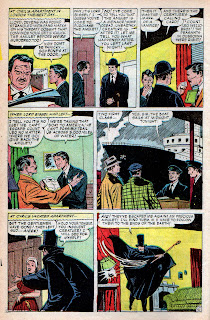 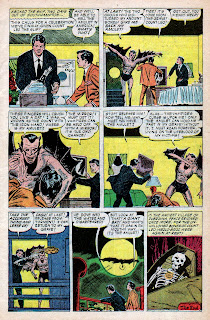 
THOIA CONTEST WINNER RESULTS!
Direct from the faux mouth of guest Judge Dr. Phibes, here are the results of our “Haunt from the Sea” contest:

Phibes says: I would first like to point out that my judging reasons are too complex for you mere mortals to comprehend, but I will try:


First place goes to Absinthe of Gloomy Sunday. She used the term "unholy grotto". Bravo! I like the open ending too. Plus it had a woman's touch, which makes me think of my poor Victoria......


And the Second place Runner Up prize goes to Michael Price. I liked the visual presentation, including the comic book font. He mentioned the creature was trying to re-conquer the human race, so you know there is some great back story here. Plus, Michael's last name is Price. Price is a special name to Dr. Phibes.


I also have to give special mention to Mr. Cavin. This guy put a lot of work into his submission and did have the most complicated story. Now if Karswell is done making demands on my time, I can get back to the building of my Death Ray Machine. I shall see all of you who have crossed me soon! –Dr. Phibes
The Doc has spoken! Winner’s please email me your shirt sizes and mailing address and I’ll get your prizes to you pronto. Thanks again to everyone who played. I personally would like to give an extra special mention to these fabulous contributors as well: Silvano, Tim Tylor, Fred, The Fortress Keeper, Todd Franklin, Roger Howell, Jonathan Crimmins, John Kaminski, Jamie Wilson, Tony, Philip Fox, and Sharox.


And now, the winning submission / conclusion from Absinthe:


The pale, lifeless body floated to the depths like a petal torn from a white rose. The ugly sea creature, ancient yet wise rose to gather his choosen one to his breast. Down, down, down he dragged his goddess to his unholy grotto far beneath the waves. Past darkened corridors and strange chambers he swam, past strange hieroglyphics on the wall and pools of noxious light thrown by trapped luminous fish to the altar. He had lived alone all these eons waiting for the right one to come and be his bride, guarding the body of his past mate - the vessel of her soul. There amongst glowing corral, ensconced in foul gelatine lay the lifeless body of another sea creature, his soul mate, his beloved. He lay the dead human on top of her and began his preparations. Strange concoctions were scattered upon her and invocations chanted in a guttural watery voice. For many days he continued the ancient rites until finally he was finished and collapsed from exhaustion and lack of food. When finally he came to again he looked into the eyes of the girl, but they were different, more primal, more passionate - a mirror to the soul, the soul of his beloved now housed in a new modern body. He turned her head gently from side to side and saw the gills were easily camouflaged under the long red locks. Now all that remained was for him to find a new body for himself . . .


And Michael Price's rad runner up submission too: 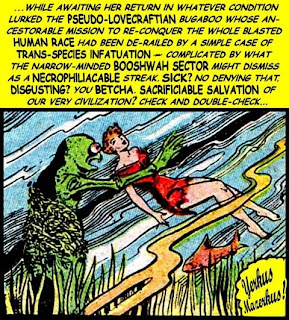 Email ThisBlogThis!Share to TwitterShare to FacebookShare to Pinterest
Labels: Ace, artifacts of doom, graverobbing, Mike Sekowsky, The Beyond, vampires

So many innocents die,but the two perpetrators dont?.weird.still,Count Leo is a great monster and the art was nice.was this inspired by Lovecraft's THE HOUND?.

Can't resist MSTing this one a bit. The Count needs some coaching on style - dress sense alternating between "Dracula attending the opera" and "Namor the Sub-Mariner at Halloween". And those tomb-robbers are a right pair of geniuses - "Five hundred thousand pounds! We'll be millionaires!" And running around with great big spades asking "Which way to the cemetry?" Very discreet.

"Gor' blimey dad... It looks like a 12th century Hungarian coin worth some five hundred pounds!"

(Okay, Mr. Taylor! I was writing my comment when you posted yours. At the point in the story where the characters actually celebrate their millionaire status, it is to the tune of five hundred thousand pounds. This would really have been enough, converted into US dollars, to make two Americans into millionaires back at the turn of the century--but certainly not as late as the fifties. I was going to forgive this lunacy anyway, right up until I re-read the intro an realized the folks were also supposed to be Englishmen. There is no conversion theory that I know of that makes five hundred thousand pounds equal in excess of one million pounds. One can only postulate that the team of grave robbers must have a Matter Doubling Machine somewhere.)

I liked the monster a lot, too. But unlike Mr. Pariah, I found the lack of overt moralizing in this one to be refreshing. Innocents die, the accidental culprits go unpunished (except for defaulting on their venture investment, I imagine, and losing their credit line), and the monster only wants to go back to a state of peaceful dormancy. It's nice.

I loved the jeweler - when confronted by a giant bat creature with horns and fangs wearing only a black speedo it is customary to still try and make a sale! And then his later exclamation, "Your now human!" - no really, what the hell gave that away!

I think the best line is " I have no amulet but I can show you some fine brooches" but ALL the story is pre-code fun ...
Thanks for sharing

My absolute favorite is right at the begining. "Hey, ho, peasant, we are here from abroad to dig out one of your graves. Which direction?" Don´t try this at home, kids, the natives could get grumpy *g And this was definetly HPLs The Hound

The juweler was also fun. But when did the vampire leave is calling card? Before or after beating the butler?

Still, the straightforwardness of the tale was indeed refreshing. Everybody was happy at the end - well, except the juweler :-)

Great story and most of the fun stuff has been mentioned except for the monster leaving a calling card, loved that bit. I agree with andydecker, this is definitely a version of HPL's The Hound, although toned down.

Yeah, yeah, funny coin conversion flubbery... so no one else thought it worth mentioning how many goddamn times someone had to point out how goddamn stinkin' awful this vampire stunk?! You're all ignoring my Weekend Theme!!! *sighs*

Okay, Dr. Phibes has come through with his contest winner picks and they will be posted here shortly. Thanks again to all that played.

I have another stinky goon tale tomorrow, but you'll all probably just point out his silly hat or something instead.

You wouldn't be dissing Vlad Namor's sweet stovepipe stink-hat would you? That was a bad-ass hat, my friend.

Congratulations winners! I really enjoyed reading both of these endings a lot. I love how Absinthe's victim's hair continued to grow after death (creeepy), and I like all the hipster malapropisms of Mr. Price's one-panel show.

with all the references to stink in this story, one could imagine that the publishers planned it to be a Scratch'n'Sniff comic! "Kids! Whenever you see The Count, just Scratch his Hat!"

GREAT STORY, STARTED OFF WITH A REAL NICE HAMMER FEEL. VISUALLY I THOUGHT THE VAMPIRE HAD A WEIRD GARGOYLE VIBE, WAY COOL.

THAT IS GOOD NEWS ABOUT THE EERIE COLLECTION TOO. I WAS WONDERING IF DARK HORSE WOULD DO THAT AFTER RELEASING THE CREEPY ARCHIVE. AND CONGRATULATIONS TO THE CONTEST WINNERS, VERY NICE WORK ABSINTH AND MIKE!!!!!

Good choice on the winning entry - now someone needs to draw it! This was fun and thanks for having it. Tell the good Dr. the best of luck with his death ray!