The Monster They Couldn’t Kill

So how do we possibly follow up a great Matt Fox story like the one from yesterday? Howz’about with a tale by the late, great Jack Cole! This weird sci-fi horror yarn is like some crazy version of The Amazing Colossal Man (1957) but dressed in a cheap ass costume from Killers from Space (1954.) And while it’s still a fun, rip-roaring’ Monsterama, it kind of seems like Cole maybe should’ve known better about that “monster” design. Ah, well... 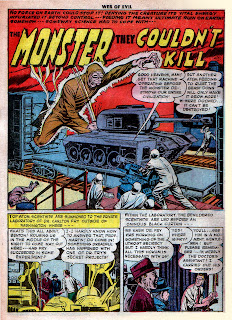 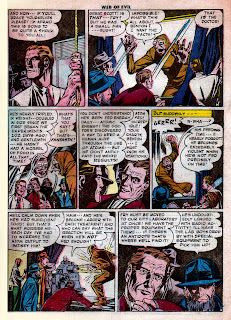 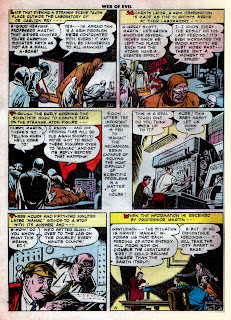 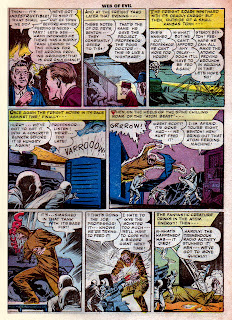 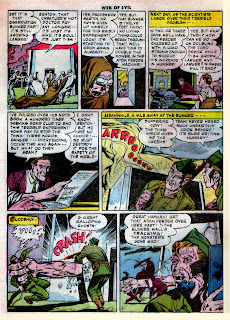 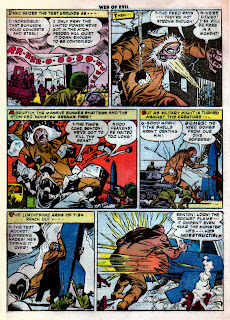 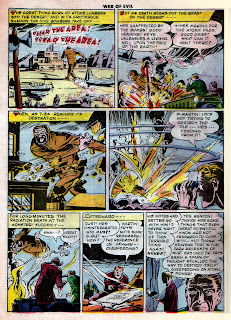 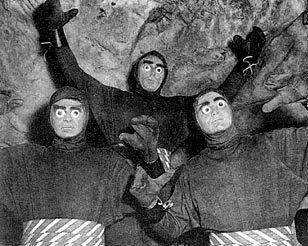 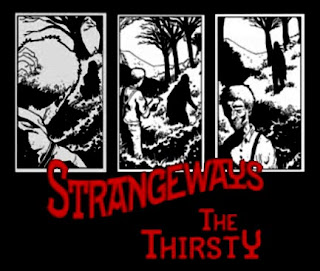 Matt Maxwell, creator of the wild werewolf western fantasy Murder Moon is back with the latest entry in his great Strangeways series. Strangeways: The Thirsty pits gunfighter against bloodsucker, revolver against nightwalker! And when a vampire gets thirsty enough, they find a way to hunt, even in the daylight! Both original art teams from Murder Moon return, but not exactly in the way you'd expect!


The printed edition should be available early summer of 2009, while an online serialization should start before fall. But for now, click HERE for the new trailer and sample pages!
Posted by Mr. Karswell at Friday, September 12, 2008

We dodged a bullet there. Having the earth destroyed by that monster would have been... embarrassing. Curious his clothes and specs grew with him.

that monster design looks like an almost straight lift off the martians in the 1953 version of Invaders From Mars, except for the slackjaw expression. it seems to me also that Bill Rebane might have borrowed the central plot of this story for his "film" Monster a-Go Go! i love lifting!

Those terrible radio activity. Hearing all those channels must have driven him mad.

As far as cheesy dialogue goes, this is really a winner. On the other hand, you can really imagine this deep, no nonsense voice from the off telling us: THERE ARE SOME THINGS EVEN GREAT SCIENTIFIC MINDS ARE NOT PREPARED TO COPE WITH --- YET!!! Goosebumping ensures.

Hey, well spotted. I knew there was something familiar about that lame leviathan but I couldn't place it. (Thanks to Monsterland Toys for the poster pic.)

Even if the creature in the second panel of page two looks a bit like Mickey mouse's Goofy , this is very cool ; something in the page design and figure posing strangely reminds me of Kirby ...

That has to be the best silly dialogue ever!! Favorite line - "Great Hannah!" It doesn't even make sense!

And I also enjoyed the fact that the creatures clothes grew with him. Just so we wouldn't have to draw a naked monster.

"H-he's making for the atomic piles! Good grief! What can it want there?"

Sometimes I'm surprised by the end of these things simply because I've been commanded to be.

It's just like a blackmailer or terrorist. If you give in to their demands, you just make the problem worse. Give a mouse a cookie and he'll want a glass of milk.

But then, who wouldn't?

Some overbite there, Mr. Giant MoleMan.

I was thinking T-34 looked like the aliense from Killers from Space with Peter Graves--but obviously the ball-eyed alien has a long cinematic and artistic history. :)

Yes, thank heavens the last human part of the doctor's brain had the sense to destroy himself with radiation poisoning!...and the researchers not wearing protective suits...and half the state of Arizona...

This was a fun one with lots of cool art. I particularly like the cameo by the Phantom Stranger at the bottom of pg. 2--that fake beard isn't fooling anyone! Also fun, the mechanical brain named "MANIAC"! There's a whole other story waiting to be told there. And after that, the tale of the harmless serving automaton named "KILL MACHINE"!

Soldiers whacking the giant arm with their rifle butts rather than shooting, proof that even when using MANIAC the conscientious calculator tech needs an old school visor...it's wall-to-wall goodness, this.

And I'm with Absinthe on the great exclamations here--in addition to that poor cow, we also get "Suffering Hades!" and "Great Galloping Ghosts!" By the time they get round to "Good Grief," I guess they were out of ideas.

HOLY KUMQUATS OF KALI, Karswell, how do you do it? ;P

Page 6, panel 2, I love this panel. The artwork is perfect. I too detect a Kirby influence. Weird.

MANIAC was a real computer, at least according to Wikipedia - there were three of them, even. Great ancestral computers whose descendants are staring into our faces this very moment... >:D

I liked the part where the super computer managed to come up with a solution in a mere 3 hours and fifty-two minutes... And the monster... sort of a mix between a giant human and a giant woodchuck... gotta love those teeth!!

T-34 looks like a giant teething baby in a onesie.

That's all, just wanted to throw that out there.

Nice throw Dania... and suffering evil, I have another tale from this same issue for you tomorrow too. And don't miss Sunday for another Jay Disbrow Wolftacular!

I'm serious peeps, THOIA is always open, all day everyday, weekends and holidays--- you snooze you lose! Have a good one.