Here’s a really great, mean spirited, supernatural weird war style tale from the November 1952 issue of Baffling Mysteries #11. And even though there’s no credit on this story either in the issue itself or on GCD, I’m going to lay good money down that this is Gene Colan. [GCD now thinks you are right, Master Karswell. -- Nequam] I did this once before on another unaccredited Colan story and got the “Ger Seal of Approval,” so I’m 100% sure I’m right this time as well. And if I’m not I’ll eat my horror hat. Hmmm, that sounds familiar too… 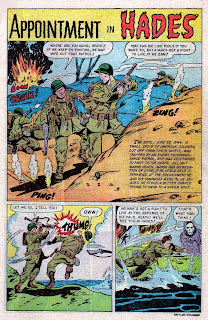 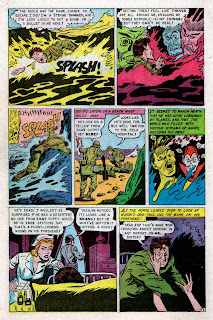 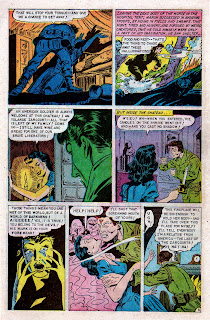 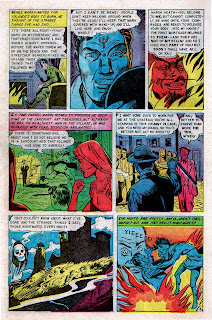 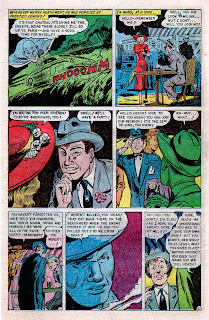 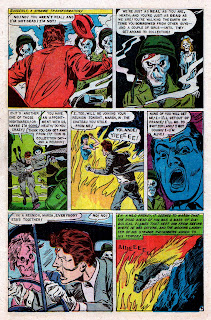 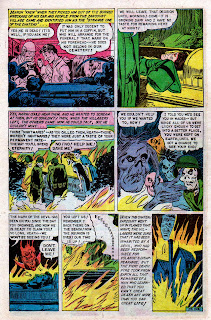 Currently, Gene’s official website does show that he created at least one other known story for Ace’s Baffling Mysteries series, called Flee the Other Self, issue #7 from 1951. But the only other Ace entry I could find listed there was in the August 1951 issue of Web of Mystery #4, called The Haunted Horse. Anyone know about any others?
++++++++++++++++++++++++++ 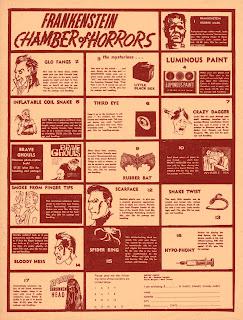 "I would've died for you!" "well now's yer chance!".i love how sadistic this is,the nurse,the burned body,wow.i'm also sure this is Colan.

Good story , very "Twilight-zone-like" ;I too think this is Colan .
Thanks for sharing

Crazy story and I think it's Colan too. He left the Timely bullpen in late 1949 and didn't return to Stan Lee (as a signing artist) until late 1951, so he must have been drawing something.

I like the raspberry, lemon, strawberry, and grape Kool-aid ocean on the first two pages. Also, when I see the giant floating death's head apparition pointing at me, I know it's time to adjust my master plan.

Best bit: the strawberry phantom at the bottom of page six. He deserves his own spinoff series.

I am not so convinced with Colan. Some of the anatomy here is odd, like the heads and the necks. On the other hand, some of the dynamics really look like him.

The story is crazy. "This fireplace is big enough to hold her body!" WTF? Didn´t he mean burn? Lol.

Yolande deserved what she got. Clearly, she's got some bucks, and all she offers Marsh is some bread and wine? Cheap Ass.

Good stuff - this is one where you don't feel sorry for the guy at all, his fate was deserved.

Ah, gee...I was going to point out the story is signed by Ping and Zing, but then I realized that's onomatopoeia. My eyes are going bad from looking at all these comic books.

Anyway, my guess is that it's loose Colan pencils inked by a lesser talent. It looks hurried to me.

It sure looks a lot like Colan, but also here-and-there a bit like Tuska. Colan had a way of drawing the neck-and-jaw when viewed from below which I find a dead give-away, but none of the panels in this work position a character with that view.

THIS REMINDS ME THAT I'D LOVE TOSEE MORE SPOOKY WAR STORIES IF YOU HAVE THEM. AND THIS IS TOTALLY COLAN NO DOUBT.

"Marsh Heath"? I wonder how close he came to being named "Sogg Swamp"? ;)

We've seen a lot of bastards get their comeuppance at THOIA, but Marsh kinda takes the cake, doesn't he? A coward, a serial killer, a thief and upper-crust snob--really one for the hall of fame. If he'd only turned some of that kill-crazy rage of his against the Nazis instead of nurses and heiresses, maybe things would have been different.

BTW, I noticed in the classic ad an advert for the "Hypo-Phony"--by a strange coincidence, I recently read this excellent article on Secret Fun Blog about the creator of the Hypo-Phony, Marvin Glass. A fascinating character. The article is a bit long, but it's a great read about a strange, eccentric, kind of tragic man who made his fortune making kids happy.

my first exposure to Gene Colan was in the '70s first with the Marvel Dracula series and then Howard the Duck, both of which i loved. so strange to see this early example!

and concerning the Frankenstein Chamber of Horrors ad, anyone here have a copy of Brave Ghouls?

All the skeleton artwork in these recent stories has been great! Pretty cool to read a story with Sgt. D from S.O.D. in it!!

Hahahaha... good one Patrick! Got another Ace tale tomorrow too, though it's not Colan, or even someone's style who looks like Colan it's still a "striking" tale.

FYI: I also apologize to anyone who ordered a shirt (or won one) and still hasn't recieved it via mail. We're getting the new batch in either later tonight or tomorrow and I will being hitting the PO no later than Friday. Thanks for your understanding.

There's some really cool art concepts in this story. I especially like the "civilains" suddenly turning into the army-suited zombies.