Wild Spree of the Laughing Sadist

If you’ve got a thing about cruelty to animals you may want to skip this post, (or at least the first couple pages), in fact our subject today makes the killer in that Zebra story from a few months back look like Rebecca of Sunnybrook Farm. And as the level of brutality displayed here reaches almost cartoonish proportions, you can’t help but laugh at the excessive picture they’re attempting to paint of this lovely chap. But guess what? It’s all based on a “TRUE” story! Check the link after the story below... 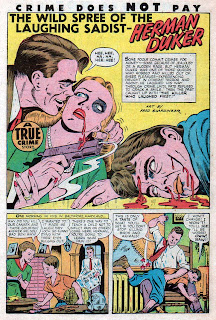 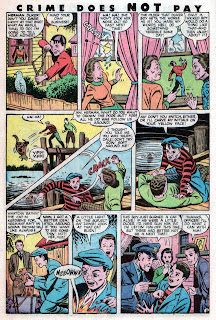 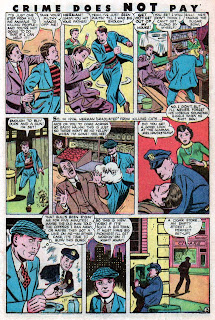 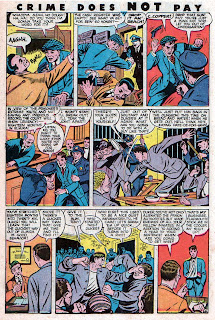 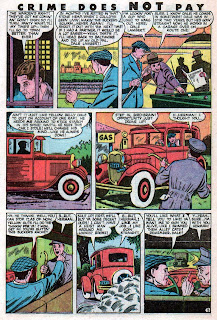 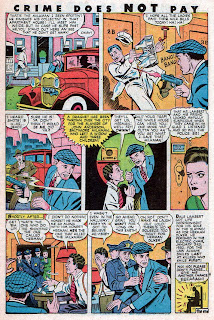 In 1949, Maryland adopted a pioneering “defective delinquent” law when a young legislator was moved by a series of senseless, violent Baltimore murders. The 19-year-old son of a wealthy family, Herman Duker, held up a milkman, father of two, and without provocation shot him dead. As a small child Duker exhibited appalling cruelty to animals and deviant sexual behaviors, both of which persisted for years. Arrests for thefts and burglaries began at an early age. At 16 he was diagnosed as a psychopathic personality, and two years later committed his sensational murder.The judge sentenced Duker to hang because, he said, if given a life sentence the violent young man would be a lifelong danger even to the prison guards. 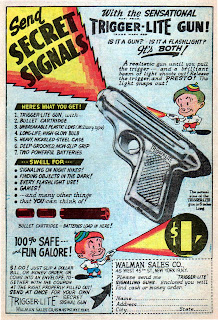 And don't forget to head over to Chuck's Comic Book Catacombs today for another look at the "lighter side of crime", this time an Atlas spoof on Gang Busters and Crime Does Not Pay. It's a silly classic illustrated by future MAD Magazine legend Dave Berg!
Posted by Mr. Karswell at Sunday, June 29, 2008

I'm glad the comic left out the deviant sexual behaviors.

According to the Chicago Tribune, it was Duker himself who wrote and drew the story: “The Laughling Sadist”, from cartoonist Herman Duker, who wrote the comic book Crime Does Not Pay. (Farrar, Straus and Giroux) :-O

If it wasn't based on a true story ,it would be great unintentional humor , stuff like these filled the lurid pocket sized comics in Italy when I was a brat ...

I like the linked article as much as or more than the comic. Thanks for the bonus!

"Bill! He's taking the sugar bowl!" That cracks me up every time.

GOD IF THAT BRUTAL SPLASH DIDNT GRAB YOU FROM THE GET GO NOTHING CAN! GREAT ART AND NICELY WRITTEN, ALTHOUGH BEING A TRUE STORY I GUESS THERE WASN'T MUCH EXTRA THEY OBVIOUSLY NEEDED TO DO.

THE ARTICLE AFTERWARDS WAS ALSO A FASCINATING READ, BUT DID THEY HANG DUKER OR SEND HIM TO THE CHAIR?

>I'm glad the comic left out the deviant sexual behaviors.

>“The Laughling Sadist”, from cartoonist Herman Duker, who wrote the comic book Crime Does Not Pay. (Farrar, Straus and Giroux)

>BUT DID THEY HANG DUKER OR SEND HIM TO THE CHAIR?

That all depends on weither you believe a fact based article or a comic book adaptation. Maybe they hanged him first and then put his corpse in an electric chair (or vice versa) you know, to really seal the deal?

That was just...damn...just...damn..that splash was so ott it was scary,and the animal scenes..shit.as for the sugar bowl thing,yeah that was unnecessarily stupid,and so was the contention that Duker wrote and drew this himself,was that rumor based on Bob Wood,or did it predate him?

Love these ads... the comic reminds me Reefer Madness movie... the fist panel is a piece of art!

My pug, Bandit, was offended by the animal cruelty so I let him read some Richie Rich books to get over it.

>>BUT DID THEY HANG DUKER OR SEND HIM TO THE CHAIR?

>>That all depends on weither you believe a fact based article or a comic book adaptation. Maybe they hanged him first and then put his corpse in an electric chair (or vice versa) you know, to really seal the deal?

According to the article, the governor commuted the sentence.

>According to the article, the governor commuted the sentence.

>the contention that Duker wrote and drew this himself,was that rumor based on Bob Wood,or did it predate him?

That was just lazy or stupid journalists not parsing the splash page correctly.

>a lesser sentence of being executed in the electric chair in a comic book.

Well, I ask you, karswell, if you were offered the chance to be executed in the electric chair in a comic book, would you say no? The governor could unleash a wave of crime perpetrated by comic book fans!

"Look at that cat burn!" Uproarious.

On a much darker note, I think my neighbours' kids are Sadists in Training.

I wish that were my governor.