Okay, here’s the deal: I have less than 10% free blogger space left and its dwindling fast. Once it’s all gone then so am I… that is, unless you can help. I hate to sound like Jerry Lewis, Sally Struthers, and NPR all rolled into one here but a pay pal donation to me at karswell@hotmail.com will keep THOIA alive for another year.

This shouldn't really be shocking news to anyone, as I've been hinting about it for months now, but think of this as a fundraiser of evil, and certainly no donation is too large or too small. PLUS! Whatever your wallet can spare puts your name into a fishbowl with 3 lucky first, second, and third place name drawings! Prizes include:

1st Prize: the September 1954 issue of Strange Mysteries #19, fair grade, complete. Four stories including: Preview of Chaos, I Am Murder, The Playful Executioner, and Was He Death-Proof? Plus a signed reproduction Ghoulunatic photo of EC’s Crypt Keeper. 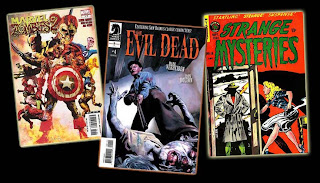 Fellow bloggers who donate to THOIA’s cause will receive another option: Donations of $25.00 or more automatically gets you a spiffy new blog banner designed by myself if you so desire. For examples of my banner designs check out Mad Mad Mad Mad Movies, Love Train for the Tenebrous Empire, Theofantastique, and Zombo’s Closet, as well as the LOTT D mummy insignia and THOIA banner. Any other questions just email me.

If you’ve enjoyed the FREE daily dose of goose bumps I’ve been providing for the last year, then please help during this critical time. If you don’t have a pay pal account then just email me and we can work out something else via snail-mail, money orders etc. The fundraising of course never ends, but show your support ASAP as the three drawings will be held on lucky Friday, June 13th, winners will be announced the same day.

Thanks again to those that have already donated (your names have been added to the drawing too.) The first year of THOIA has been a blast; let’s make it last for many more!

A little background on the legendary EC novelty "Ghoulunatic" Photos: 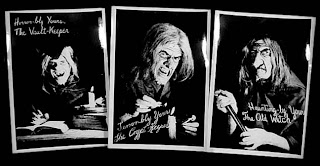 In 1950, EC horror comic’s creator Bill Gaines authorized his resident office boy Paul Kast to attempt a promotion selling real photo sets of the Ghoulunatic storytellers, The Crypt Keeper, The Vault Keeper, and The Old Witch. He generously allowed the youth to fully execute his idea as well as retain all proceeds from the promotion to help pay for his college education. The photos were created one night at the EC offices when Al Feldstein applied make-up and wigs to fellow EC artist Johnny Craig who enthusiastically played the part of each character. Kast captured the results with his camera and Craig later retouched the pictures to complete the illusion and mood. The final product was offered through EC Comics popular letters column for a quarter each. They ended up surprising everyone by selling around 10,000 copies during the 2 year promotion. Today they are extremely rare and highly collectible. The photos offered in the THOIA Giveaway are 5 x 7 glossy REPRODUCTION photograph copies and resemble the original product in every detail. Good luck!
Posted by Mr. Karswell at Tuesday, June 10, 2008

Didn't send much, but I love your work.

Glancing over the Google help file, I notice that extra storage is a yearly cost, meaning that the price for your archives will continually elevate your yearly fee. I also notice that it isn't all that expensive (within reason) to purchase extra space.

What I want to know is: are you just now reaching the end of the free gig everyone is allotted, or are you already purchasing extra storage? If you've gotten this far on one gig, then the twenty bucks a year option should score you about nine more years worth of archiving, based on current averages. That's not going to be too intolerably much panhandling, I don't think.

Plus, everything is mitigated by the amount of remaining material you have to post, and your interest in keeping the archive going once you've depleted your collection of source materials (plus what your readers donate in the way of scans, of course).

Have you thought about seeking other free services (like Photobucket) and just linking some story pages a la Pappy? I can't see any way to donate directly to your cause right now (no Paypal, and mailing checks from Viet Nam is out--I imagine you don't really want donations in Dong, anyway), but I'd be happy to donate some storage space from my own Blogspot if it comes to that.

Is there any way this could go to Monday instead of Friday?

No paypal accounts are active in the Catacombs, Karswell, but if you can drop by there, click email and give me an address to forward a money order and I'll see what I can do.

Hello Karswell ; these days I really can't afford to donate cash , but I have an additional idea ; I'd be glad to donate a piece of artwork that you could sell via Ebay to raise funds , and I guess other fellow artits could be glad to do the same ...
Just let me know

YOU CAN COUNT ON ME, DONT HAVE PAY PAL BUT I'LL EMAIL YOU FOR YOUR ADDRESS. THANKS MAN,YOU DESERVE IT!

All questions aside, I'll just say that the way I have this Giveaway / Giveback laid out is how it will play out. All money accumulated by Friday will go directly into the storage options offered by google: if I make a total of $20 then that's an extra 10GB, if we make $75 total then I'll have 40GB to play with for the next year (which means even LARGER scans for everyone to drool over) and so on...

I truly appreciate all the generous donations so far this morning, you guys are the greatest! Those with offers of sharing storage space or story / artwork submissions should contact me at karswell@hotmail.com