Someone's been asking me to post this story for months now but I thought I no longer had it--- when suddenly I remembered that I did have it reprinted in an issue of Thrills of Tomorrow. It’s an okay little Harvey yarn that coincidently matches up perfectly with the Attack of the Puppet People post for today. 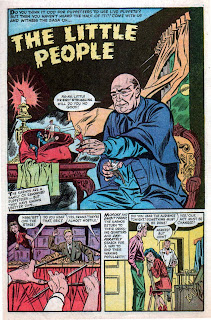 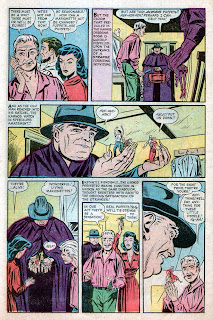 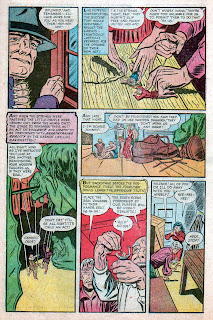 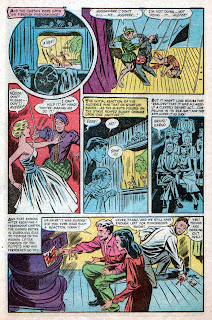 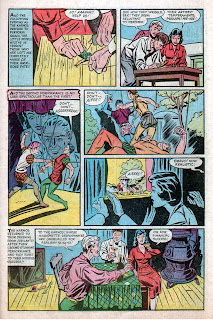 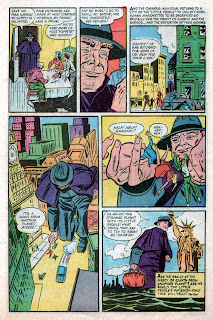 Thanks very much for that little gem. I've been waiting for this for months. Would you be kind enought to post "Shrinking Horror"? Thanks.

Oh man, fantastic! It didn't end at all the way I was imagining it would--I figured the Karnoses would have to replace their puppets in someone else's sadistic show. But this is better!

Lots of great stuff in this one--if I may...

Page 1, panel 2--Tough crowd. From my days in a metal band, I know that it's ALWAYS a bad sign when there are more people on stage than in the audience. Plus, who heckles a puppet show? Honestly!

And them cremating the little folks in the Franklin stove! Grim! I love the detail that at the bottom of pg. 5 they've just left a pile of little corpses on the ground. Too bad they don't have a cat!

"Are we really at the mercy of giants from other planets?" Boy, that's made me think twice! ;)

And one more thing...how does a string manipulated from above force a downward stab? I think the little people might be complicit here...who knows the interpersonal problems that living in a shoebox will bring to the fore?

Not bad, who's the artist?

What's funny is I read the Vicars comments before actually reading the pages and what he said is alot more interesting than the actual story.

>what he said is alot more interesting than the actual story.

Ha ha, yeah The Vicar has quite an eye for sifting out the good stuff. If you'd like to read more of his stuff check out the MAD MAD MAD MOVIES link at the bottom of my blog in the links list... it's his horror movie review site and full of all kinds of great stuff.

I always found this story mean spirited and disturbing, what with the laughing cremations and all. In other words, I've always loved it! I think I actually shivered at how badly the "puppets" were treated the first time I read it all those years ago!