Sterling Comics only released two issues of The Tormented in ’54 before the Comic Code steamrolled them over, and thus forced them to change their name to the surprisingly bland “Surprise Adventures.” Zzzzzz. But before they went down for the count, they managed to produce a handful of well written / illustrated horror knock-outs, like the next two posts here from the July 1954 issue of The Tormented #1. 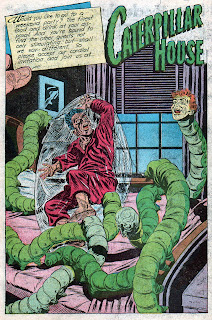 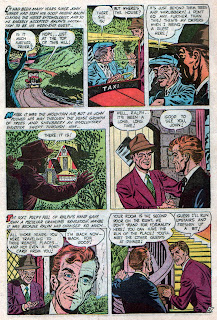 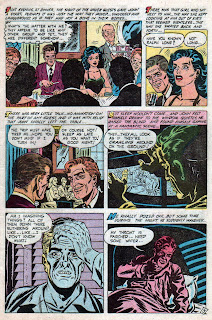 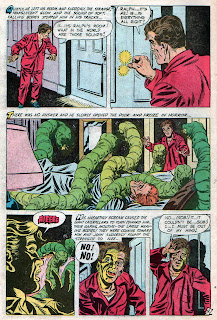 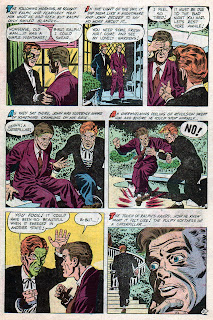 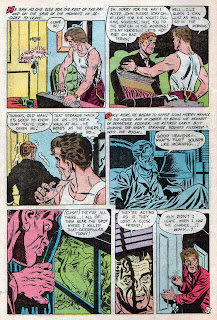 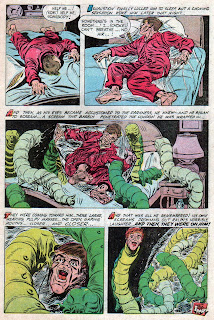 THIS ONE IS REALLY MESSED UP..... NEVER EVEN HEARD OF THE TORMENTED SERIES

this is a pretty good story, but only in a precode comic could giant caterpillars be scary...... i was laughing at the wimpy dude on the last page first panel where he falls on his bed like a little girl and screams for help

There's a very good short story by E. F. Benson called Caterpillars that is actually quite chilling too... possibly it was influencial on this Tormented tale?

If you wanna read a good Benson story,read "The Confession of Charles Linkworth".Great story,great artwork and a great buildup of suspense,only problem is that were never explained the genesis of the caterpillar people or how they change to human form,or why Ralph's one,but whatever,its best left to the imagination.much as i relished it,i coldn't stop thinking of Lewis Caroll's character and Hurl Ives's song "ugly bug ball"

I've read pretty much everything by Benson, him and M. R. James are my two favorite authors... those old English fellows from over a century ago were the TRUE pre-code masters and creators, hell even the Weird Tales guys learned all they know from them.

if I had a dime for every time i ended up at a party where i felt soooooo out of place.....

Could be that butterfly costume you always wear to the parties though Eric... makes people feel uncomfortable.

I think this pretty much is EF Benson's "Caterpillars" (1912) which the writers decided to "improve" by making the caterpillars man-size. It has an almost identical setup and if you look at the scene with the mourners you will notice that one of them is the character of the protagonist's friend's wife, who was omitted from this story but inexplicably included in that scene.

Many years ago, I read an old story in which the narrator was visiting friends in Italy and during the night saw an empty room in the house filled with luminous caterpillars whose feet dug into the floor. Said caterpillars pursued the narrator but left him to enter the room of one of the fellow guests - an artist? - who subsequently developed cancer. Turns out the empty room was occupied once by someone with cancer. The artist found and then killed a caterpillar by the fountain in the garden, if I recall correctly. Seems thematically very similar to this story except in the ending.