Slaves of the Undead Brain

Okay, we've had an undying brain, a buried brain, and today we unleash the "Slaves of the Undead Brain", from the January 1955 issue of The Beyond #30, ...and incidently, this story comes from the very last issue of this super great Ace Magazines series (it was only a matter of time after The Beyond #27 was left burned and smoldering in the "Seduction of the Innocent" witchhunt.) This concludes "Brain Fest 2011", as well as all THOIA posts for February 2011, hope you enjoyed it-- see ya's next month! 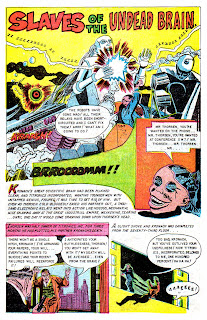 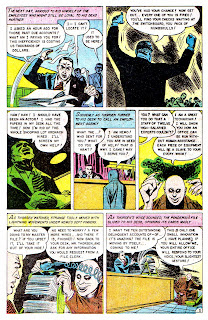 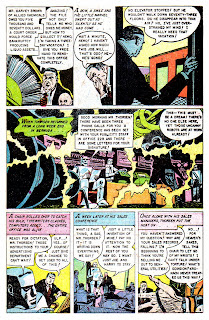 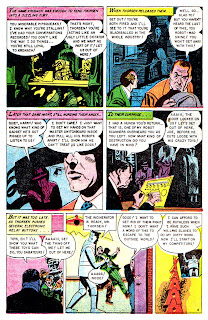 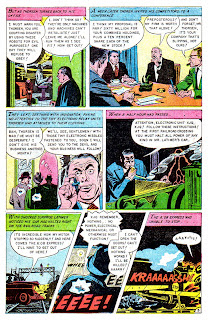 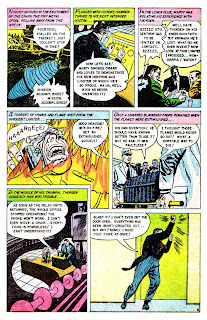 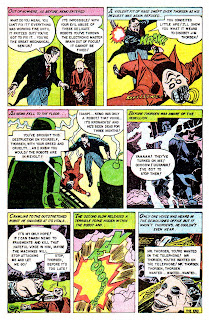 Email ThisBlogThis!Share to TwitterShare to FacebookShare to Pinterest
Labels: Ace, Louis Zansky, robots, The Beyond

Really, the title alone was enough for me, but the story turned out to be pretty damn entertaining.

Please allow me to introduce myself, I'm a man of wealth and taste.
I've been around for a long, long time, stole many a boy’s soul and dime.
We rode in tanks, held general's ranks when the Blitzkrieg raged and the bodies stank.
I read with glee your blog daily.
Pleased to meet you, Hope you guess my name.
Nah, you can’t really. I’m new to this blog.
I’m a german PCH and EC-aficionado and wanted to say Hello just now – as you posted SLAVES OF THE UNDEAD BRAIN.
This issue of The Beyond is the ONLY PCH comic book I actually OWN.
We european fiends feed on reprints, the Digital Comic Museum – and your blog of course. Hats off to the master.

Anyway: SLAVES OF THE UNDEAD BRAIN is quite spectacular. One of the most complex, most fantastic, most tightly packed and craziest stories of its time (1955).
Great fun as well. “It’s icredible how my motor stopped so suddenly! And here comes the 6:08 express!”. Wonderful, just wonderful.
This anticipates James-Bond-gadgetry as well as movies like “Westworld”. It’s pure madness. That’s what I love about fifties comic books.

I really really liked this crazy brain-themed month. I never thought about it, but brain-related horror and sci-fi is typically the very peak of oddity. Today's story peaked more than most, actually. Magic robots operated by revenge computers with a Ouija connection to the dead? Awesome. It must be some kind of dead man's logic to put off exacting your revenge until just after all of your loyal friends have been violently killed.

Also, this crazy story has the most Fruit Stripe-a-licious zone coloring scheme I've seen in a while. And speaking of that, I love that rainbow sarcophagus on the cover.

Some really great comments on this story so far (and apparently from all around the world too-- welcome aboard the THOIA Horror Express to all friends old and new!)

Before we kick the terrors back into high gear here in March, I also want to remind everyone you can get more classic brain tales in the THOIA Archive, for example:

Basil Wolverton's BRAIN BATS OF VENUS, Russ Heath's THE BRAIN / RETURN OF THE BRAIN double header, and last but not least, the disgusting QUIVERING BRAIN tale! These can all be found in the July, September, and October 2007 archives filed away on the righthand sidebar, or use the search engine at the top of this blog. Back in a bit with more horror!