We talk alot about reprints / remakes around here, for example the way Eerie Publications revived a ton of great 1950's Golden Age pre-code stories 20 years later, and in the process intensified the horror by expanding upon certain visual elements with more insane levels of gruesomeness in the art (and story.) But as we clearly see in today's post, Marvel went the opposite approach with 70's color horror reprints of their own pre-code Atlas tales: 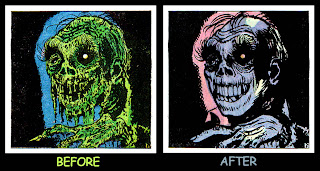 "The Ghost Still Walks" originally appeared in the May 1952 issue of Adventures into Weird Worlds #6, and was later reprinted / revised for the Dec. 1973 issue of Dead of Night #1, (see THOIA Archive HERE for reprint post.) As you can see from the example above, this isn't just white ghost robes turning purple, these putrid Golden era ghouls are horrific, rotten, dripping, slimeball messes, vs their much tamer / lamer remake appearance... and I hope artist Joe Sinnott threw a goddamn fit over it. 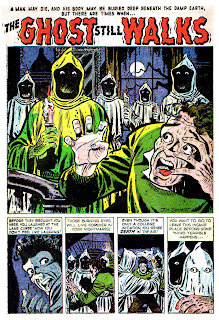 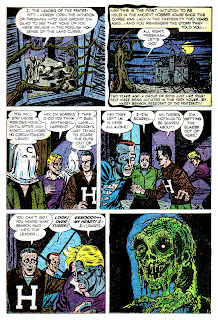 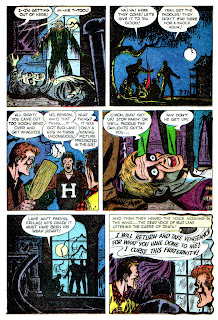 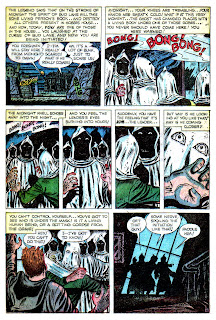 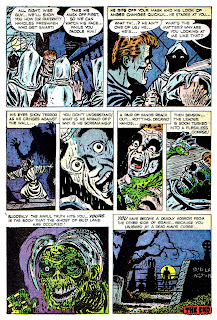 This is what I needed this morning! Joe's early stuff is so solid.

SINNOTS ORIGINAL ZOMBIES ARE AMAZING AND REMIND ME OF SOME OF THE WEIRD DRIPPY MONSTERS THAT EVERETT GAVE US IN THE 50S TOO. THE WATERED DOWN REPRINT ZOMBIE IS STILL COOL BUT DEFINITELY NOT AS HORRIFYING. IT IS COOL TO COMPARE THE TWO VERSIONS OF THE STORY SO THANKS!

Loved the way the zombie is drawn.

"Thank you sir may I have another"

I can't imagine Sinnott throwing a hissy fit. He's just so damn nice in person, but hey if he ever did, I would have liked to have sees that.

This stuff was great to look at, and I wish that I had thought to have Joe draw something like this for me. Instead I got an ultra cool Flash Gordon sketch off of him.

Sinnott probably had no say in the matter. Remember that the newly revised Comics Code still didn't specifically allow "zombies" in 1973.

I hadn't seen the original until now, but I remember the reprint and thought it had that look of being redrawn. It was either changed at the Code's direction, or changed before it went to the Code in anticipation of a rejection.

I read this years ago...that some religious types complained about zombies in the comics because they were sacrilegious, "parodies of Christ, a resurrected being." Anyone shed some light on that? If you're religious, would you agree with that, or do you think the complainer just wasn't getting into the spirit and the fun of the lurching undead?

A treasure! Thanks for digging it up and resurrecting the true horror!

Drew and Pappy bring up some interesting points about zombies vs "the code" ...anyone have the ridiculous comic code rulebook handy?

"Parodies of Christ" would be a good name for a band, or an album title.

Not a Christian, Pappy, but it seems to me that zombies, ie the resurrected dead, fit right in with Christian belief and aren't sacrilegious at all. Christianity has always taught that our actual physical bodies will be reanimated at the Last Judgment, even if they've rotted and decayed to nothing.

As the poet John Dryden put it,

"When rattling bones together fly
From the four corners of the sky;
When sinews o’er the skeletons are spread,
Those cloth’d with flesh, and life inspires the dead;"

The orginal 1954 Comics Code text stated in "General Standards, Start B": "Scenes dealing with, or instruments associated with walking dead, torture, vampires and vampirism, ghouls, cannibalism and werewolfism are prohibited."

The same section in the 1971 revision read: "Scenes dealing with, or instruments associated with walking dead, or torture, shall not be used. Vampires, ghouls and werewolves shall be permitted to be used when handled in the classic tradition..."

I don't believe (may be wrong) that the Code ever specifically removed the "walking dead" (zombie) prohobition, but simply applied increasingly weak enforcement as the 70s and 80s progressed.

The 1989 revision basically threw in the towel, essentially allowing whatever content “will be acceptable by a mass audience.”

>As the poet John Dryden put it

Nice excerpt... I need to look more into this one.

And nice work Drew, thanks for filling us in on the CC Zombie Rule! Interesting to see werewolves included with all things "living dead and/or vampiric" and so if this be the case, I guess the next THOIA post will contain some werewolfery... sound good to everyone?

Thanks for the great comments on the last few posts, it's nice to see alot of you back and joining in again! THOIA survives on what you think, and as always your suggestions and submissions are always welcome too.

believe in curses- they are real...

I have to commend the artist for using those Johnny Craig sweat drops on the forehead.

Thanks for this post! I never knew about the clean-up! Fascinating!

At a con a few years ago, I commissioned Joe Sinnott for a sketch. I asked him for a "scared face" because I thought he always drew great scared faces back in the Atlas days.

He did a great drawing and thanked ME for the suggestion. He said he always loved drawing the horror stuff and only gets asked to draw superheroes these days.

Next time I meet him... I should get a zombie!

Truth be told, I am more interested in pre-code horror from the perspective of social science than as entertainment. I saw most or all of the '70s Marvel reprints of the Atlas stories, but I've not before seen a side-by-side comparison between an original and a modified reprint, and I really appreciate seeing one now.

As a Christian, I don't see Zombies (or any other undead creature) as a "parody of Christ", but I'm sure there are those who DO feel this way. Of course, many Christians feel horror stories of any kind are "evil", while I feel quite the opposite. The best horror has always had a moral to it (just look at 90% of the old EC stuff).

This is why I part ways with many of my fellow believers, but there are still quite a few of us out there that dig monsters, love Halloween, and enjoy a good horror yarn.