In all my years of reading horror comics I've learned this important fact: corpses are razor sharp, and if you're not careful you can very easily cut yourself on one and start bleeding. What the hell am I talking about you ask? Well read on then if you don't understand or believe me. I mean, what--- you think someone actually makes this stuff up?!!

From the February 1952 issue of Mysterious Adventures #6 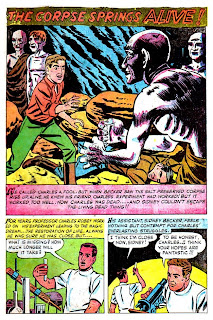 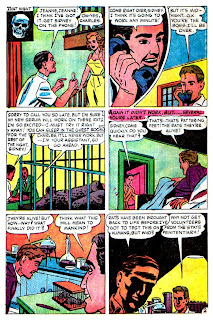 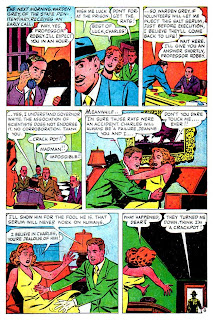 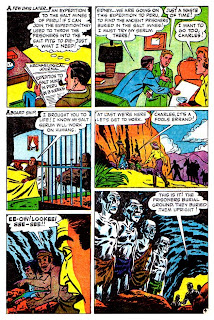 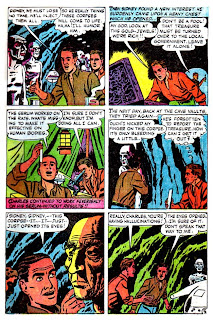 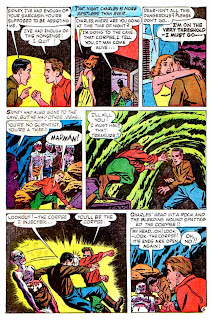 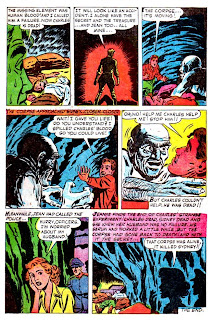 
NEWS ITEM: Jason Paulos is an Australian comic artist that has worked for DC comics and Judge Dredd Megazine, and his new solo horror anthology EEEK! is his love letter to retro horror comics, (in particular Charlton, HOM, Warren, and to a lesser extent 80's staples like Death Rattle and Twisted Tales.) Says Jason, "If you made a movie of EEEK! it would be described as the bastard child of Evil Dead and Austin Powers. One of the story titles is "Death Wears Hotpants" so you can draw your own conclusions from that." 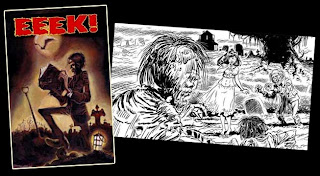 No rest for the dead in this one. Damn viagra, keeps us erect even after we're gone~!

I guess somehow being buried in a salt mine causes corpse flesh to become sharp. Ah well, it's not the clumbsiest bit of writing I've ever read in a comic book... let's save that for maybe the next post.

Thanks for the early bird comments too, keep 'em coming!

Great story. the weird colors make it even creepier. This is a great blog!!!

surandeThanks for the EEEK plug. the links aren't working for some reason. I just posted some images on the Asylum Press Blog

The book will be out for Sept. 2010 (halloweenish)

Am I imagining things or was there a Golden horror story about a man who could make himself as flat and sharp as a razor?

Not 'The Flat Man' stories from Journey Into Fear No.19 or Spellbound No. 3... but something just as outlandish.

I WAS GLAD WHEN THE ZOMBIE KILLED SYDNEY, MAN THAT GUY WAS ANNOYING! COOL POST AND THOUGH THE ART SEEMS KIND OF CHEAP IT WORKS WELL WITH THE SILLY STORY.

>Thanks for the EEEK plug. the links aren't working for some reason.

>was there a Golden horror story about a man who could make himself as flat and sharp as a razor?

Doesn't sound familiar to me but if anyone else reading this knows about it please let us know, or send me the scans as it sounds too good not to post! Thanks gang!

i DO like my corpses with a lot of salt, yummy!...

Shouldn't it be "The Corpse Springs Ahead?" I gotta go check my watch.

How convenient that "the corpse had gone back to death!" Otherwise, we would have just been left hanging.

Haven't we learned not to spill blood on corpses by now?

>Haven't we learned not to spill blood on corpses by now?

I'm glad to see more comments still coming in-- The Corpse Still has Some Life!

Got a wild Lou Cameron tale coming up later this week, but first another AC Hollingsworth atrocity full of suicide, ghosts, corpse desecration, and bottom barrel art --be here at midnight!

Ooh I love comics, thanks for posting! Can't wait for the next one!

Although I like comics, I never was a fan of horror ones, somehow they are too fantastic, generating psychological problems for those who are reading them.