Okay. Last month I misunderstood my friend Carlos after posting examples of his spanish version of THIS WIG STORY. The truth is that his scans (located at the bottom half of The Hungry Lodger post HERE) were actually translated versions of a Bud Thompson tale from the December 1953 issue of This Magazine is Haunted #14 (which I do not own), and everything is the same except for the text, so it’s not a “foreign re-make” as I called it. And technically I shouldn’t call this “The Wig 2”, as this one contains its own clever plot twist differences, plus it actually hit stands one month BEFORE the Out of the Shadows version. Whew! Got all of that? Anyway, a weird coincidence, or another example of publisher swipage? Or is this based on some piece of horror literature that I am unaware of? 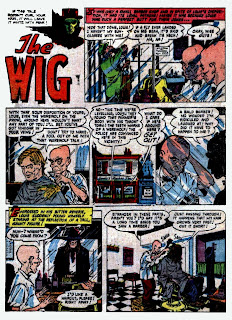 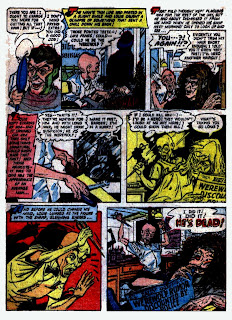 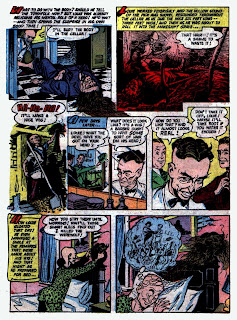 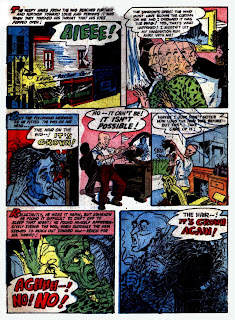 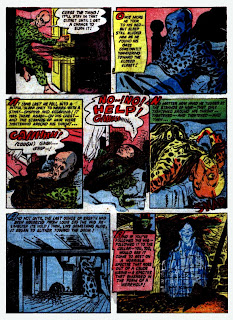 Thanks again to Carlos Federici for the scans! 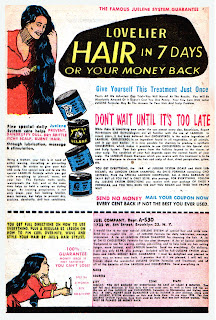 I like this one better than the other, I think, except for one thing. I consider a werewolf more sympathetic than some jackass who just makes fun of his bald barber, so Louie's killing the werewolf seems a little less justified.

And i thought this concept couldn't be more crazy....

What a neat werewolf story. I certainly think this version comes off more compelling than the one that was posted before. I mean, I can believe in the supernatural aggression of a werewolf's hair way more than the magical revenge powers of a frat boy's tow head.

Thanks so much Carlos Federici!

What a bizarre rewrite. Guess they were silver scissors.

Thanks for posting the original (?) Wig - I also liked this one a little more than the previous post. It seems our killer barber has more of an incentive for killing his patron and I like the idea that he believes himself to be a hero for his action. He isn't eaten up by guilt, which makes his death somehow more interesting to me in this version. Plus, this barber is much, MUCH creepier in appearance, and that little sprig of hair on top of his head looks all the more odd.
Hmm, the addition of eyes to the terrible strangling wig makes it look like that smog monster from the Godzilla movies.

I agree with the others - better story, although I preferred the artwork in "Wig 1".

I wonder.. are there any 'wig' stories that don't involve a bald barber? Thought the 'wig eyes' on the last page was a nice touch

I agree, this version has a better set-up / hook with the whole werewolf angle. Initially I thought I liked the artwork better on the other Wig version but the more I look at this one I agree with Carlos and think I like it better here... Bud creates a better sense of unease with his looser, haywire pen. The coloring is better on the other story though.

And so the werewolf murders continue by--- Werewolf Spectre Wig!

GUESS I LIKE THIS ONE BETTER TOO BECAUSE OF THE WEREWOLF CONNECTION. FUNNY HOW IT IS STILL SO MUCH LIKE THE OTHER ONE BUT THEN AGAIN TOTALLY DIFFERENT. SMOG MONSTER! GOOD ONE SMILADONNA!

Wow, what a crazy little story! I'm kind of glad I missed the first one, so I could come to the remake/sequel/prequel fresh!

Louie really is a pinhead, though--his plan for becoming the town's hero is just not very well thought out at ALL, is it? Bury him in the cellar? What kind of occasion is he waiting for to spring the news? And what does he imagine the townsfolk will think?

I admit this one kept me guessing--I was thinking the hair really WOULD take root and turn him into a werewolf by unusual means. The "werewolf goes to the barber" plot element was nice too--and Squa Tont already pointed out those crazy "wig eyes."

As to literary traditions, I know in the Japanese classic Kwaidan there's a segment about a woman's long hair coming to life to get vengeance, which is of course taken from a very ancient folk tale. But there's no bald barber or samurai werewolf in that one. Still, imagine if it had been!

And, fusing those ideas into one linky tidbit, I give you:

Samurai Werewolf. Now there's one John Belushi never got around to. Not Super Friends, either.

So he kills a customer who doesn't care what he charges, and comes back every day?

What a dork...the most hairbrained barber I have ever seen; definitely.

Jonah Hex was a werewolf? since when?