GCD claims this story first appeared in Weird Terror #2, but I see no listing for it in said issue unless it was titled something else. Today’s post, (definitely called The Shrunken Skull), is scanned from the September 1953 issue of Horrific #7. Now let’s fast forward 16 years… here it comes again in 1969 courtesy of Eerie Pub and reprinted in B&W in Horror Tales and Terror Tales with not one, not two, but three re-make versions (all re-titled "Skull in a Box.") Typically the script is nearly identical to the 50’s version while only the art has been somewhat modernized, though less slick. 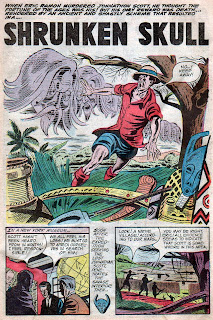 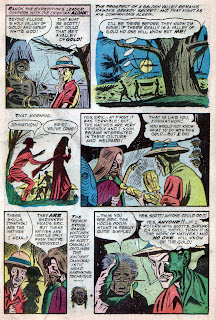 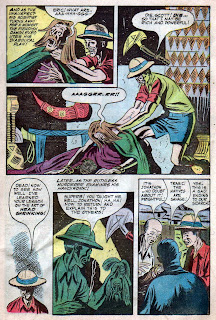 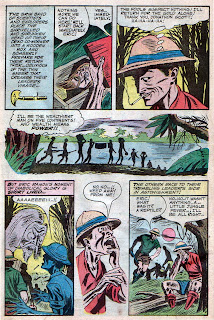 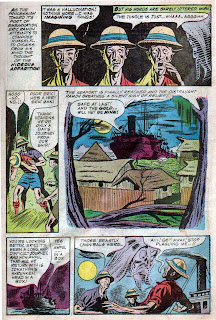 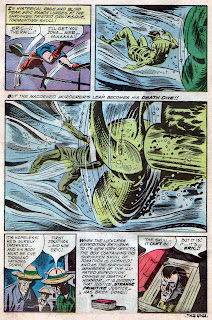 And if that's not enough reprint info you can also read this story reprinted in the great Zombie Factory collection from Idea Men Productions. Whew!

Regarding Eerie Publications. I recently discovered that of the 1,000+ stories they did ALL but (at most) 4 of them were remakes or reprints of pre-code stories.
Everything in Zombie Terror, except (possibly) Voodoo Terror is a pre-code remake.
Of stories you've posted recently, Eerie remade Tank of Corpses, Escape to Death, and The Coffin (and that's only the ones I know of).

VERY COOL ENDING......WEIRD IT GOT REPRINTED SO MANY TIMES. WHO'S THE ARTIST?

That's a startling percentage! And like today's story, how many of these stories were re-used multiple times?

Eerie reprinted stories multiple times, but the 1000+ figure is the number of unique stories they did (i.e. not including reprints, counting those, they probably did 2000-2500 stories). I only have about 40% of the Eerie Publications issues but I've seen stories reprinted up to 5 times. Skull in a Box was probably reprinted a few more times as well. I'm only referring here to when they just reprinted the same story as is (same script, same art etc). They would also somoetimes reprint a story twice with two different titles and two different artists (mostly, if not always, when the first version was a straight reprint of an Ajax story). For example, they reprinted Death On Ice (from Strange Fantasy #6) with the same title, then reprinted it with the title (The Frozen) Mummies then remade it with new art aned called it A Tomb Of Ice. They would also sometimes reprint the same story with the same art but just change the title.
Eerie also printed the occasional text story, but these too were reprinted from old pulps with new titles and usually no credit given to the original writer.

I found it mediocre at first,especially never getting what could have been great gross-out scenes,because you know i loves me some decapitations,but the ending...WHOOO! what a way to go!,one of the best deaths i've seen anywhere!,it gets a 10.

Agreed. And the ending is probably the main reason this story has been reprinted / remade a billion squillion times.