As long as we’re having a Creepy Magazine fest for xmas here’s a picture of my friend Eric taken in the mid 70’s. Check out that awesome shirt! Santa’s lap obviously wasn’t creepy enough for him so he’s sitting on the knee of St. Louis celebrity newscaster Cliff St. James, (who also doubled as Corky the Clown for the local kiddies.) 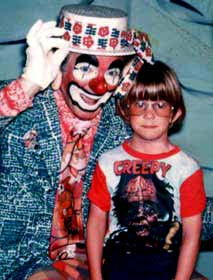 Izzat kid sitting on the lap of John Wayne Gacey?

AWWWWWW HE SO CUTE!

If you like good rock 'n roll Eric is also the bass player for Shame Club.

They have a new album out so look for them on tour soon in your town: http://shameclub.com/

And I think you can see Cliff St. James in local commercials for retirement living.

Dunno what ever happened to that shirt, my Mom probably pitched it as soon as I outgrew it. I bet my Dad bought it.

Only other time i remember wearing it was on a "pirates treasure boat ride" in the Ozarks. There may be photos from that day floating around somewhere too.

thanks for the Shame Club plug, Karswell. Ive got my "horrors of it all" banner firmly embedded on my myspace page. Best blog on the net.