My Dolly is the Devil

Last week we had voodoo dolls, today its devil dolls! Originally presented in the November 1950 issue of Black Magic #1, it's an eerie, simple little tale about a possessed doll. I would also like to take a moment to point out that this story saw print 13 years before the airing of a very similarly plotted Twilight Zone TV episode called Living Doll (aka Talking Tina), starring Telly Savalas. This is another topic I would love to expand upon in future posts; TV shows and films that unabashedly borrow or steal directly from pre-code comics. If you know of some yourself please let me know. 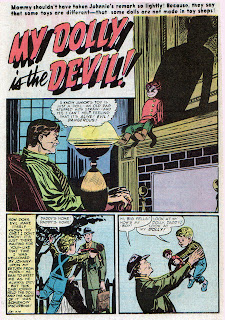 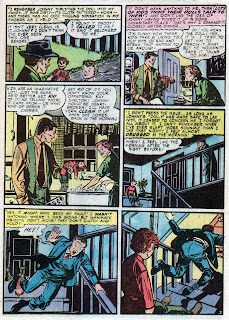 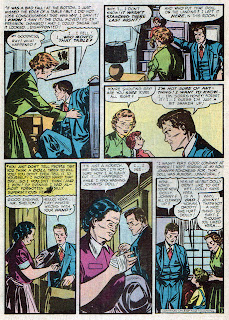 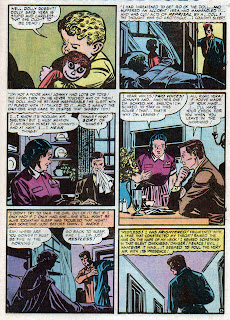 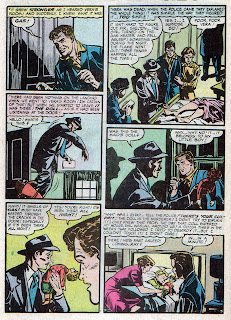 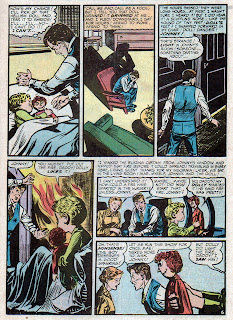 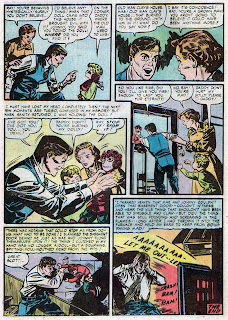 I have reason to believe that this story may have been layed out by Kirby,and then done by one of the numerous assisstants in the Simon-Kirby studio,because NOTHING in this story looks like it was done by S&K,but the story,however;IS quite famous,ranging from the afore mentioned TWILIGHT ZONE episode,the CHILD'S PLAY series,i even recall a stoy in the MAGAZINE OF FANTASY AND SCIENCE FICTION called "Felly",with a similar plot,hell,even Jack did a version of this story in an atlas monster story(where the doll turns out to be a benevolent,if asshole-ish alien child.),it would have made a better story,however if it revealed the doll was sent to a trailer in Houston TX,in 1994,a fire broke out mysteriously,but the only ones blamed were two stupid teenagers,one escaping,the other calling himself "Cornholio",surely it was them,it couldn't have been...the doll!!....well it would be a good story since half the crap in BLACK MAGIC was said to be true!.

Strange World of Your Dreams was another Kirby title that was based on supposed "true" events, though in this case through 50's era psycologically over-analyzed dreamscape mumbo jumbo. Still a few stories were pretty well done though not always scary, as can also be said for the Black Magic series.

POSSIBLY KIRBY DID THE PENCILS TOO, THE FACES LOOK LIKE HIS.

Pencils and inks on this story were done by Leonard Starr.

my name's talky tina, and i'm going to kill you.