An anonymous commenter the other day asked me to post an example of “stupid and derivative” so ask and yee shall receive! It’s not the best worst example I could find, in fact it’s actually a fun little stupid tale of sudden insanity leading to over the top brutality and gory violence. But then again it loses points for not being especially well written, and you can knock off a few more points for Mannie Bank’s somewhat flimsy artwork. It’s definitely inspired in a maniacal sort of way, but it was greasy shock stuff like this that really nailed the coffin lid tightly shut on pre-code horror comics in ‘54. 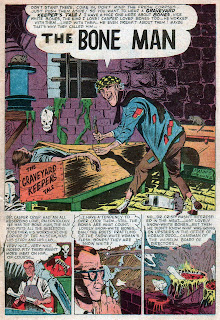 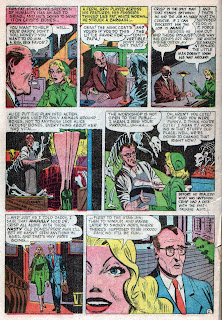 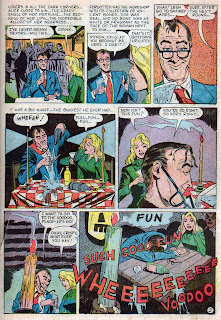 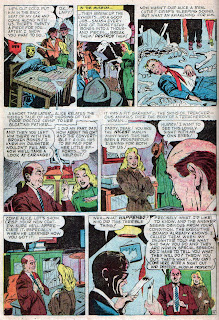 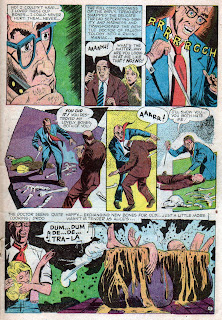 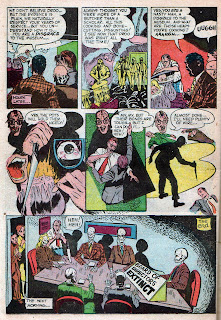 FLIMSY INDEED......LOOKS LIKE A HIGH SCHOOLER ILLUSTRATED THIS ONE! THE MONTAGE ON THE LAST PAGE WITH THE MOUTH AND EYEBALL AND CAULDRON IS HILARIOUS

IT IS KIND OF A COOL STORY THOUGH YOUR RIGHT, IF ONLY IT HAD COME TOGETHER A LITLE BETTER AT THE END AND MAYBE BEEN DONE BY JOHNNY CRAIG INSTEAD

Yeah, as I mentioned it's definitely not one of the worst examples I could have shown... I have a few issues of Star Publications SPOOK series, and though they have wild, terrifying L.B. Cole covers the stories inside are just total junk with awful writing and only marginally interesting art. I haven't been especially impressed by Fiction House's GHOST series much either, superb covers and sometimes gorgeous artwork inside, but the stories always seem muddled with alot of vague wank happy endings and no real thrills (like one story in particular I have that's about haunted bagpipes or something, whatever...)

Also, in Mannie Bank's defense he did do some good work for Marvel. His Bone Man story looks rushed and uninspired though. Possibly Premiere Comics paid worse than Atlas... ha ha

So now we know the grim truth about how Casper Crisp's illegitimate son,Casper jr. became a ghost....

Pretty clever in that ridiculous pre-code logic sort of way. Is the rest of the issue that vioulent? I was never able to track down a copy of it.

The rest of this issue is okay. I mean it's gory for sure and I'd say pick it up if you can find it cheap, but Bone Man is probably the best story overall... ie: the opening story splash panel has a guy getting his throat visciously ripped out by a werewolf plus a few other bloody moments, there's also a dog getting strangled and a mad professor revealing that he's actually a "revolting lump of scarred flesh" under his phoney daytime cosmetics and prosthetics... a mix of funny and throw away tales, nothing too bone-chilling, the front cover says "Read--- The Corpse Returns!" but there's nothing inside the comic called that. Ooops!