To Kill a Werewolf!

It's another haphazard Werewolf Wednesday, yes, I know it's been awhile --and man when was the last time I posted a Bill Everett story?! This mean spirited lycan tale originally appeared in the Jan '54 issue of Menace #9, in color, and titled "The Fangs of the Wolf", and now here retitled years later, color sucked out, and reprinted in the August '73 issue of Vampire Tales #1. Yipe! 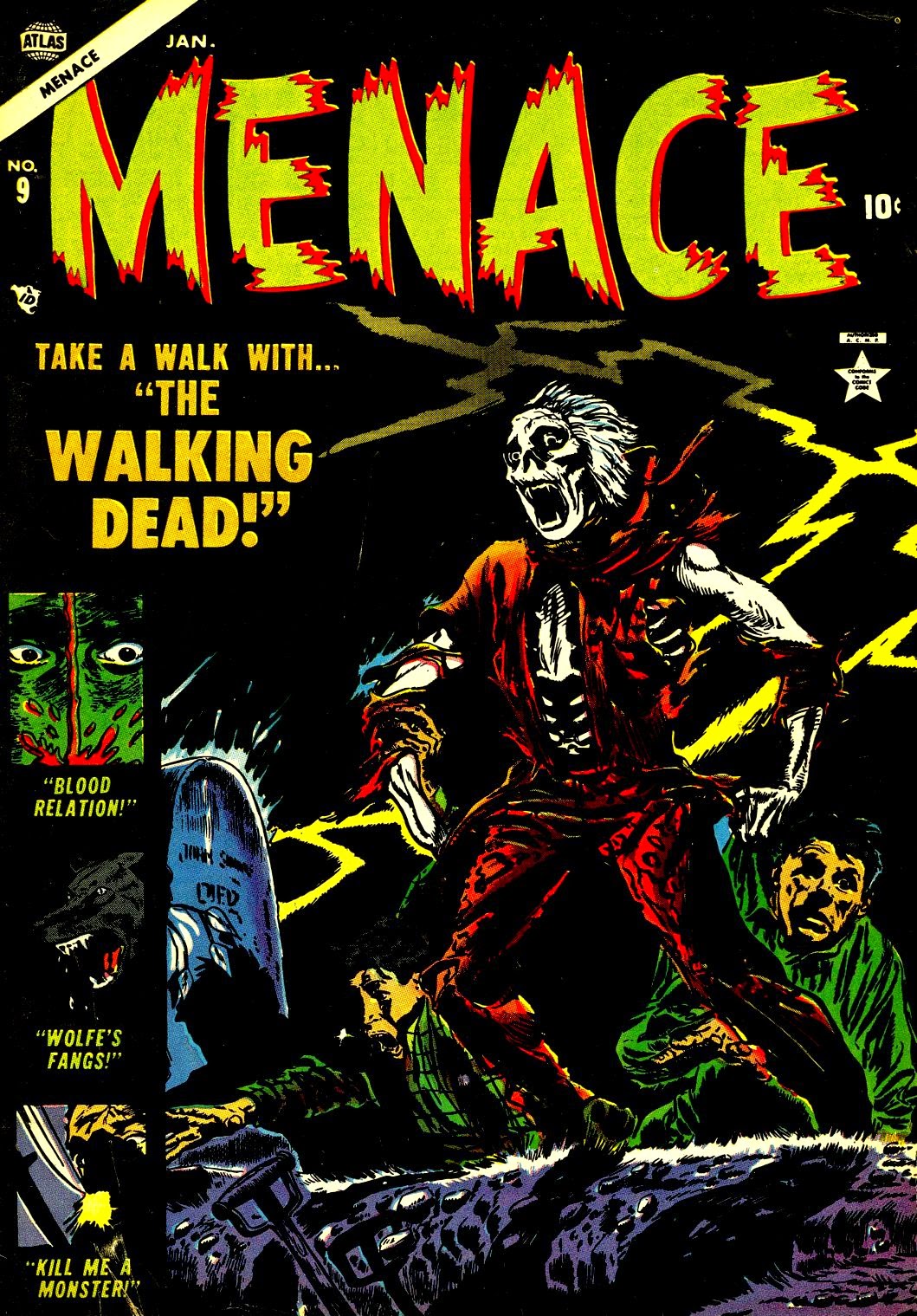 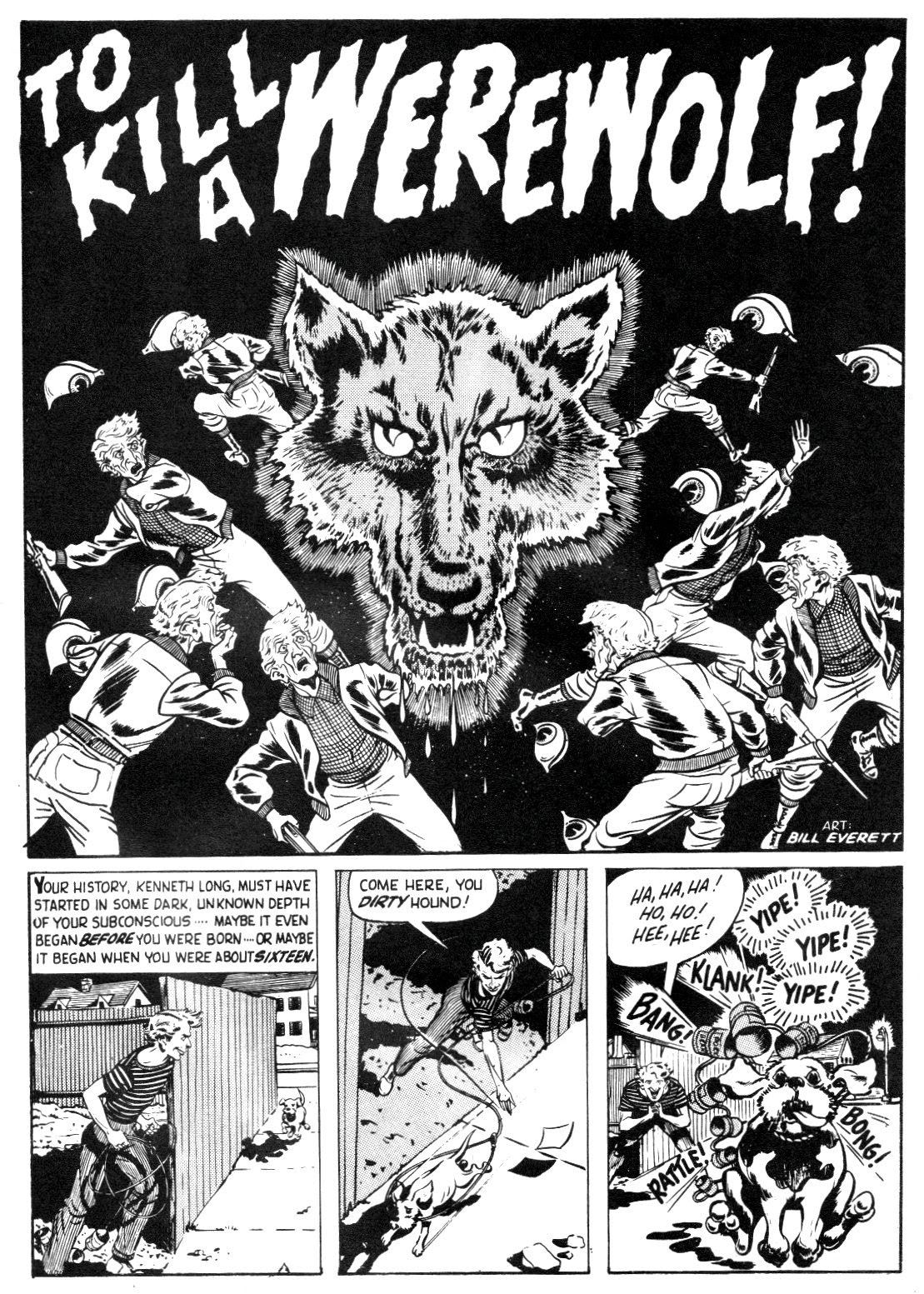 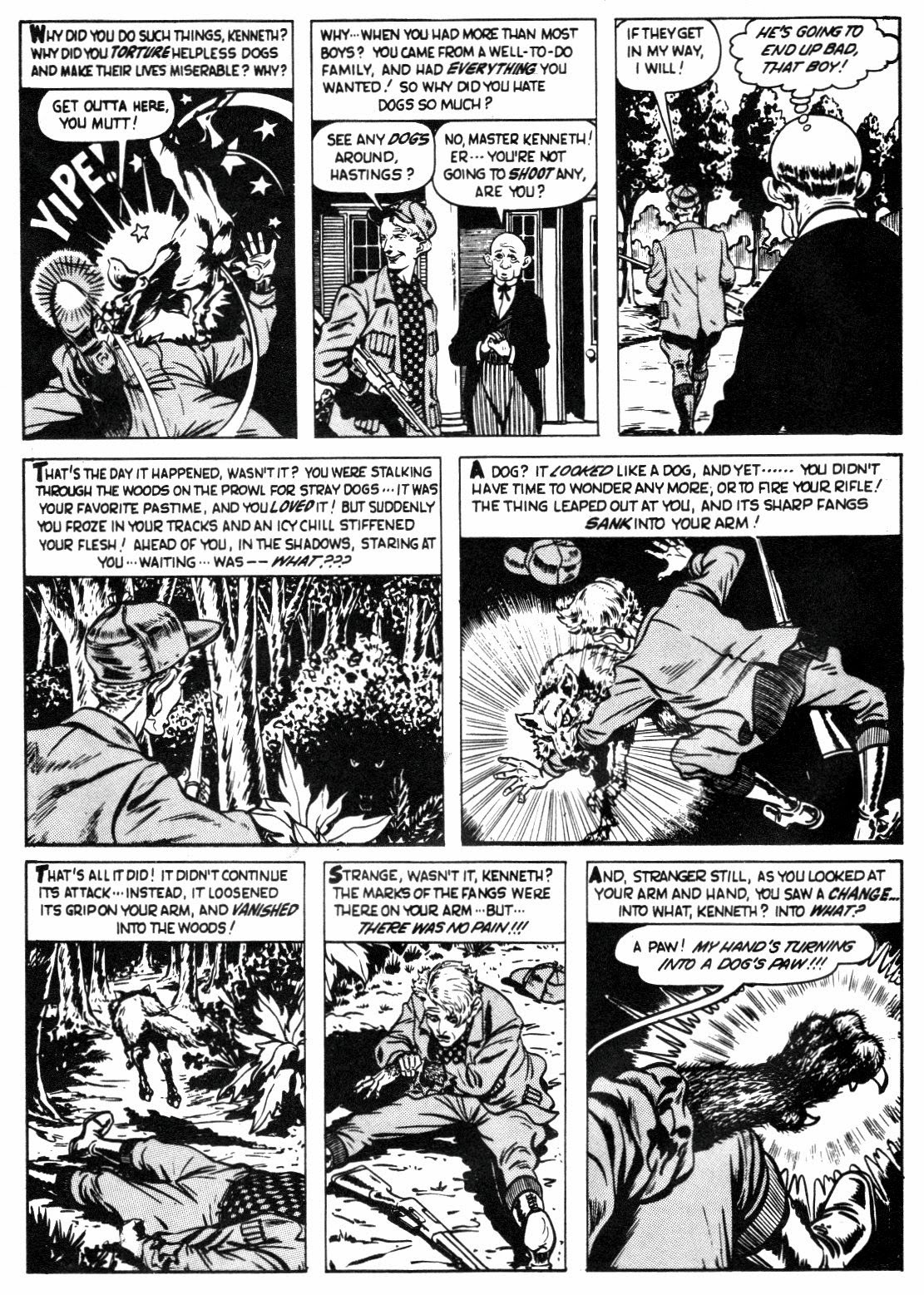 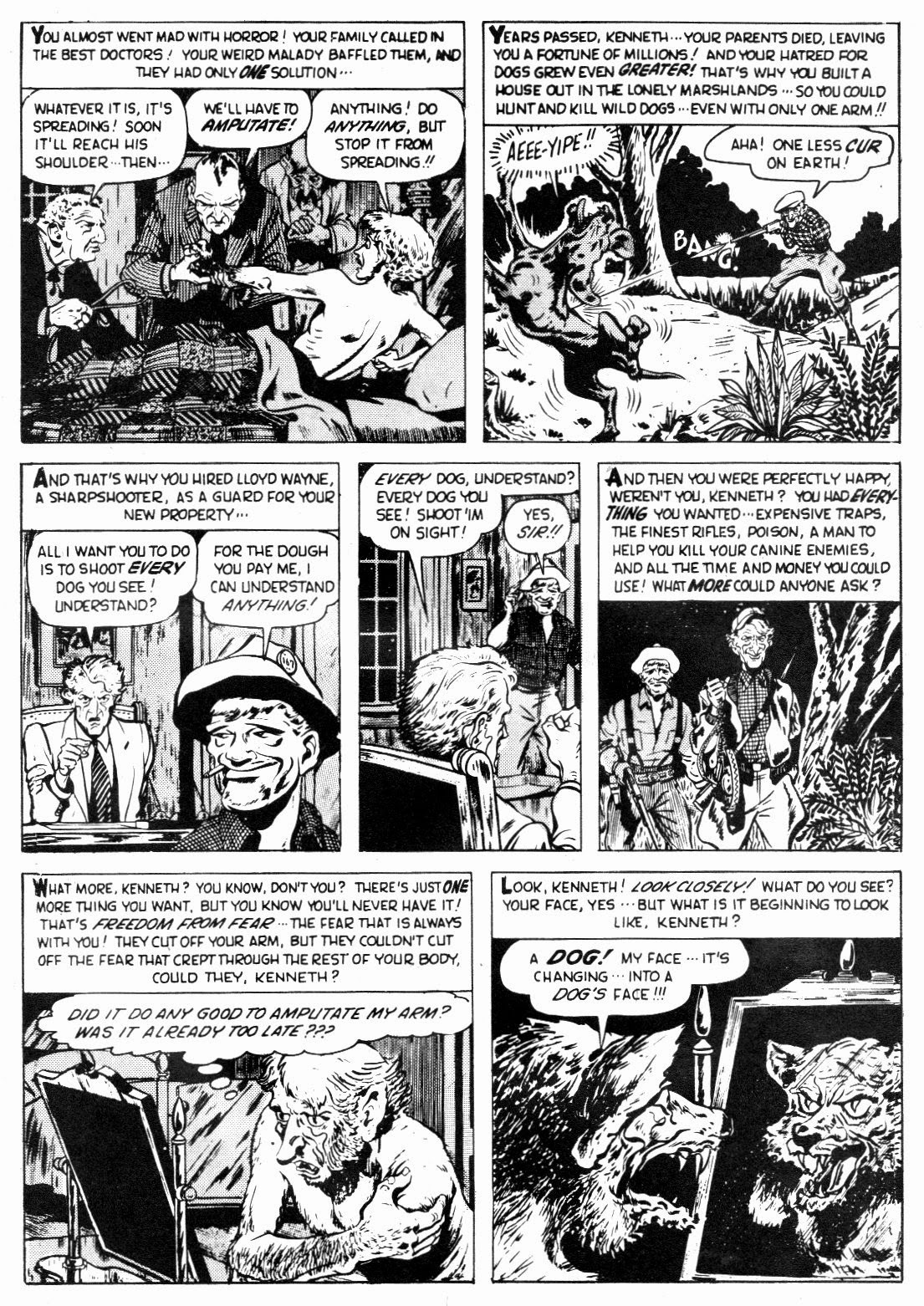 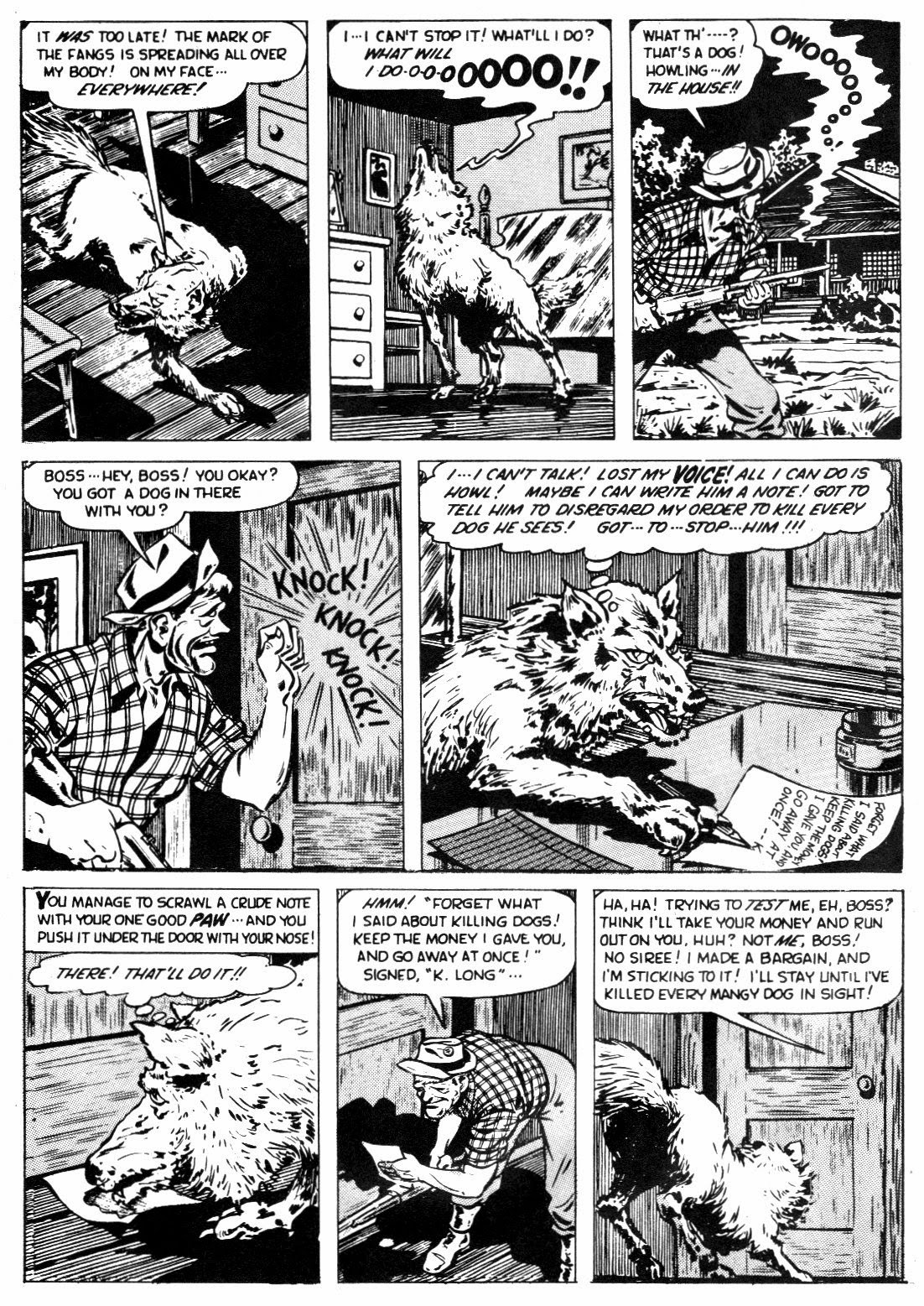 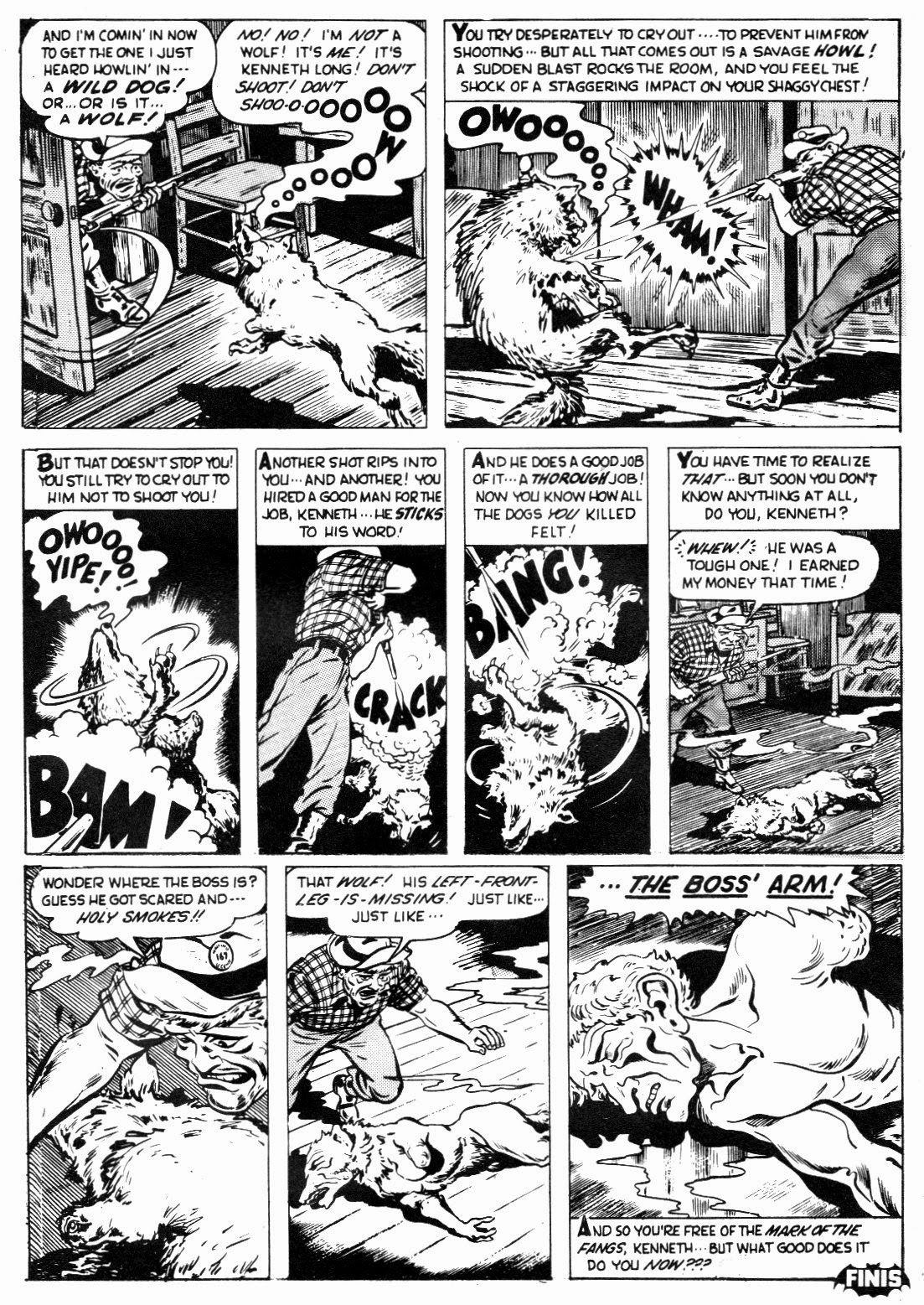 Everett does a great job, as always, on this one, and it's nice seeing the original art (I suspect this is done from the original art instead of an attempted de-coloring, as the tones are new, but I'll need to check my masterworks addition.)

The story has more holes than a werewolf could chew through, but that doesn't matter because it works as a Stardust the Space Wizard type karma story.

The subtle transformation panel at the very end is nice, and Everett's work on the fur is fantastic.

I suspect this was printed from color leached stats of printed materials. I think some of the color has been preserved here in disguise as black and white half-tone screening--look at the pants in the top right panel of page five, that's a moire pattern, from multiple overlapped color screens (the pants were purple) not a standard zip-a-tone pattern. As a matter of fact, I'm pretty sure the Masterworks collections are all color leached masters that have been recolored in modern continuous tones. I do not think the survivorship curve of original pages from the era is terribly optimistic.

I do think the leaching has been done very well here, though; and, perhaps more importantly, the art is a perfect candidate--dark, solidly marked figures, with any tiny or very scratchy line work relegated to the background. I do think it maybe looks just as good in this black and white version as the original printing did, owing to pretty strong forms and compositions here and pretty lackluster color there. I think I prefer this version over the original, which is out of character for me.

Hell, I'd do an Everett Everyday if I had the ability! :)

I always enjoy an Everett story because he's got such a strong style, and this is no exception. The basics of this classic tale goes way back to Roman times, but I like this spin on it. Thanks for posting!

"Perhaps he should have continued writing after Lloyd got into the room to clue him in that something remarkable was going on.
Although it might not have mattered..."

It occurred to me when I read that comment, that SHOWING that he could write didn't work for Taylor in PLANET OF THE APES (until he actually wrote something), so, yes, who knows whether simply TRYING in front of Lloyd would have done Kenneth any good.

Trevor Markwart is right about how far back the idea goes (even though this is a very strange spin on it). One of the great examples is the "Actaeon" story in mythology.

We still have our copy of this from childhood.... Thanks for posting good Sir...