Change Partners and Die With Me!

"No one wants to be alone on New Years Eve..." and so begins this eerie tale by Joe Kubert (School of Cartoon Art) from Scholastic Magazine's WEIRD WORLDS #4 from 1980-- a tale that feels a lot like a leftover precode classic if you ask me. Weird Worlds was sort of like Dynamite Magazine in that the content was aimed more at kids, but unlike that series, WW contained articles of a darker, sometimes more science fictiony nature. This issue for example features all kinds of fun junk about zombie movies, UFOs, short fiction stories from John Collier and Henry Slesar, hilarious epitaphs and horror jokes, assorted weird 'n true facts, movie previews (Saturn 3 in this ish) and even lends an ear to "weird" music like Alice Cooper, Devo, and Iggy Pop. I believe WW only lasted 8 issues and fyi: one or two of the other issues I have contain scary comic stories by Steven Bissette. 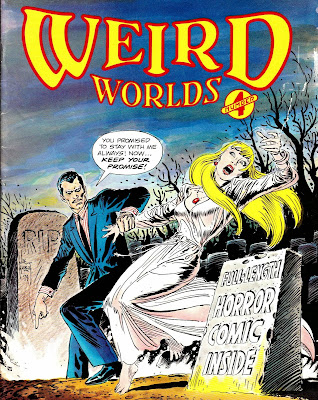 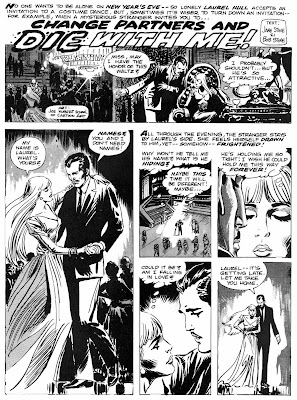 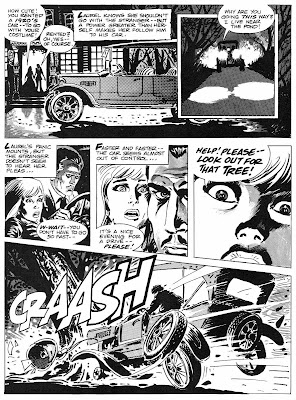 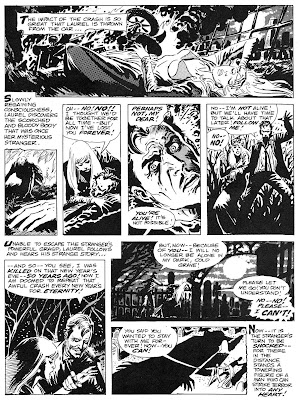 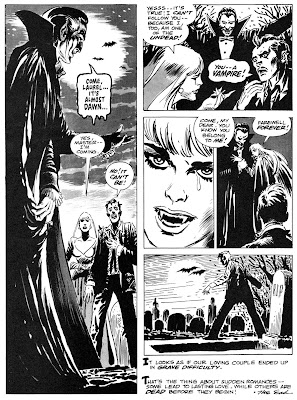 I was hoping to get to see the "shape-shifting" Slime story from Nightmare # 5... have not seen it in 40 years and still somewhat remember it ...

Scroll back a half dozen posts, Doc... Slime World was the first story I posted from Nightmare #5

That's pretty great and I don't think I have seen it before!! Ending the year in great form, Kars!!! The happiest of 2014s to you!

For those who don't know or didn't guess: authors Jane and Bob Stine would be Mr. and Mrs. R.L. Stine--yes, that R.L. Stine.

As always, thank you for posting these, Karswell!

I remember this tale though I couldn't remember who published it. A nice twist ending that would have fit in with Alfred Hitchcock presents.

Happy new year Karswell and all followers of THOIA.

May the new year 2014 be great for all of us and may the only horror in our lives come from pre code comics!

You know, this is going to be my first rant in a while, but I don't get some of these artist schools. Why turn out other artists with exactly the same style?

Now, certainly, lots of great artists came up through schools like Joe's and became great in their own right, with their own style, but this, by "the school" (I suspect one person drew all the figures, the art is too close otherwise) seems kind of ... unnecessary. It's basically a clone of Kubert.

That said, if you are going to lift, you could do worse than Kubert, and it's certainly really strong art.

The story is all sorts of silly. Look, either announce the components of the twist before the twist. No "as it turns out." Come on people, cut that out!

Happy New Year, Kars, and here's to another great year of your awesome posts. Sometimes I complain, but it's out of love :)

Our complaints should be about the artists shortcomings, not about Karswell and the great art he finds.

We sometimes forget this is a labor of love, we should be grateful for the hard work Karswell does to bring us this artwork that would undoubtedly remain obscure or unknown to us all if not for his efforts. Hats off to you Kars for his hard work and untiring spirit!

While the artists may from time to time fall short of our expectations, we need to remember that they were not all equal or as good as our personal greats, many did their level best to present stories for us to enjoy and critique so we should at least give them a nod for doing their best. While a master of pen and ink could have turned out a better illustrated tale, we should remember that not all publishers had access to the best of the best for whatever reason (The best of the best had a previous agreement with another publisher, the need to keep costs down/cheap outfits, a desire to give new talent a chance to break into the business, etc.)

Sometimes we need to just enjoy a tale as it is presented even if the art is less then stellar, better a story with the illustrator giving the old college try than no story at all.

I love all these stories even if the art could have been better, but truth be told all these illustrators are better than I myself could have done, so I willingly cut them some slack in the illustration department.

Happy New Year everyone, and thanks for the wishes and as usual the comments too! Lots of stuff lined up here for 2014, stay tombed...

The artist credit confuses me. Is this done by Joe Kubert or someone from his school?