Sometimes the monsters that temporarily roam this planet aren't summoned from fiery bottomless pits, or created in shadowy cold laboratories. "Mad-Dog" Vincent Coll was a TRUE horror story, a brutal Irish mob hitman in early 20th-century New York City who gained notoriety for the accidental killing of a young child during a mob kidnap attempt. His short and violent life has been examined in popular movies and tv shows (check the wikipedia link above for more info on this too) as well as in this nicely done back-up feature from Avon Comics' 1951 one-shot issue of Hooded Menace #1. It's not a "horror" story of course, but does contain some supremely bloody, and horrifying moments... and it's another good example of the 'ol ultra violence displayed in pre-code crime comics. 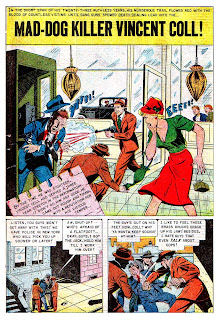 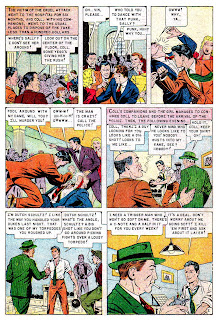 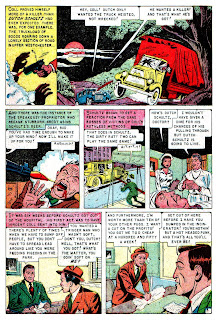 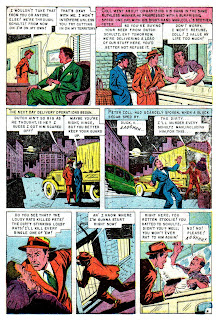 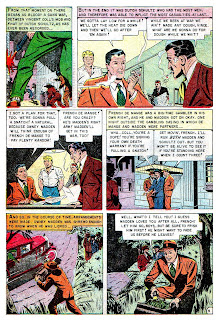 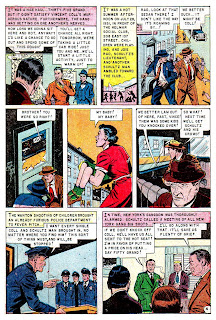 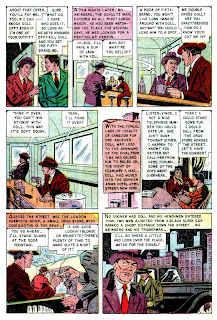 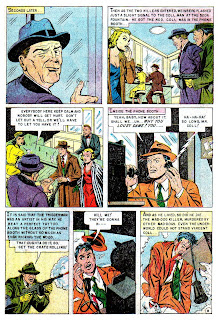 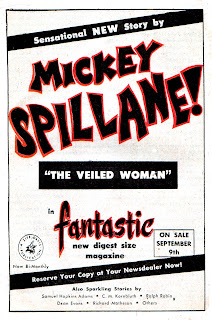 Karswell: Brutal, Bloody (I'm not sure which panel I like best: the guy getting shot in the mouth or Shultz getting his spine blown out his back); and fantastic! -- Mykal

I WAS WONDERING WHEN YOU WOULD POST MORE PRECODE CRIME STUFF. THIS IS A FASCINATING STORY FOR SURE.SOME GANGSTERS ARE SCARIER THAN SUPERNATURAL SPOOKS FOR SURE

whew, this stuff maintains the tension, that's for sure! it'd be great if you could start up another blog dedicated to this stuff!...

>it'd be great if you could start up another blog dedicated to this stuff!...

Are you talking to me or Mykal? haha

This kicked ass! Thanks Kars!

This one really pulls no punches, and the final panel is a killer.

So violent. I could almost feel the slugs ripping through the bartender when Coll does him in.

Always down for the precode crime, Karswell. Thanks as always!

I'm going to try and get back to more pre code crime tales at least once or twice a month, I also have a cool crime oriented "Flash Forward" planned for May that alot of you may not be familiar with.

Thanks for the comments, and the rest of April is packed with golden age horror so don't miss a single post!

I like this one a lot.
Not everybody may know Coll was a real man (1908-1932) and this story is true to what allegedly really happened.
Old Bo Weinberg was a real character, too.
Yes! Please! More like this! The true stories are the best.

Weinberg himself "mysteriously disappeared" after conspiring with Lucky Luciano to take over Schultz' outfit when Schultz was about to be tried for tax evasion and widely expected to be imprisoned. Schultz was, strangely enough, acquitted, and Weinberg "vanished" after walking out of a nightclub and never seen again. Schultz himself, of course, was famously shot along with his accountant and two other gangsters by Mafia Commission hitmen after he became a liability owing to his own uncontrollable violence. Not one of the people in this tale died of natural causes.

By the way, Coll and Schultz have a mention in Ogden Nash's "A Tale Of The Thirteenth Floor":

"Here's the bulging hip and the foam-flecked lip
Of the mad dog, Vincent Coll,
And over there that ill-met pair,
Becker and Rosenthal,
Here's Legs and Dutch and a dozen such
Of braggart bullies and brutes,
And each one bends 'neath the weight of friends
Who are wearing concrete suits."