Are you ready for torture? Quoting the Devil's Den content page for this Manny Stallman tale from the Dec. '53 issue of Black Cat Mystery #47, "...even the black cat writhes from the torture of TORTURE, trying to escape every pitfall of a beaten soul! You'll scream with the ending... the twist to end all twists!" Well, I guess that's for you to decide... 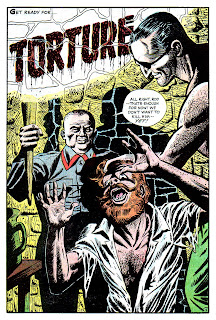 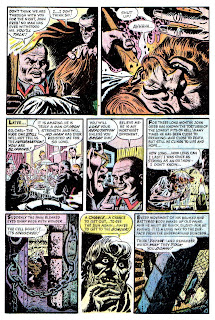 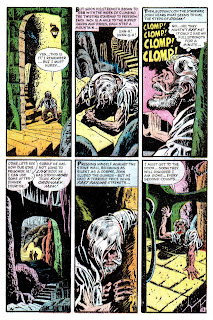 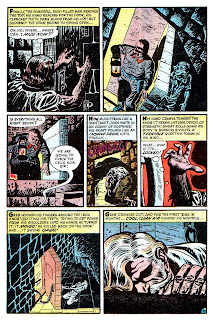 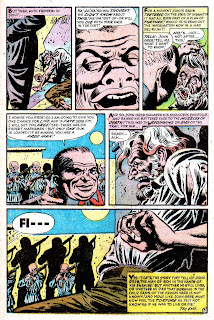 THOIA reader Drew Arrants wrote to me recently wondering if we've ever done a post on the censorship resulting from the original 1948 comics code put out by the Association of Comics Magazine Publishers. Says Drew, "Everybody thinks that old code was completely ineffectual (considering that its seal of approval appeared on the early EC horror comics!), but one major publisher (Lev Gleason) took it seriously and dramatically decreased the graphic gore in his comics." I asked Drew to go ahead and expand upon this and here we have a new feature--- the THOIA Reader Article Submission! Enjoy!

The ORIGINAL Comics Code by Drew Arrant
Astute readers of "pre-code" horror comics have noticed that some of those comics were in fact "coded," bearing a distinct seal of approval on the cover: a small white rectangle containing the words "AUTHORIZED A.C.M.P." above a larger white star with the phrase "CONFORMS to the COMICS CODE." This was the seal of the Association of Comic Magazine Publishers (ACMP), whose "publishing code" was the direct predecessor to the infamous Comic Code Authority (CCA) of 1954. This earlier code is rarely discussed in comic book histories except to mock its ineffectiveness, so here’s a brief account.
In 1948, in response to an already intense public backlash, several major comic book publishers formed the ACMP as a trade group which drafted a list of standards (show respect for the law, no "sexy, wanton" material, no sadistic torture, etc.) that were virtually identical to the later CCA restrictions. Participating publishers were required to submit their comics to a review board. Among the founding members were Bill Gaines (EC Comics), Lev Gleason (already notorious for his "Crime Does Not Pay" series), and the publisher of Timely (later Atlas / Marvel). A few other publishers also signed on, but most (DC, Dell, Harvey, Fawcett, Avon, et al.) declined to join.

Did the code have any effect at all? Here’s how EC and Atlas comics interpreted the "no torture" restriction. 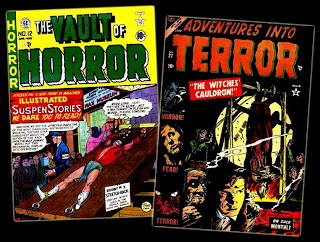 Apparently the only publisher who took the ACMP code seriously was Lev Gleason. Prior to 1948, his crime-related comics were among the most graphically gory on the market, routinely displaying a grotesque amount of blood on the covers and internal pages. (In the panel insert below from "Boy Comics" #10, June 1943, the recurring villain "Iron Jaw" has bitten two teenage boys to death after they saved his life.) 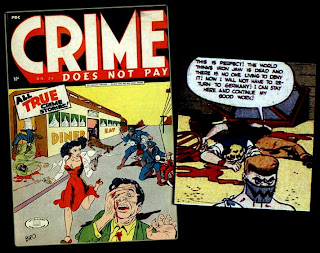 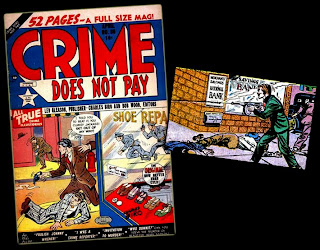 By 1950, even the ACMP’s director acknowledged that "The association...is out of business, and so is the code." The review boards ended that year, and Bill Gaines formally withdrew from the ACMP. However, he continued to post the seal of approval on EC’s (no longer reviewed) horror and crime comics until early 1952. Lev Gleason kept the seal on "Crime Does Not Pay" until the end of 1954 and never resumed using bloody graphics, perhaps because he didn’t need the gore to be competitive. Atlas (which had a habit of intermittently leaving the seal off its covers, and sometimes placed it in odd locations on the bottom of the cover) displayed the ACMP seal as late as the January 1955 issue of "Journey into Mystery #21," finally removing it just in time for the arrival of the Comics Code Authority. "Crime Does Not Pay" lasted five issues with the CCA seal on its cover. ---Drew

I read this in high school nearly twenty years ago.

Karswell: What a beautiful and brutal story. The most terrifying aspect is the way the grand inquisitor is on a first name basis with the grinning sadist/torturer in the first panel: "That's enough, Rod." Lord, the mind reels at the back-story for these two. And what magnificent art. Enjoyable article by Drew as well. -- Mykal

LOVE THE ART ON THIS ONE, AND THE ENDING IS PRETTY FUNNY.
COOL ARTICLE ON THE ACMP TOO. I ALWAYS WONDERED WHAT THAT STUFF MEANT ON MY COMIC COVERS.

Great article! This is my favorite new thing I learned today. Having occasional comics-related article submissions is an excellent idea. So I hope to learn more in this sort of way on upcoming days, too.

>I read this in high school nearly twenty years ago.

Thanks for sharing Todd.

Thanks Mykal, hope to have more THOIA reader submissions for future posts. Seriously, if anyone has anything different and interesting (though relative to comics) to talk about here just let me know.

You mean even more than usual Prof?

>I ALWAYS WONDERED WHAT THAT STUFF MEANT ON MY COMIC COVERS.

>Having occasional comics-related article submissions is an excellent idea.

In keeping with what we do best around here at THOIA, it's always great to expand a bit and see other aspects of comics that we tend to overlook or ignore. I'd love to hear more insider bits on publishers and artists, script writers, etc. If you know about anything we have not touched on then spill it to us. Thanks for the comments, and another round of applause to Drew for the article.

I've also read this story before (the version Todd pointed out, but mine was in a collection of Lovecraft's favorite horror tales), so it was fun to see the comic version (with no credit to the author, of course).

I also join the others here in appreciation to the cool article on the Comics Code. Great work Drew!

And now I'm hoping my hangover subsides before I head off to work!

I love a full page splash and this one is no exception! Neat story, and different.