I’m giving away an extra copy of the August 1954 issue of Tales of Horror #12. This copy isn’t in the greatest shape but it is complete, and it’s 100% FREE. Let’s call it a G – VG. So here’s the deal: below are 6 random screen captures from some 70’s horror films, whoever correctly names / identifies the most films (by the number in the bottom left-hand corner of each) wins, or the first person to name them ALL correctly wins. Enter as many times as you like, you can change your answers, use life-lines, wild guesses, whatever it takes. 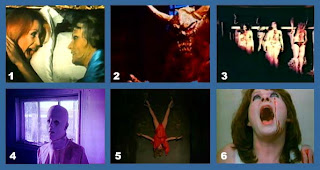 FYI: since so many of you post anonymously all entries should include a name and an email address (you don’t want someone else taking credit for your impeccable film knowledge!) You may also email your answers here: karswell@hotmail.com The winner will be announced on February 1st. Good luck!

***CLUES***
#1 is a Spain / Italy production
#2 stars a Frank Zappa look-a-like
#3 the director died in a helicopter crash
#4 stars a famous male actor with a woman’s first name
#5 was made for TV
#6 was originally rated X in the UK
Posted by Mr. Karswell at Wednesday, January 30, 2008

NONE OF THEM LOOK FAMILIAR TO ME, MAYBE #4 IF ANY, BUT I HAVE NO CLUE ON THE OTHERS.

Is #4 from Blue Sunshine? I never saw the movie but it looks like the poster. I think #5 is from a Hammer movie that I can't remember.

Not Blue Sunshine, and not a Hammer film. And to the guy who emailed me at hotmail #2 is not a live shot of GWAR.

Keep trying... I've sort of realized that this is probably a harder contest than I originally thought.

Probably obvious but #3 is from Three On a Meathook.

I'm embarrassed to say that these totally have me stumped. I feel like I should know these. The guy in #4 looks like someone who tried to touch me in the restroom at the Chesapeake House reststop off of I95.

It could have been, I had way too much blood in my eyes that night to see very much.

Nope... close, but no cigar of horror.

Is that Erika Blanc in #1, or Edwige Fenech in #6? Trying to narrow this down, damn this is tough contest!

Double no. Although you might be in the correct old world country for one of them. Getting warmer...

>damn this is tough contest!

I imagine it is and I apologize. The next contest will be much easier, I promise!

A few shots in the dark

1) Night of the Devils

3) Three On a Meathook

3 On A Meathook was definitely the giveaway answer, everyone has gotten that correct. But only one person so far has answered any of the others correctly.

Everyone keep trying though, less than hour to go!