For the next few days I’ll be posting pre-code stories that have a peculiar similarity to certain popular TV episodes and or films that came decade/s later. Today’s 1952 comic story for example was resurrected and modified 8 years later as The Hitch-hiker episode from The Twilight Zone (Season 1 Episode 16) and first aired Jan 22nd, 1960. Fast forward another two decades and here comes another somewhat altered variant as a segment in Creepshow 2, also called The Hitch-hiker. (“Thanks for the ride lady!”) Which one is best? Are there other pre-code versions of this tale? Let me know. 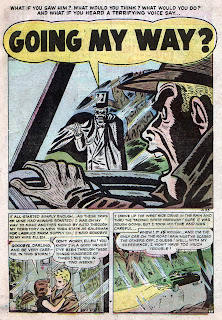 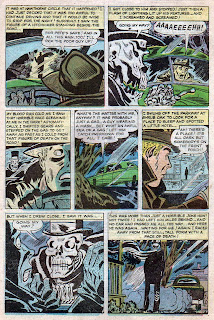 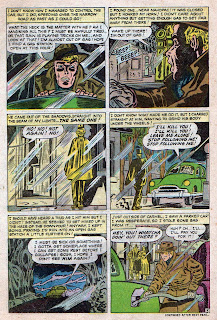 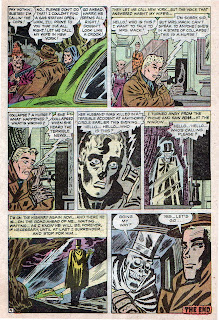 The Twilight Zone version was an adaptation of Lucille Fletcher's radio play of the same name. It was originally broadcast in 1941 on Mercury Theater and again on September 2, 1942 on Suspense, both starring Orson Welles.
The Suspense version was one of the classics of that series and can be found on the web (well worth checking out for PCH fans, along with some other Suspense classics like House in Cypress Canyon). Fletcher also wrote the classic Sorry, Wrong Number script.

I had a feeling someone was going to point out that these were not originally scripted comicbook stories (and somehow I just knew it was going to be you Anti, ha!) but yes, obviously and most likely swiped from earlier fiction stories or radio plays. I should have posted the disclaimer in the intro after all... and this goes for tomorrow's post as well as the Wednesday post. Thanks.

I TOTALLY REMEMBER THIS TWILIGHT ZONE EPISODE, SCARED ME TO DEATH AS A KID......BUT IT HAD A WOMAN DRIVER INSTEAD.

AND ITS A SORT OF A GIVEN THAT THIS STORY DIDN'T FIRST APPEAR IN A COMIC BOOK, WITH OR WIHTOUT A DISCLAIMER I KNEW WHAT KARSWELL MEANT

killer post! is this really krigstein art though?? atlas link has it listed in brackets, whats that mean? neat idea for a theme too and looking forward to more of these!

A while back i pointed out that "Ghouls(Horror)in the Graveyard" was by Krigstein,this was VERY early in his career,and he drew occasionally in that style,here he seems to be imitating Kurtzman(Harvey DID work for Atlas briefly,but i doubt this is by him).for anyone who wants to see a role-reversal/prototype of this story,see Amelia B. Edward's"The Phantom Coach".

The full story can be found and read right here:

Wow, tremendous rip-off of the Lucille Fletcher story, right down to the phone call scene! It's always interesting to unearth tales such as these (another goodie is "You Can't Escape" from Adventures into Terror#6, stolen from Frederic Brown's "Don't Look Behind You").