My buddy Max was recently going through THOIA's August 2017 archive and noticed the trio of posts about swiped pre-code artwork re-used on mid century spook show posters (check the archive HERE if you missed it.) Finding it apparently "very interesting", even "amusing", he wrote to me asking my opinion on another one he believes that he's spotted: compare the werewolf head from the cover of the Jan - Feb 1952 issue of Forbidden Worlds #4, now singled-out and flipped horizontally for the "A Living Nightmare" spook show poster (see top right of the ad below:) 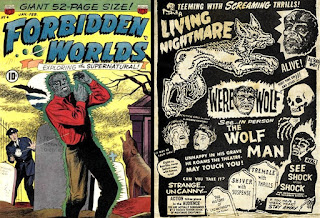 I suppose it could be, I mean it looks pretty close, but it definitely looks redrawn quite a bit as well. Not to mention, the original ACG werewolf is likely created from a Lon Chaney Jr. Wolf Man reference photo. What I do know for sure though is this: two of those bloody, severed lady heads in the spook show poster were absolutely lifted from the intense pulp illustration for Robert Bloch's "Head Man", originally featured in the May 1950 edition of Dime Mystery Stories! 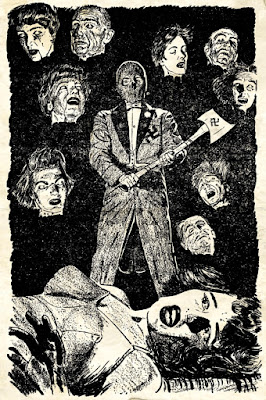 I'm on the fence about the werewolf, but great catch on the heads!

I’ve actually used that Head Man image on a couple of posters I’ve designed, so I know those heads like the back of my own head.