The Man Who Imagined a Monster!

Though clearly from the golden age of 1950's creepy creatures, this story feels very much like the stuff we'd see regularly a few decades later during the silver age. It's a terrifically tentacled monsterama from the January 1953 issue of Tales of Horror #4, --we liked it so much we put it in Haunted Horror #28 too! Interesting, Ditko-esque art by Ernest Schroeder. 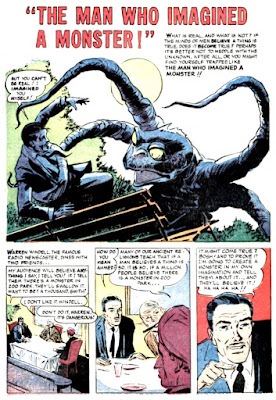 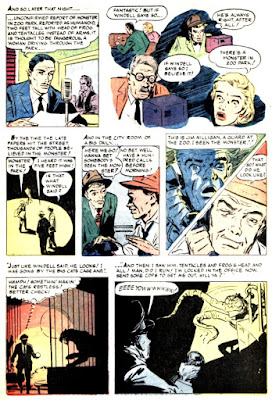 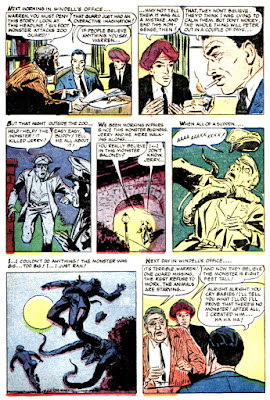 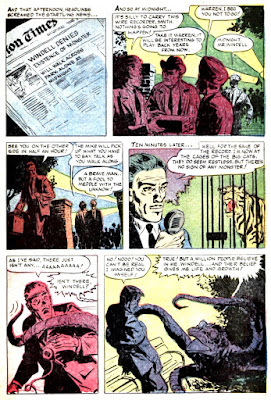 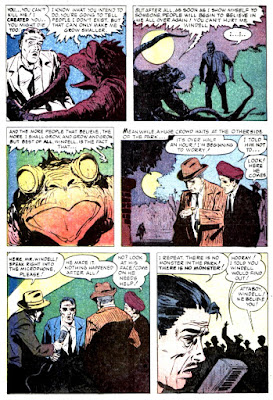 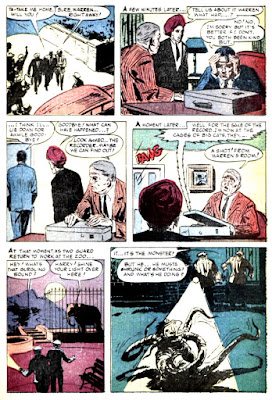 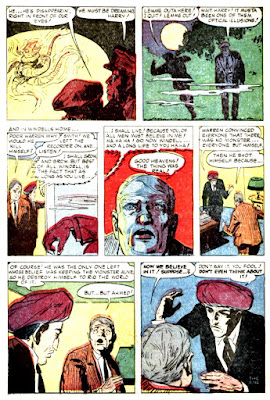 Email ThisBlogThis!Share to TwitterShare to FacebookShare to Pinterest
Labels: all part of the show, Ernie Schroeder, Haunted Horror, Tales of Horror, Toby/Minoan

Interesting. No kidding that it's very much like a post-code Atlas monster tale except they would have to have given it a name like Blurg so it can be Blurg Walks!

I love the design, the frog head, the tentacles, it would have been a great 50s b-movie monster. Of course, the idiotic thing opens its big mouth and just spills out how to defeat it!

The art is both good and ... weird. Some faces are kind of wacky, but the monster is always great. The coloring is pretty bland but OK.

I wonder about Ahmed. You don't normally see characters like that (unless they are cliches for some reason.) Were they going somewhere with that? Is there a specific regional legend? Or did the writer and/or artist just have a friend they were drawing?

Wow! a perfect treat! What Hallowe'en fun. Don't think about it. Thank you Mr.K. Loved this one. Go out and play with fire everybody. I promise you won't get burned. Ha Ha Ha Ha!

Following up on what Mestiere said concerning the tulpa, the idea was touched upon by Night Monster and Tale of terror posted back on this blog on Jan 15, 2013.

There was another tale similar in theme to 'The Man Who Imagined a Monster' titled 'The Devil's Creation' from Beware, Terror Tales #2 July 1952. I thought it was posted on THOIA but it was posted under The Charms of Charlton -
http://charm-of-charlton.de/stories/the-devils-creation-fawcett

I thought the same thing as Brian Barnes about Ahmed. Maybe a lot of characters like him in comics aren't SLURS, but they're not so often such "fleshed-out" characters either.

As always, it's nice to see Mestiere bring up "Fortean" subjects. I'm afraid The Mothman Prophecies is one of the few Keel books I've read, but I've always liked it.

Now that everybody's brought it up, Ahmed is a pretty interesting character. It slipped by me completely on first read (I was concentrating on all those strange, subtle purple shadows--just one of the visual touches here that seem anachronistic in a comic from the fifties). He is a little bit typical though, being the guy with an ancient mystic outlook that seems unlikely to incredulous modern eyes. While they do go a lot easier on the hokum here, and they do allow Ahmed to be at least as dimensional as any character in this story, he still plays the usual part: The other, whose custom allows him to believe in exotic cause and effect.

One more thing to consider concerning this story, the power of propaganda. On page two top right panel we see a small sampling of people who just accept the story as absolute fact instead of seeing if any other source of information confirms the monster story.
Sometimes we see only what we want to see, hear only what we want to hear and the facts get trampled on like a welcome mat.

Clever story. I often razz dumb ones, but this was thoughtful!