"Hack, Hack, Sweet Has-Been" or "What Ever Happened To Good Taste?"

Annnnnd here we go-- I promised you guys something different, and while I have delivered a few MAD Magazine posts in the past, I've yet to submit this kooky spoof that spearheads the Hollywood trend (at the time) of casting glamorous 1920's, 30's and 40's Golden Age actresses into B-horror film roles of the 50's and 60's. Bette Davis, Joan Crawford, Barbara Stanwick, the list goes on, and as film history has shown, while they aged gracefully and reached their own "golden years" in life, the youth obsessed film industry either turned their backs on them completely, or cast them in campy trash classics like Trog. Or, in the case of today's post, "Hush, Hush, Sweet Charlotte" meets "What Ever Happened To Baby Jane?" Some actresses actually prospered in this new age of horror cinema, while unfortunately, others did not. And while I'm not super fond of the stale arsenal of age jokes here that make fun of some of my all-time favorite leading ladies, I certainly do love the magnificent Mort Drucker artwork, as well as the very idea of all these wonderful women coming together for a murderous axe party in a dreary old house! Originally featured in the January 1966 issue of MAD #100, script by Larry Siegel. Enjoy, and we'll see you next month-- IN COLOR! 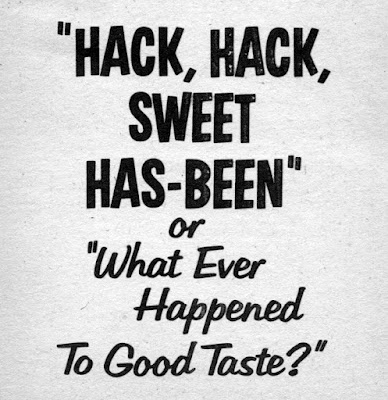 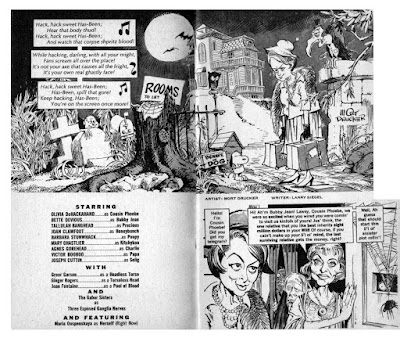 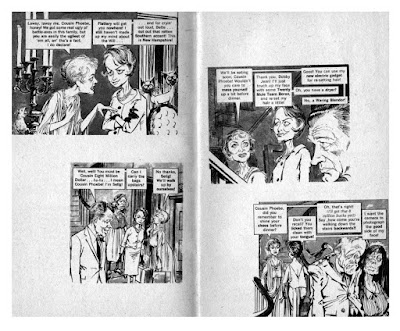 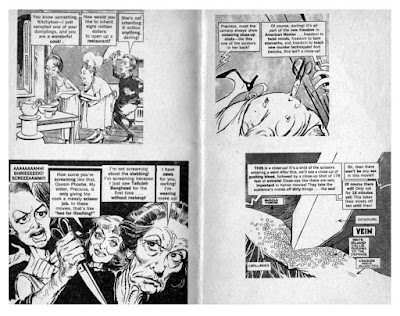 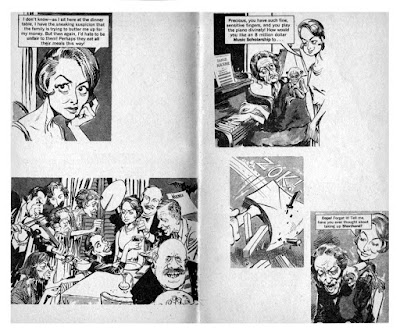 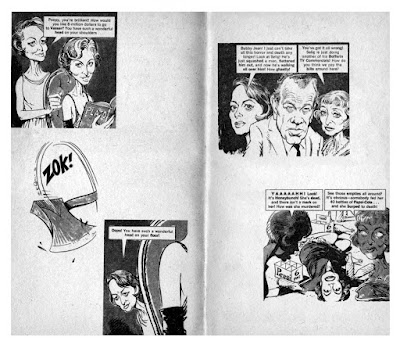 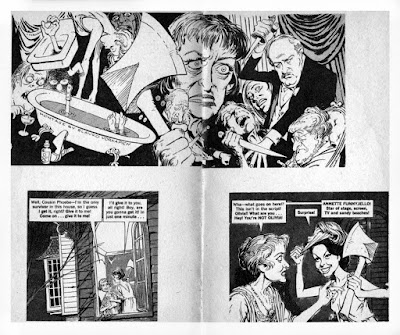 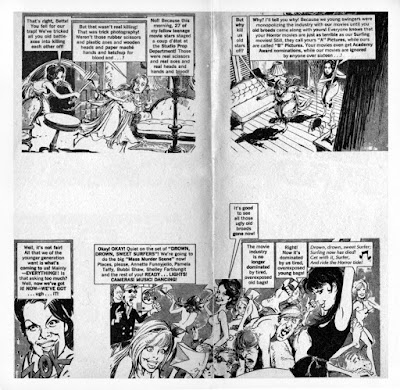 [An interesting aside: though I have as much power over this blog as Mr. Karswell, I cannot edit my own comments-- I don't expect or wish to edit any others, mind you, but I thought I might be able to alter my own.]

I do like the little "take that" at Joan Crawford's extensive involvement with/shilling for Pepsi Cola in her later years (she married the company president in 1955 and eventually joined the board of directors).

Amusing trivia: this mini-genre of older actresses in horror films got some amusing names-- "psycho-biddy", "Grand Dame Guignol" and the admittedly mean-spirited "hagsploitation". And it wasn't just Hollywood who got in on the game; Brithorror gaves us films like Whoever Slew Auntie Roo? (1971, with Shelly Winters) and Fanatic, aka Die! Die! My Darling (1965, Tallulah Bankhead).

Aw, the little oddities one learns when one prowls the stacks...

God I don't know what I like better, Psycho-Biddy or Hagsploitation! Lol

I sure don't want to be in the position of defending Joan Crawford, but I have to say that the filmmakers who took advantage of her persona and Bette Davis during their "desperate for a part so I'll do horror" later years, made some of the most memorable work of their careers with Psycho-biddy. THE NANNY with Davis is one of the best thrillers out of Hammer (topped only by PARANOIAC, imho). The showdown between them in WHATEVER HAPPENED TO BABY JANE? is so creepy and memorable that even now we're getting a "making of" movie with FEUD. And don't forget that Steven Spielberg's big break came directing Crawford in THE NIGHT GALLERY pilot.

A fun piece from MAD. Thanks for posting!

What do we call the trend of increasingly aged action stars, grampsploitation?

I love "Whatever Happened to Baby Jane." It's crass, it's exploitative, it's cheap, but has a real dark heart and the leads really work the material.

One thing I find interesting (and I remember reading this in a reprint somewhere, as I wasn't quite born yet when it came out) that I only noticed now -- it's very dismissive to gore in horror films, and it's basically using some of the same arguments that were used in the 50s against EC, who ran MAD! "Freedom to twist minds?" This is only about a decade removed, and Gaines and Al are still in charge! Bizarre!

In '66 Eva was just getting started in Green Acres and she was still fine, so I take offense that she was a has-been at that point :)

Man I love Mort Drucker. And I really want to see Drown, Drown Sweet Surfers, but I suspect it would have garnered less in the way of Oscar consideration than the original managed.

For the record, I love all the movies, and most of the stars, that are skewered here. And I think that Grand Dame Guignol is quite brilliant (though I think "Grandma Guignol" is rather nimbler, and seeing as how there's not much in the way of a Google hit for it, it's ripe for some horror host, rollergrrl, or macabre superhero team to adopt).

Good Drucker art. BTW, I have another request: "Genuine Alligator" from Mystery Tales #16, if one of the other bloggers doesn't have it posted.

And a very Happy Birthday to you, good Sir !!!

I haven't known this routine forever, but I've known it for quite some time due to back issues and Mad paperbacks and so on. Even though I also like the "hag horror" movies it's about, I have a lopsided attachment to the ending, since I've never stopped liking the Beach Movies and similar ones (right now I'm in the middle of a long wave of watching all the ones I own).

A little later they did a routine called "Mad Visits A Typical Beach Movie," and they got a fan letter from Bobbi Shaw (who of course appears here as "Bubbi Shaw").

Well, as I dig '60's horror AND the Beach Party romps...
Drucker's art here is fantastic.

Fun comments you guys, thanks for joining in and turning our horror ho-down into a beach blanket blood bath! ;) More on the way, and as mentioned-- a return to COLOR!