Here's another nicely illustrated Standard Comics spooker loaded with chills and atmosphere, originally presented in the August 1952 issue of Adventures into Darkness #5, which is, (for anyone wishing to complain about scans on a FREE blog), another issue that I temporarily do not own. So! --from the completely acceptable re-colored version via Eclipse Comics' great 80's Seduction of the Innocent series (issue #2), and featuring fantastic artwork signed by Ruben Moreira. 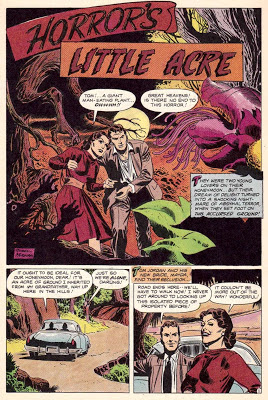 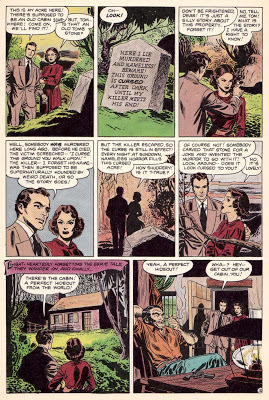 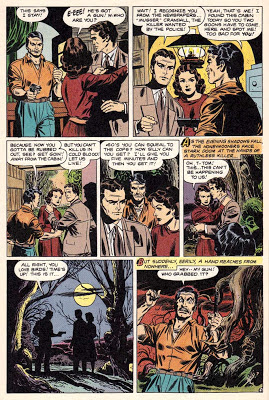 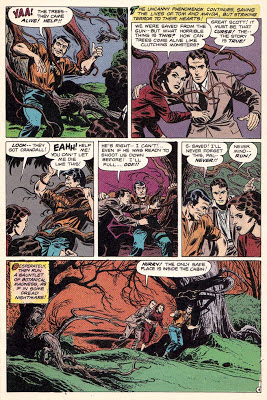 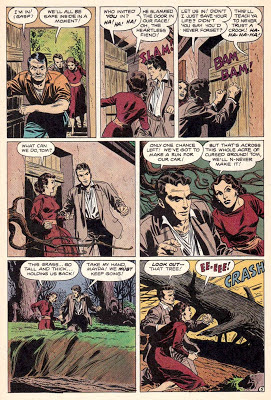 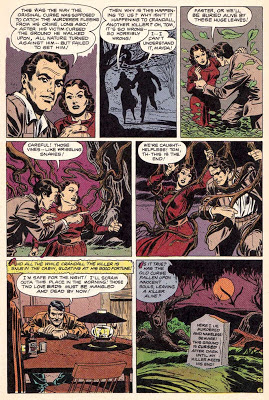 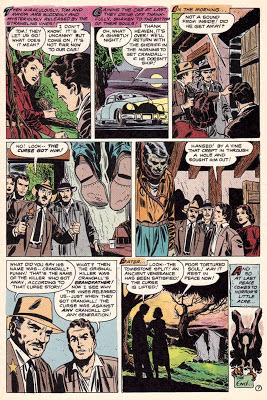 Wunderbar, wunderbar, wunderbar tale! There were several outstanding panels! One was Crandall's expression when the trees first grabbed him. That was priceless! Crandall...wadda schmuck! Another was "the gauntlet of botanical madness"-- I absolutely loved that one! Of course there was foxy Mayda--but the best was the firearm switch...either Crandall had two handguns or the artist forgot that Crandall first had a revolver and switched to a semiauto. I love this tale! Dulce et decorum est!

I drank a Coke and ate a Hershey bar while reading this... what a time machine!

I thought of "Evil Dead" as well.

Man, great story and well drawn. I totally dig the first three pages. The characters and the plot are all introduced really well here. Kind of a slow burn for a pre-code tale.

For the record, I don't feel like Spacelord was complaining. I feel like he was just being specific. That's one thing both comic book and archival nerds totally share. It's all a part of the conversation, right? I didn't notice anything with the previous reprint stories, which were much less flamboyant; but here I would have totally wondered what was up with the color. I thought it was great, by the way--especially for something recreated in the eighties (the first page, page three panel six, what excellent work). I've never been all that in love with modern age color, but this was quite nice. It still doesn't look particularly "pre-code" though. I'd totally love to see a comparison between the two some day. The mutation of these original stories as they've gotten reprinted though the years (like here, or like when Myron Fass tarted stuff up with extra gore and eyeballs) is a really interesting part of their story.

Anyway, these last group of posts have been totally excellent, and I feel like I've come away having learned something. Thanks!

Fine, no one was complaining, but quibbling or directing me to do something other than what I've already presented in a post is no longer accepted around here and these type comments will be deleted. I don't mean to sound like a nazi about any of this but posting these days is very time consuming for me and my schedule is extremely busy so what you see is what you get. If you don't like it fine, that's your opinion. But this is my blog and I'll do things my way. End of discussion.

I'm going to whine for a second on this one, after I say I loved the pacing and there's a lot to love in this tale.

That said, my least favorite EC artist was Johnny Craig, the reason being is I never like clean line art in horror stories. This one, for me, suffers for the same reason. It *can* work in certain instances, but in this one, I don't think it does. It removes the grit and other-worldliness. IMHO. Your mileage my vary! It could just as well be some story about a super-villain who controls plants in the 60s.

That said, what's up with Page 1, Panel 3? Her expression is like she tricked him into marriage and stole all his money, and now she's leaving him in the forest of death!

For those who just don't grasp the fact that this is a free site, no membership required, no group to join and no fee to pay to read these stories, but Still insist on bellyaching because it isn't 100 % to their liking, the following slogan is apprpriate-
"Put on your big girl panties and deal with it!"

Gawd, some out their on the world wide web need to either learn some manners and common courtesy or start their own dang blog and post whatever they want as they see fit. After a couple of months they will see just how much fun blogging horror comics can be.
Rant off

You mean I signed up for the Sons of Black Mass Merry Marching Society for nothing? Yeesh! :)

Let me second this. This blog has been a great source of enjoyment for me for years now, and hopefully years to come. Blogging can be thankless, and Karswell delivers every time.

And I do think the comment section is also a lot of fun ... being overly analytical about stuff that most people thought was disposal and forgotten makes for a great discussion.

So, thank you Karswell! And for Haunted Horror, as well. And Sons of Black Mass. And if I was ever near your house I'm sure your BBQ is great too :)

I second the Great Brian on this. This time machine has been such a great relief from the sturm und drang of survival's necessary requisites for years that I would never trade.

I love this site and its stories have also been an incredible source of therapy for my wife of (come next Sunday) 40 years who suffered a near-fatal stroke in 2007.

There are deep lessons in the psychology of these tales that few ever notice. The production minutiae such as panel shading and coloration are irrelevant, but the common thread of tough people getting through tough times never becomes dated.

Perhaps I see too much in things, but to the great SB the Kars man and my colleagues here, I thank one and all. And I will go along with everything but the barbecue (unless it's BBQ chicken--which I love!).