Larry "The Lost Skeleton of Cadavra" Blamire recently wrote in requesting Bob Powell's classic "Colorama" tale from the August 1953 issue of Black Cat Mystery #45 ...so, being a huge fan of Larry's fantastic output of fine film, I of course said "yes, sir!" And despite the fact that this tale has been reprinted countless times over the years in multiple forms and easy to find versions, I (in fact) did not actually have a copy of it-- argh! Soooo, once again I turn my blog over to the terrifying scans of Mr. Brian Hirsch, the one man on the planet who undoubtably owns every comic book ever made.

PLEASE NOTE: These scans are actually the later reprint and slightly modified version of this story from the January 1958 issue of Black Cat Mystery #61. (see comments) 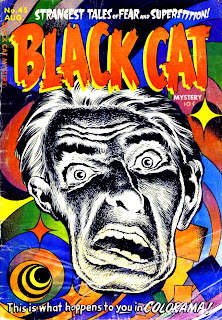 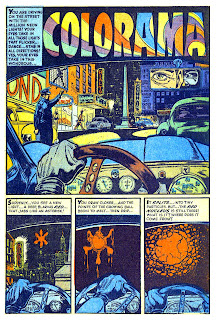 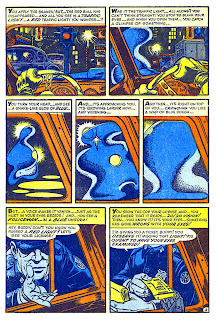 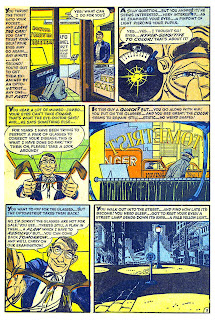 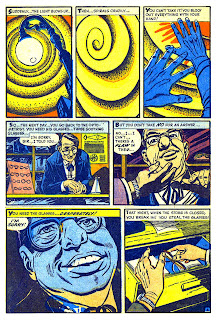 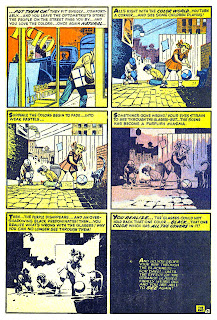 Well this was pretty much awesome all the way through. I really sort of dig how nothing all that bad happens. Oh sure, it's written all telenovela--"then you turn the corner and look into a window! The inside of the place is inviting!"--but where the usual overwrought set up ("...so you have to kill the optometrist!") and the usual horrific twist ("...your hysterical laughter is louder than the feeding aliens because your realization has driven you insane! ALL YOU HAD TO DO WAS TAKE THE GLASSES BACK OFF!") are usually found, well, things turn out not all that bad. I was totally taken by surprise.

But a tiny note about the last page, panel four: "miasma" means "toxic stink" and I think the panel is funnier read like that.

Thanks you, Mr. Blamire, for requesting--and both Messrs. Hirsch and Karswell for supplying--this really unique story.

Of course, the ""one color that has all the others in it" is WHITE. (Black is the absence of all color.)

Not that logic matters in a horror story...

I had this one in a different collection, but I can't remember what. I read the whole volume to shreds, though. I hadn't thought about it in years, but I knew it as soon as I saw that first whacked out panel.

Drew: well, it's not completely illogical. It's just the difference between reflected and refracted light--the spectrum vs. the color wheel. You have an excellent point, of course, because the eye perceives the environment in RGB, so black is, indeed, the absence of color. But they have a pretty good point in that, since the magazine was produced with primary colors red, blue, and yellow (what has now been refined to CMYK), then black is the darkest combination of the all the primary and secondary colors in the palette.

I like sticking to their assertion better because it breaks the forth wall--"...suddenly you realize you are just a character in a COMIC BOOK!"

This is very cool! I miss reading traditional style comics.

I love the ending. I love the whole thing, really, but the fact some stock ending is not tacked onto the end to make it zesty is really a breath of fresh air.

"Lantern Gospel" by The World Column seems a fitting soundtrack.

1953? man were those guys taking acid?? must've been from the gov't labs. maybe they were taking the deadly reefer. Really great tuff. makes me want to go lick a toad!

This is actually the version of Colorama that was reprinted post-code. In the original, rather than just stealing the glasses he strangles the man who refuses to give them to him (That's why he looks so weird on the second-to-last page... originally that was a picture of him being strangled). The ending text was also added in this version. Originally it was implied the main character went permanently blind.

well then, i believe i would have liked the pre-code version better. the ending printed here may be atypical but it's a bit of a letdown...

No wonder this was such a surprise. Oh, well. Thanks, Ben! Better to have my history straight.

For me it was scary in the sense that I think that's what it would be like to have schizophrenia onset. I have a mood disorder but have never been psychotic except for when doctors make me that way by giving me some pill that effs with my brain--ha!

I don't understand how this is the "post code reprint" when Brian sent me scans from the original Black Cat Mystery issue that it first appeared in???

According to this link http://www.collect.com/Categories/Article/Comics/ComicsCodeB_110909/L0

the article's author, Maggie Thompson, states, "when Harvey reprinted the Bob Powell classic in Black Cat Mystic #62 (Jan 58), it included an addendum set in reverse type in the middle of the all-black final panel: 'And so, you grope your way through the blackness -- for days! … Until the effect of the strange glasses finally wears off and you are able to see again!'”

No mention of the strangulation scene, so I don't know about that. (But that would be more typical of the non-subtle pre-code Harvey approach than the strange "I'm sorry" panel in the post-code reprint.)

I wrote to Brian about this mix-up and he wrote back saying that he now sees that his copy is indeed actually the later reprint version, but for some reason it had the #45 cover... all apologies, if anyone has scans of the original pre-code version that they'd care to submit (please no scans from the recent book collection editions) let me know.

The book "Four Color Fear" (which I count as "The Horrors of It All that you can take to the bathroom") does indeed seem to have the original in it; the clerk is strangled and the text at the end is missing.

Four Color Fear is pretty cheap on Amazon and it's got some great stuff in it, so I recommend it.

It's actually very interesting to see them side by side and how the strangulation was taken out. Might make an interesting animated gif fading between the two!

Haha! Thanks Gumba, (at least you acknowledged it as so.) Unfortunately, I'd prefer to use scans from the original Black Cat issue if possible. Sometimes these new (and copyrighted) book collections alter or watermark their versions so I wanted to avoid using anything from it. I like your idea about an animated gif too... if you put it together I'd love to see it!

Love Powell and this story...I have a pre-code version...in Black and White!! Kinda pointless without color. I tip my decapitated head to you for another classic horror post, Killer Karswell.

Great LP by a classic band!
Cool cover "inspiration" too!!!

Thank you, Karswell! Whichever version it's indeed a surreal little thing. I'd been wanting to read it since reading page one in "The Horror! The Horror!".

Whatever the flaws of the story the PoV art more than made up for them. Do you know how hard it is to do PoV realistically?

Very, very hard. In my own cartoons I've long since stopped attempting it.