Ahhh, "Sundays with Mummy", if there's a better monstrosity to spend it with I don't know who, or what it is. Also, I do apologize for the lack of posts lately, it's just been another one of those months. I had originally planned an entire month of weekly mummy stories for May, but regretfully we are just now finally getting around to the first, this one from the June 1953 issue of Forbidden Worlds #18, (art by Harry Lazarus.) More on May Mummies after the story! 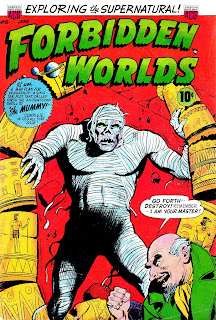 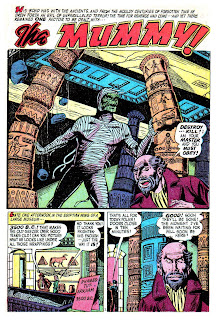 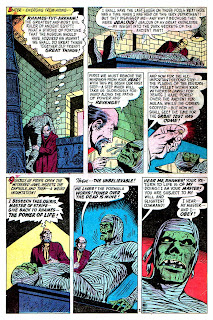 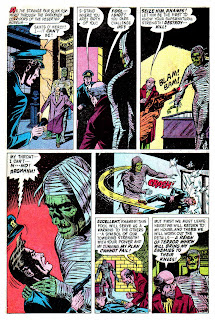 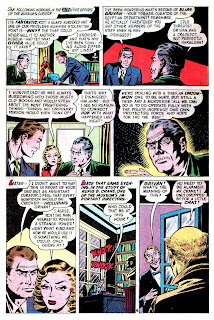 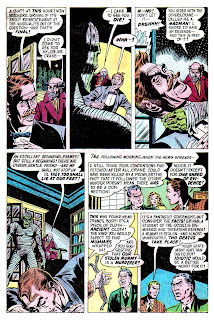 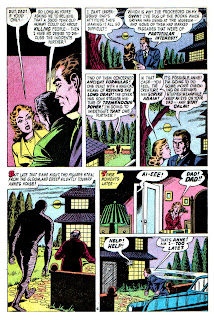 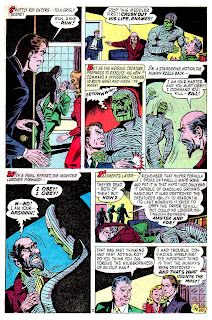 Come back next weekend for the Dell Movie Classic version of--- THE MUMMY with art by Jack Sparling (it will probably be another two-parter.)

(Thanks again to Tiffany Murphy for this great LIO gag!)
Posted by Mr. Karswell at Sunday, May 16, 2010

I've come to appreciate Forbidden Worlds as one of my fave anthology comics. Great stuff!

I AGREE WITH JEFF, THE ACG HORROR COMICS CONTINUALLY SURPRISE ME WITH GREAT ART AND FUN STORIES. THIS ONE WAS NO EXCEPTION, THANKS KARS! LOOKING FORWARD TO MORE MUMMYS!!!!

Cool stuff per usual. But, my man, I am dying for some Mummy ala Jack Sparling!

Thanks for sharing a fun story Karswell!!! I love ACG stuff. What a beautifully garish cover-- the kind I love.
The old "restoration pellet" gag :)
But, why is the Mummy "like" 7 feet tall? And he even seems taller than that outside the one victim's house?
best,
r/e

>I am dying for some Mummy ala Jack Sparling!

Be here in ONE WEEK then!

As noted above, the mummy's height is hard to figure. Based on page 3, first panel, I'd put his height at 8 feet tall. But on the panel below that one, he's got a head doubles in size but his hands are still about as big as some guy 8 feet tall. That said, I liked this mummy story and the way the mummy looks. Thanks for posting it! Looking forward to more mummy mayhem.

Willis O'Brien was rather disturbed by the fact that the directions for King Kong involved explicitly different sizes for Kong in different scenes. In later years, this deliberate (if questionable) artistic choice has been confused with a sequence of sloppy errors on the part of poor O'Brien.

Anyway, perhaps the resizing of Rhames was a similar sort of thing.

What I find remarkable is how, across various stories, the rather comic “EEYOWWWW!” is uttered in all seriousness by all manner of entities.

haven't read the story yet, looks great, but did you hear about Ronnie James Dio?...

now that i've read the story, i have only one thing to say- FRANKENMUMMY!!!...

Heard about Dio, everyone on facebook was talking about it yesterday, from its rumor state beginnings in early morning, to the eventual awful truth confirmed later in the day. Very sad news...

I love the girl's comment "I can't understand dad's attitude. He's making it all so difficult." "Why, of course a 5000 year-old mummy killed the man. This tiny piece of cloth PROVES it!"