If it suddenly feels like the temperature just dropped below freezing around here it's because THOIA is taking you for a little wintery slayride into the most frigid, blue lipped, teeth chattering corners of frost bitten fear! Yes, for the next few posts you are going to feel the cold claws of Death chilling your spine and... oh whatever, you get the seasonal theme. And if todays story from the August 1952 issue of Beware #11 reminds you of John W. Campbell's awesome sci-fi horror classic "Who Goes There?" then you my friend win a snowcone from outer space. 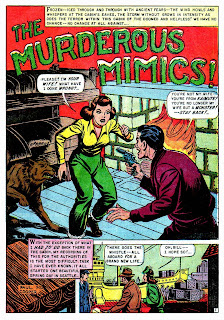 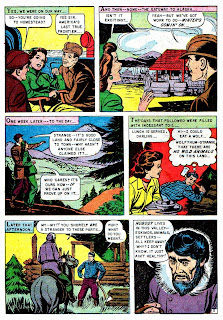 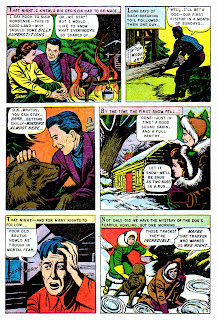 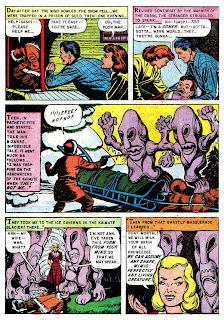 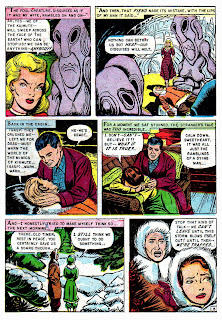 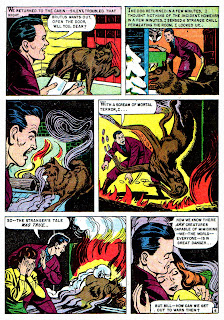 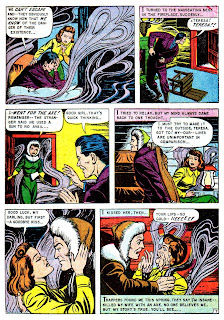 PS: I really like Paul Cooper's work on this story, and hope you do too. I have a half dozen other stories by him in my collection and would love to do a Coop feature maybe later next month. In the meantime, read another great variation on John W. Campbell's "Who Goes There?" in the THOIA Archive, it's---
The Beast From Beyond!

++++++++++++++++++++++
Christmas came a few days late this year, but by the eternal powers of darkness was it ever worth it! Find out what it is, and how it came to be, this gorgeously rendered art addition now gracing the shadowy, weird walls within creepy Karswell Manor! Click HERE! 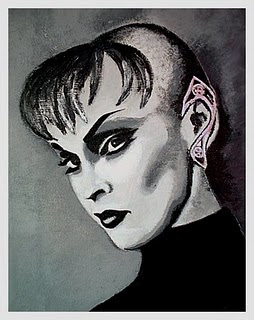 I can see why these creatures would want to take on the forms of others. They look pretty goofy in their natural state.

Karswell: I like this guy's stuff a lot, too. First word that leaps to mind is "solid." Solid construction, solid anatomy, etc.

Plus, the story is cool. I love how they turn to sludge when given the heat, or the heat of a kiss! What a concept. -- Mykal

PS: You knew Nurmi? I send you death rays of jealousy! -- Mykal

ohhhh, I've got the chills now!

>I like this guy's stuff a lot, too. First word that leaps to mind is "solid."

It's a great one from Adv into Weird Worlds #10, and possibly a collabortative effort with Matt Fox (?)

Yes I did, we were very good friends... more on that another time. Everyone check out Kitty's amazing painting and let her know what you think! I love it!

>ohhhh, I've got the chills now!

You just wait, we're just getting warmed up, um, with the chills...

Brrr. A real chiller this time. You just don't know who you can trust these days. That dog being thrown into the fire was pretty disturbing.

A good tale on a crisp Winter's day. Thanks Karswell.

You're intros are getting better and better, by the way.

This reminds me a lot of "The Thing From Another World," which predates it by a year. The imposter dog calls to mind Carpenter's version, which didn't appear for another thirty!

AMAZING STORY AND ART! AND TO PHIL VAS-CAMPBELLS "WHO GOES THERE?" IS WHAT THE THING MOVIES ARE BASED ON! KARSWELL MENTIONED IT IN THE INTRO

great art in comic book and portrait medium, how about that?...

>"The Thing From Another World,"

Yes, I highly recommend reading Campbell's original story, if you've only seen the film adaptations then you're definitely in for a treat. Most people tend to prefer the orignal 50's Hawk's version, but Carpenter's version to me seems to be more faithful to the book, it's not really a remake.

Glad to see everyone enjoying this post, there's more frigid fears coming up all this week!

This was a really cool tale, K, and congrats on the fine gift.

One of the things that's neat about Carpenter's movie is that it operates as both a remake of the original release (rather to a lesser extent), a remake of the Campbell short story (to a slightly greater one) and possibly even a sequel (since, in THE THING, the American base camp does not actually discover that thing). Plus it has all those excellent practical Rob Bottin latex effects.

All that said, I still prefer the Hawks movie. Not in comparison with other versions so much as for its merits as a film. In a vacuum, it's the version that most excites me.

Rarely in this day and age, or even in the fifties, can I find a film more dedicated to the nobility of its genre: there's no tongue-in-cheek cheapness here, no smirking insecurity, just a genius director pulling out all the stops to tell a story as well as possible. The characters are stunningly well drawn and charismatic, not a cypher or archetype in the lot, and the thrilling action is headlong and impressive. I'm not sure I've ever seen a fire gag in a closed-off room that made me understand the honest danger better than the one here.

Mostly, though, it's that scene where the scientists discover the outline of the thing in the ice, and spread out to reveal its unearthly shape, that really tips me. What a brilliant and cheap expedient for pronouncing the offstage reality of a flying saucer.

Oh heck, this isn't a film review blog. Hey! Nice story! I loved this interpretation, even if it never earns the paranoia that the original Campbell classic is noted for--though how possible would that even be with only three characters? Here the twist should have been that the woman was narrating. But no matter, this is the kind of rip-off I can get behind--steal from the best!

(The cover of this issue was also particularly fine, I thought.)

(As was Mlle. LeClaw's ridiculously cool acrylic gift to you. That Kitty sure brings a lot to the table.)

Karswell: I agree. I thought Carptenter's version caught the paranoia of the orginal novel best. I love the hell out of that movie. -- Mykal

I love both versions of the film, I grew up on the Hawk's version as a kid watching it on late night TV, but then the Carpenter version came out (around the same time I got my first VCR) and to me took it to another whole level... not just as another version of Campbell's story, but as Mr C pointed out, a visual feast that in my opinion literally defined the last truly great era of horror/sci fi movie special effects (before computers came in and sort of took over, for better or worse.)

Thanks again for all the comments... I'm running a little late on the next post but it should be up today--- so don't lose your heads!! (hint)

Can't get over the feeling something's gonna get me, now I'm all spooked out. The oldies were the goodies.