“Flash Forward Time Machine Days” will be a little different than before, as one day each week this month we’ll be looking at the influence pre-code comics had on more modern comics and creators. And today we'll start it off with a look at one of my favorite stories from the wild March 1984 issue of Twisted Tales #7, written by Bruce Jones and illustrated by John Bolton. 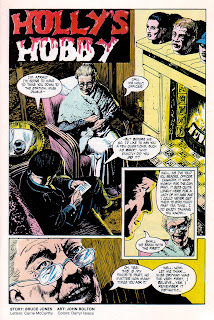 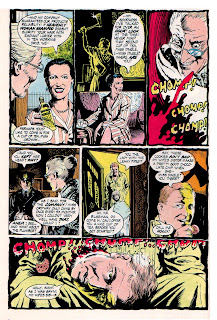 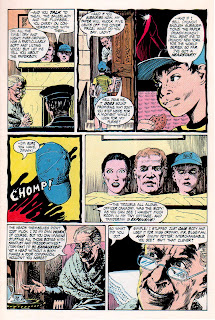 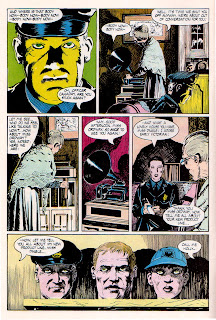 Other artists to look for this month: Mike Ploog, Bernie Wrightson and more! 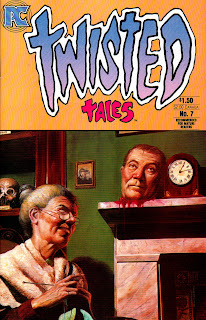 TOMORROW: Horror Leaps From the Pages! 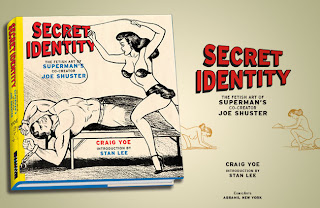 Last month I plugged Craig Yoe’s upcoming book "Secret Identity: The Fetish Art of Superman's Co-Creator Joe Shuster" (available in April) and last night Craig himself emailed in with more info. Craig says:
“I recently discovered incredible, previously unknown, fetish art by the creator of Superman, Joe Shuster. The artist and his writing partner, Jerry Siegel, had sold Superman for 130 dollars. When they sued to get the rights back they lost and got drummed out of the comic book industry and Shuster fell on hard times. It was unknown that to get by and/or because of a personal interest in the subject, Shuster then did S&M porn for under-the-counter booklets called "Nights of Horror," sold in Times Square in the early fifties. 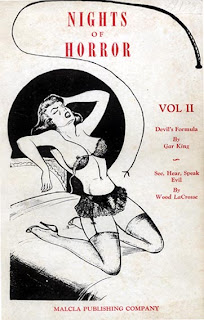 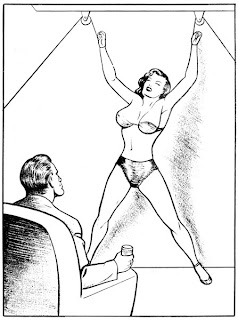 I have a full color coffee table art book I wrote and designed coming out April 1 (no fooling!) about all this, "Secret Identity: The Fetish Art of Superman's Co-Creator Joe Shuster". The publisher is the number one leading art book publisher in the world, the prestigious Abrams. I'm blogging about the book and revealing lots of rare art and info that didn't fit in "between the covers": http://secret-identity.net“Thanks for the update Craig!
---Karswell
Posted by Mr. Karswell at Friday, March 06, 2009

Ah, Twisted Tales from Pacific. Those were the days when comics were exciting.

It seems that every creator at the time was runing on full steam. Even Bruce Jones. Today I find his work nearly unreadable, but then he wrote a lot of stuff, and a lot was really good. Dear demented Miss Dingle :-)

My God... the housecleaning bills!

Good thing for Holly that none of the boys in blue down at the local cop shop were able to put two and two together and come to her house looking for their fellow.

Creepy old lady. Story is nice and short and fun.

GREAT STORY, VERY CHILLING. I LOVE THESE TWISTED TALES COMICS AND HAVE A BUNCH OF ISSUES MYSELF BUT NOT THIS ONE. NOW I'M ON THE HUNT AGAIN!!

It can't get much better than having a Bruce Jones/John Bolton team-up (except maybe Jones/Wrightson)! I absolutely LOVED Twisted Tales, Alien Worlds, Alien Encounters, Tales of Terror and all the other pre code-inspired horror comics of the '80s on Eclipse and PC. To me, this was the third "golden age" of horror, after the early '50s and the revival in the late '60s/early '70s. Ah, those glorious days when Creepy was still in print, and movies like Creepshow and Dead & Buried played on the big screen.

Sadly, almost all modern horror comics (and movies) pale in comparison, even anthologies like Trailer Park of Terror, which fail to capture the "feeling" that Bruce Jones and those cats knew do so well. Most modern shit seems to go for gore over atmosphere. Sigh.

Thanks for the Friday treat, Karswell!

I loved getting the new issue of Twisted Tales, when they came in. It felt like I had a creepy secret no one else knew.

Psychotic elder ladies = creepy as hell! A clever tale with great art, though the part where she killed the boy was a bit too much for my taste.

My art school thesis actually was a comic book called 'Twisted Tales'. I guess I should've known that such a cool name would already be taken.

Yes! I love these comics..i still break them out once in a while and still find them interesting and well done. The art and stories in these comics really evoked mood...you can tell they were a labor of love.

Forgot that I also posted a story from Twisted Tales #1 waaay back around Halloween 2007, you can find it here:

Couldn't have said it better myself, sfDoomed. I've actually been waiting to see more from this series myself.

I also guess this is the reason Shuster's eyesight got so bad......heh heh.

'Forgot that I also posted a story from Twisted Tales #1 waaay back around Halloween 2007, you can find it here:

Just read that story and it was absolutely brilliant. I, for one, would love to see more of 'Twisted Tales'.

Would everyone like to see more Twisted Tales this weekend? I can move some stuff around and give you a couple more, just let me know...

I really enjoy a good yarn that takes what you expect and totally turns it on its ear, of which this offering did a spectacular job. I had the distinct suspicion that the officer wouldn't get out alive, but the tale turned around and surprised me by revealing the end I expected already happened - Ha!
I'd certainly enjoy seeing more Twisted Tales, but then some of my first comics were from the series so they carry a bit of personal nostalgia for me.

This, now, this was absolutely brilliant. The only question is how Holly recorded her victims' voices in the LP era.