To further celebrate Kong’s birthday today we have a strange pre-code man verses gorilla horror adventure from Robert Q. Sale. It’s not a giant ape or anything but the story itself is hugely important in the Atlas / Marvel U as it’s the first official appearance of Ken Hale (aka The Gorilla Man), who would later re-appear in the post code superhero realm and rub hairy elbows with The X-Men, Avengers, the Howling Commandos Unit, and The Agents of Atlas. 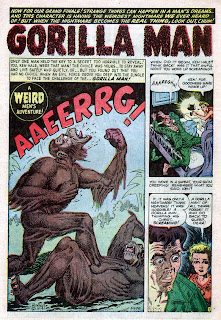 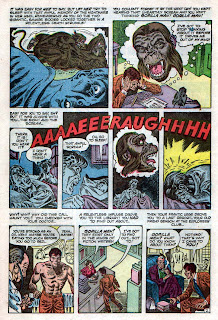 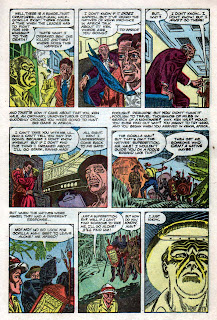 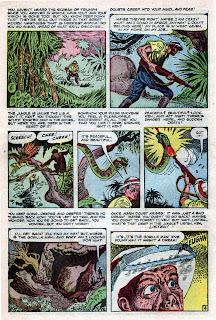 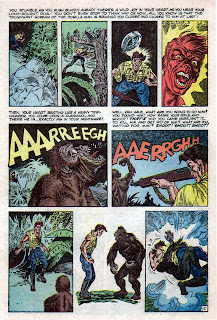 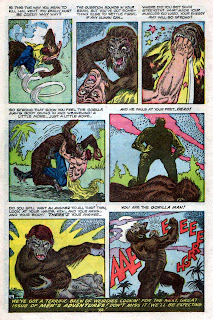 For more info about The Gorilla Man and his other incarnations click HERE.
Posted by Mr. Karswell at Monday, April 07, 2008

What the heck kind of magazine was this?

Considering the characters subsequent use by Marvel Comics, in the 1970's "What If The Avengers Had Fromed in the 1950's" issue and his later inclusion in the modern Agents of Atlas, I'm glad that you ran this story.

I hadn't seen it before.

INTERESTING POST.......HOW DOES HE BECOME THE GORILLA MAN THOUGH? JUST BY FIGHTING ANOTHER GORILLA? KIND OF VAGUE, REAL NICE ART THOUGH.

Not sure I understand it, but it's still strangely effective. Cool art, especially the sequential panels at the top of pg 5 underneath the narration, leading to that awesome "crazy face"!

Anybody else notice that the Gorilla Men have long tails on page 1, but then none later on? Or the amazing standing tie trick Ken pulls on page 3! That's zero to 60 in .5 seconds, I'd estimate!

And of course the depiction of the natives here kind of defies summation. Makes you wonder if people in the US before 1960 or so had ever even SEEN an African before.

So were all of the "Weird Men's Tales" in the second person? It's a tactic that works sometimes but others kind a falls flat, imo.

Sorry, it's pg 2 where they have the long tails. And Ken's shirtless exam kind of hints at his hairy ape nature, maybe?

>What the heck kind of magazine was this?

Atlas Comics Men's Adventures series started off as a war comic but shifted gears at issue 21 when the pre code horror phase exploded. It went 6 creepy issues (a more adventurous genre mix of tales with a horror slant) before finally turning towards past heroes like Cap, Subby, and The Human Torch for two final issues.

>Agents of Atlas, I'm glad that you ran this story.

Glad you liked it Chuck. I enjoyed the recent Agents of Atlas mini series until the final issue when the Yellow Claw turned into Mr Cuddles, but fun to see those golden age Atlas characters teamed up again.

>And of course the depiction of the natives here kind of defies summation.

True, but that was more than 20 years earlier! And I submit that even the Kong natives weren't THIS bad. :)

the monkeys only have tails in his dream which possibly means something else psychologically.

Thanks. I wondered if it was like Men's Pocky.

This WAS a famous story,i think it was Don Glut who recomended Hale and the Human Robot for that story.there's a similar story called "werewolf" in CREEPY#1,so either this story was an acknowledged classic,or it has a forerunner,anyone know of any similar stories that predated this?.

I love to see these hidden treasures. Thanks karswell!!!

>anyone know of any similar stories that predated this?

There's a Jim Dolan story called "The Gorilla Man" in the July 1940 issue of Slam-Bang Comics #5 but I don't know anything else about it:
http://comics.org/details.lasso?id=886

>I love to see these hidden treasures. Thanks karswell!!!

Being a gorilla doesn't sound delicious to me, either.

My favorite part is when Hale and the Gorilla look at each other in silence for a second, then jump into it.

This story's insane!
I am really a beast and I've always been one. I do not belong in this world.
It's the Men's adventure fantasy.
The magazine men's adventure books had sexy women in them but this seems to be the kind of tales they would tell inside. It's like the adult magazines mated with Atlas horror comics.
The ending made me look over the story to see if I missed something.
The suspension of logic doesn't ruin the story because it's so odd.
The Africans were probably based off of Tarzan movies.
There were a whole string of Tarzan movies made with different actors in the fifties.
The days before Google image.