The Horrors of Crime Week continues, and here’s Rex Lane again in his third and final THOIA appearance. Today’s story though is actually his very first appearance in Atlas Comics’ Young Men series, (I sort of posted them in reverse order--ooops.) But whatever, for anyone who’s a character completist you now have them all... you can re-read the other two spook-tacular “Solver of the Supernatural” adventures HERE, and HERE.
From the June 1953 issue of Young Men #21 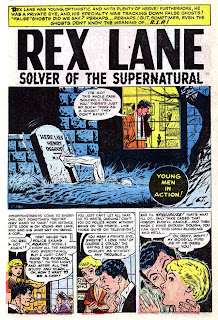 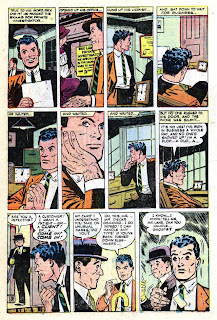 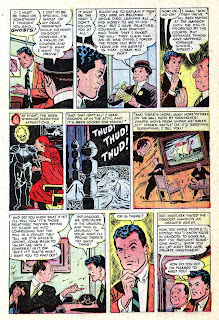 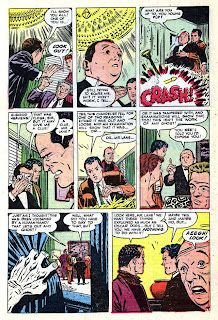 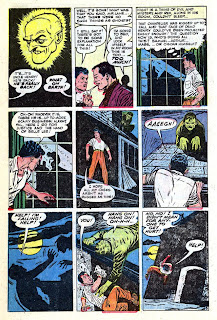 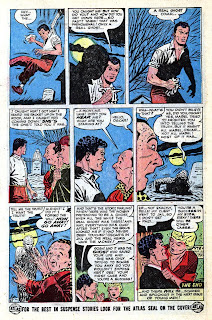 Mucho thanks to Dave for the great looking scans!
Posted by Mr. Karswell at Friday, April 25, 2008

Rex Lane was a well drawn, fun featurette, and while he's certainly no Ken Shannon, the "Solver of the Supernatural" ain't all that bad.

So what's one tap for the next theme week?

MAN ATLAS REALLY DROPPED THE BALL WITH REX LANE. TUSKA COULD HAVE EASILY HAD HIS OWN SERIES WITH THIS GREAT CHARACTER BUT I'M SURE IT WAS TOTALLY OVERLOOKED. IF I LIKED HORROR IN THE 50S I DOUBT I WOULD BUY A COMIC CALLED YOUNG MEN THAT ALWAYS HAD HOT RODS FEATURED ON THE COVER.

I love that these Rex Lane stories never cop-out and the ending always contains a supernatural twist despite Lane's attempt to prove otherwise.

If Marvel collected these 3 tales in a nice squarebound tpb I'd buy it.

I can't believe that in the 50's all you had to do was hang an investigator's license on your wall and people would appear at your door. No need for any advertising or anything. "I've been in business a whole day, and no one's showed up! I'm a flop..." A 'whole day', really?! Imagine the kind of business one could pull in if they put an add in the paper!

>So what's on tap for the next theme week?

Well since you asked Chuck, I'm taking a mini vacation this weekend so I'm turning the blog over to Brian Hirsch again. No one seems to have had any complaints yet about his awesome submissions, so expect to see another story from The Thing tomorrow, and a choice cut from Dark Mysteries. You'll know I'm back on the attack when you see another Reed Crandall post. Plus! Later in the week a Guy De Maupassant classic from yet another contributor, and more! My overworked scanner thanks you all.

FYI: All apologies. Due to totally forseen circumstances there will be no post this Sunday... and while this temporarily breaks my "Updated Daily" rule, you can rest assured that this omission will be made up for on Monday with 2 posts. Have a great weekend!

Great post today. This one was really cool. I really like the first panel on page five there.

I've been waiting for this one, thanks Karswell!!!

"Now, you awful people!" This is TOTALLY how I'm starting all my business presentations at work from now on! It'll be my catch-phrase!

I gotta say, I dig Belle's short hair in this one rowr! However, having seen the other tales, I don't buy Rex as "too light" for the police force...unless he got fat off all his ghost money in later tales! :)

Fun stuff here--that ghoul on the roof is a neat, scary drawing, even if it is a fraud.

"Night is a thing of evil and mystery..." Love that writing.