How to be a Gracious Ghost!

Originally printed in the June 1957 issue of Strange #2 (Ajax; Farrell), this is a fun little post-code horror parody of Charles Addams' Morticia character (and also Vampira), re-named “Emily Ghost” starring in her one and only comic book appearance ever. It’s too bad too, this is really really good stuff. Anyone know the artist? 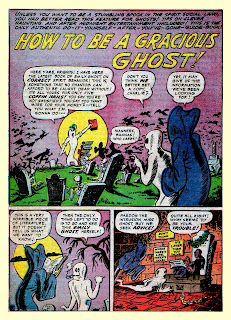 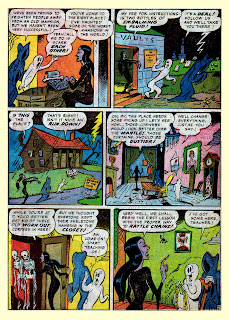 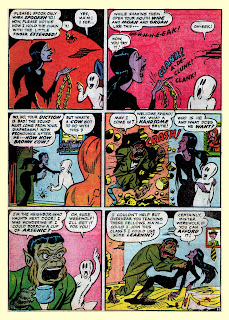 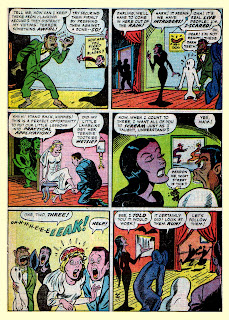 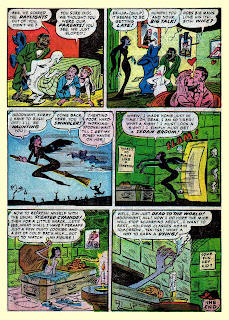 I love how she walks with her arms outstretched,hilarious. And you can't say she was a swindler,she seems to be an expert on being a zombie,ghost,witch,vampire etc.!

Emily Ghost, ha ha ha. I love how the newlyweds are more repellent than the monsters.

Emily could have had a great career hosting a horror anthology comic.

NOW THAT WAS ALOT OF FUN! LOVE THE ART. YOU COULD PROBABLY CREATE A WHOLE NEW BLOG OUT OF ALL THIS FUNNY STUFF YOU HAVE TOO KARSWELL! KEEP 'EM COMING, HALLOWEEN TIME IS ALSO A TIME TO LAUGH

you bet! loved it!

The Nostrand post was good but this was even better!

Ha! Yeah, that did it for me too, Professor. I may have to drag that phrase out of retirement.

Very cool! Who would a thought a post-code Ajax title would have anything good in it?

Great, and very MADdish. I'd guess Emily is Morticia's twin sister she doesn't get along with. (Or possibly clone.)

Madish indeed. I think this may have been intended for Madhouse or Bughouse. I will compare the art. Thanks for this, I will include it in my article on Mad imitations for Alter Ego (to be announced soon).

Got lots more fun horror parody stuff like this in the weeks to come leading up to Halloween, this Saturday in fact is dedicated to it. See yas!